I’ve just found a handful of old 78’s that SWMBO bought from a junk shop and was going to frame (never happened, what a suprise!).

I am currently Digitising my LP collection and have already recorded a couple of 45rpm albums at 33 rpm and then ‘sped them up’ in Audacity.

Qustion is can I use the same technique to capture the 78’s without damaging my (aging) Troika? I understand there are differences in the geometry of the grooves - can anyone elaborate?

No way should you play 78s with your Troika. Sorry.

I only know about AT and a simple AT-VM95C works decently with 78s and is very low cost. There are more specialized available at a price.

Also note there is a completely different equalization. And several different ones. But you have probably already seen the info on this at the Audacity site. Also look at the Graham Slee site they have the special EQ-handling covered.

And you will be recording record noise at 33rpm that will come out a bit unnatural when you adjust the playback speed to 78.

Another possibility is to find some service that do this for you.

I wonder if your wife/other half didn’t have the best idea in the first place!

I’ve never thought of using records, even 78s, as room decorations - although I do see occasionally pictures of LPs being used as clockfaces - you just buy the hands and a mechanism that fix into place behind the record, which is then mounted on a wall.

PS I’ve just checked online. The thing is called ‘Vinyl Guru Clock Kit’. I’m sure that other brands are available.

I must admit that I’m intrigued, and may follow this up, if I can decide which LP to sacrifice - perhaps a very old LP of ‘Grace’?

AlieExpress is a good source of clock movements, this one has been working accurately for several years now. 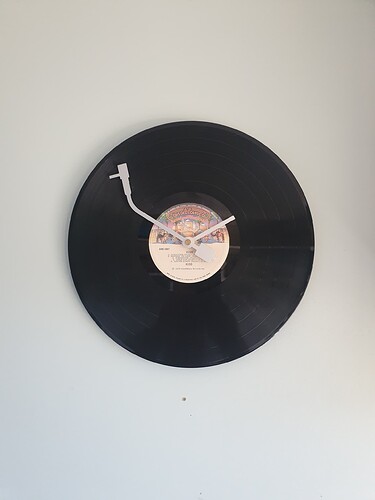 I would be extremely wary of playing 78s with a fine hifi stylus. Some moving magnet cartridges used to have an option of a swap-in fat stylus for 78s (Shure in particular used to do this). Otherwise:

When I inherited a couple of 78s of my grandfather singing, several years after selling my TT, bought an Ion TT with USB output through eBay for something like £20-30. It claimed to play 78s but didn’t have 78 speed, and I don’t recall if a separate stylus (if not I would have reasoned it would have been a robust spherical not elliptical so not worried about damaging the stylus). The Ion is clearly not hifi - but then neither were wind-up gramophones with steel needles… And whilst the geometry and playing characteristics of the Ion would differ from that of an old gramophone, any artefacts from such play are probably far less significant than the quality limitations of said old gramophone.

I fed it into my laptop and used Audacity to adjust speed, and also to clean up substantially, and apply some tone correction to make it sound as best I could. It is too long ago to remember all details: I’m guessing the Ion RIAA corrected, which of course is not applicable - I don’t recall whether Audacity may have corrected for inappropriate RIAA correction, but I recall playing tweaking a bit myself beyond whatever Audacity did. Once happy I burnt to multiple CDs, made a nice label, and distributed to all family members. (Everyone was pleasantly surprised to receive it, and several commented it sounded surprisingly good for the ancient 78s they were.) I then sold the Ion TT for about what I had paid - and have the original 78s sealed up and stored safely.

The family Decca radiogram in the 1970’s was fitted with a ceramic cartridge that had a stylus assembly that could be flipped over to play 78’s… two styli on one cantilever.

Thanks for all the replies.

I might just try and get a cheap USB turntable off a certain auction site just to satisfy my curiosity.
I saw that Audacity does have corrected equilization for 78’s so could open up a fun little side project.

I’ll have to get onto SWMBO to sort out getting them on the wall!

Rega do some 78-specific kit - dedicated turntable and suitable cartridge. Hardly a cost-effective solution, but it’s an interesting rabbit hole…

Whilst it is probably less than ideal (for the stylus) to use an expensive delicate hifi stylus, and a standard stylus in the days of those being available on moving magnet, and before that crystal, cartridges, was indeed a lot larger and conical, closer to the original steel needle in shape, I don’t think information would be lost using even a fine eliptical stylus: The groove of 78s was modulated horizontally (wiggles from side to side), and not the dual 45 degree modulation of a stereo microgroove LP. Whether additional surface noise would be picked up I am not sure. And how well the lightweight tracking of a hifi stylus and cartridge would manage to follow the larger, more heavily modulated groove of a typical 78 I also don’t know. Only a guess, but it may be that a simple lo-fi record deck like the Ion might be more robust and better able to track a 78.

AT make the AT-VM95SP for 78 playback. The stylus is 3 thou diameter Vs 0.7 normally used for stereo LPs. Although technically incorrect RIAA eq produces pretty good results with most 78s. I’m quite happy playing 78s through my NAC72 using my AT-MONO3/SP.

Of course, you could always get one of these:

and one of these:

And use room positioning for each to get best recorded sound…. Then if your system is fairly neutral sounding that might give a more authentic representation of how the disks sounded to people back at the time of release (or rather after however many plays they have had).

Nah, the early 30s audiophile would’ve had an EMG or Expert. Compton McKenzie, founder of Gramophone magazine, had both: 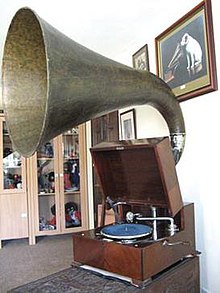 E.M.G. Hand-Made Gramophones Limited was founded in 1923 by Ellis Michael Ginn (whose initials gave the firm its name). Its object was to build and sell high class acoustical gramophones. E.M.G.'s first model was the Magnaphone, demonstrated and sold in Brighton in March 1924. Following the Brighton success, the firm moved to London. In the Steinway Hall Gramophone Tests of June 14, 1924, sponsored by Gramophone Magazine, E.M.G.'s Magnaphone was awarded the Silver Medal. Following these Tests, C...

It would be instructive to try - but I suspect you’d be tracking the debris at the bottom of the groove… almost certainly not the sides.

There’s some pretty good diagrams of groove geometry on t’interweb.

If you know someone with a gramophone you could borrow, making a room recording of it would be fun! I think I’d use a stereo pair of mics though - it would better capture the sound in the room.

Take care with the needles though - most 78s are already worn enough!

It’s not I who wants to do this! (If you read further back you’ll see my note describing my own transcription of 78s)

I know. But it was you who suggested an ‘acoustic’ recording!

I might try it; but I’ll have to borrow the mics back from my son…

I used to have a Rega 78 which I bought specifically to copy my collection of 78s (all inherited from relatives and neighbours). That was copied to cassette using my Nakamichi CR7. Good turntable and cartridge. Sold it a few years ago, having just kept it stored in a cupboard for a long time!

I came across a P78 for sale at a dealer a few years ago. Since I have a stack of 78s in a box upstairs I was seriously considering buying it, but thinking it through decided not to. If the dealer hadn’t been a hundred or so miles away and I’d actually been there I might have succumbed!

Maybe I should look more closely at the disks to see if there is anything of significance. Many of them are 12” V-Discs from the 1940s. Unfortunately I recall being told that many were wrecked after being played with a damaged needle, leaving a pile of shavings…