I’m a happy owner of a Planar 6 so much so that I’m considering upgrading to the P8 the only problem is I’m really not keen on the skeletal plinth and like the dust cover even less.
So I’m considering just upgrading the the RB330 to the RB880 how much of an improvement do the forum Rega owners thing it will bring? It’s not a huge outlay probably about £300 after the RB330 has been sold.

Beauty is in the eye of the beer holder

I personally think my P8 is a thing of beauty…and I’ve always removed the lid of any turntable I’ve owned…(one or two!) So the slim and simple cover is great for me

However…if you don’t like the looks…then the arm alone may be a step in the right direction…but I would get the whole package, as it just works…and is designed as such 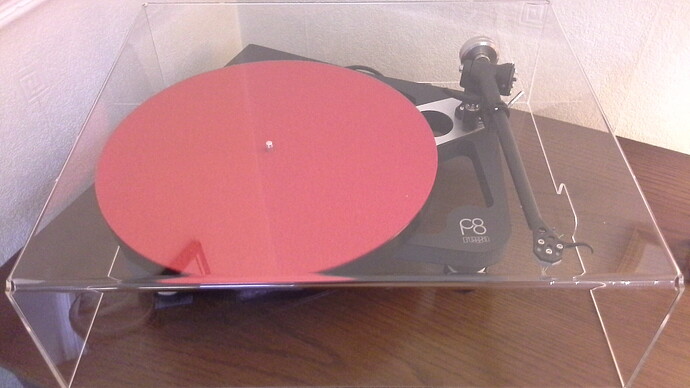 As I understand it the 6 has specially selected RB330 arms, with higher tolerance bearings and the silver counterweight, so it’s not your big standard 330 as on the Planar 3. The nice thing with Regas is that they are designed as a package so I’d either stick with it or swap the whole thing. I read somewhere that the 8 is not massively better than the 6 and that it’s the 10 that provides the big step. I’m not sure which cartridge you have but the Ania certainly provides an excellent match so could be a better way to go.

Have a P8 and yes it looks different… but not ugly. It’s easy to get a rectangular Perspex cover to fit over it or even sized to the stand you place it on thus replacing the lid that comes as standard with the P8.
Uplift is worth the money IMHO

Thanks for the replies so far.
I have a few carts including a an Audio Technica AT 150EA, a VMN50SH, a Goldring 1012GX and a Dynavector 20x2L which is just about to be sent away to the Expert Stylus Company for a replacement tip so I’m not sure the Ania which does seem to divide opinions will improve on either of the AT’s or the 20x2L.

I know people really enjoy the look of the P8 and it’s certainly striking but my preference is a more traditional look but if the improvement is large enough then I suppose I could learn to live with it.

My dealer finds that the biggest jump is from P6 to P8. Less between P8 and P10.
Last year I had the Rp8 and compared to Rp6. It was clearly better, more assured, with better bass, and bigger sounding.

Did you compared on a same system, same cart, same phono?

Yes, I started with a P8/Apheta 3/Aria had it for about 3 months and along came a nice kind dealer with an offer I couldn’t refuse to swap out the P8 for a P10. So glad I took up the offer. I have a Nova and 250DR with the P10 (which some would probably scorn at), however although the P8 is a great deck and could have happily lived with it, the P10 is a huge emotional step forward. I just now await delivery of the Morgana’s for the icing on the cake…

I had the P8 for a year but sold it. It’s so tiny and invisible in that it never created any emotions for me. I realised I wanted something to look at at the top of my rack and P8 is not such a player. What you see is an arm, platter and some foam and I lacked the beauty of a plinth. It sounded great though.

I sold it and bought a Vertere DG-1 and never looked back.

The P8s looks are like marmite, you either love it or hate it. The P10 adds the white ceramic platter and visibly flash tonearm…like marmite on marmite. Fortunately I love marmite

Ok, i believe you. Just wondering if a Nova is not limiting it a bit?

Quite possibly, as is the Aria. If as and when I decide to upgrade the Nova would be the focus of attention with possibly the Aria next up. There is always a weakest link in any Hifi chain, however the fact that I hear a difference between the P8 & P10 at least equal to the difference in price tells me that the Nova is holding its own with no doubt the NAP250 a welcomed accomplice for now…I will await the arrival of the 272.2, 572 or SuperNova…whichever comes first

I listened.
I immediately acclimitised to the skeletal plinth.
(P10)

Which will be superseded by the BlackHole?

Which will be superseded by the BlackHole?

The black hole comes along at the same time as the SuperNova…when you check your finances after the purchase!

P.S…the Nova is very under appreciated you know