I notice that ebay is thick with various regulated, audiophile, DC power supplies. I’m looking at one now that is 50VA, dual 12V DC output, that certainly reads very well and it’s less than a ton delivered to the UK and that includes VAT (apparently all ebay purchases from abroad now include VAT by default).

What’s the opinion on these…? I mean the specs. certainly tick all the boxes and the price is quite reasonable.

Hdplex is specially good, but not with “China “ prices. More in the 600 dollars level. With dual outputs.
@charlesphoto should know more about Chinese lps.

I have a couple, but I guess it depends what you are using it for. If for a top level like a streamer or DAC, etherRegen switch, etc then you are better off with an Uptone, Farad, Paul Hynes, Teddy P, Sonore Ultra, etc LPS. But in the Chinese camp, I use a 12V 6a ZeroZone for my NUC server, and a real small cheapo for my turntable (which has an ADC), modem etc. The Keces and HDPLEX are good Chinese made ones as well, but approaching the price of the top level ones, though have bigger outputs and multiple rails.

In my system rated best to good I have a 7v Sonore for the opticalRendu, Teddy P 7v for the office microRendu, and Uptone 1.2 at 5v for opticalModule. DC cables make a difference too.

I should add that with the Chinese LPS’s you most likely won’t be doing any harm, but you may not notice much of difference over a good wall wart like the Uptone one that comes to charge their LPS 1.2 and power the etherRegen.

tbh my first idea was a way to replace two smp with a single unit, to reduce box count. Then I went on ‘the bay’ to see what was around and then moved onto dual output lps units. Then I started to wonder just how good these chinese products are. I have a few devices using smp and I like the idea of lps if for no other reason than to reduce mains and airborne noise! I’m often tempted to make my own (I have in the past designed and built power supplies for analytical equipment but this was 30 years ago!) but if you can pick up a dual regulated lps for eighty quid ex vat then it hardly seems worth it.

Alliexpress is your friend. You have on Amazon too. But I doubt you will find something really better than your SMPS, with dual output, under 200 dollars.

You can try and return…if not satisfied.

I have bought a few via eBay. I have had a good result with a couple …but, no CE and you have to keep a close eye on the components. I would place them at a similar level to SBooster.

However, I have found that context matters. The SBooster has a synergistic relationshop with the Chord Qutest, the ZeroZone didn’t come close. This makes buying via The Bay problematical, no easy return route.

Personally I have decided not to buy direct from China any more. I have toyed with buying some of the higher ensd PSUs, but always think that it is the sort of money I would rather be spending on a ‘proper’ component; I should have been enured of this by Naim PSUs by now!

If you’re buying from a more or less unknown supplier you need to be wary. Not that you will always get a poor product, but there are plenty of fakes out there. That includes certification such as CE marking, EN and other safety standards which can be either missing, or stamped with fake markings. If such a product fails and burns your house down, your insurers may not pay out.

Personally I have decided not to buy direct from China any more.

I would say this is pretty generalized and I would only apply to the generic power supplies. There are some very good mfg coming out of China atm; the Matrix Audio DAC I just bought for the office is superb.

Yes, one to watch out for is the notorious ‘China Export’ mark.

I did mean PSUs.

Two zero zone ones here, well made and safe, and they where rated highly in reviews. Ones on my phono amp the other on my Roon core. Orders some Canare powercables all works well.

I bought a 24v one from China for my turntable. It was not expensive (about $120) and after ordering it, I suddenly got very concerned about the quality and wondering if more reasuringly expensive options from MCRU in the UK or some local Japanese made ones would not have been far wiser.

Anyway, the unit arrived and the build was impeccable. Under the hood, the board layout was well thought out and the few discrete components and point-to-point solders were absolutely first class.

I then used an EMF meter to compare the noise to the wallwart and 60 v/m became 0 v/m and the uT reading at 15cm was around 0.2 uT. Voltage output was rock steady.

Packaging quality leaves something to be desired. As did external labelling. No indication of input or output voltage on the unit itself. I had to look at the inside to confirm that. I think if the unit you are powering warrants a LPS but cost-wise not an expensive one, the Chinese made ones are both effective upgrades and good VFM.

Well, as a test, I’ve spent the USD100 on a 12V lps that has an R-core transformer. My feeling is it can’t be worse than the generic ‘pregnant-plug’ smps I’m currently using. When it arrives I’ll get the 'scope out and do some back-to-back testing.

Meanwhile what about the ifi iPower 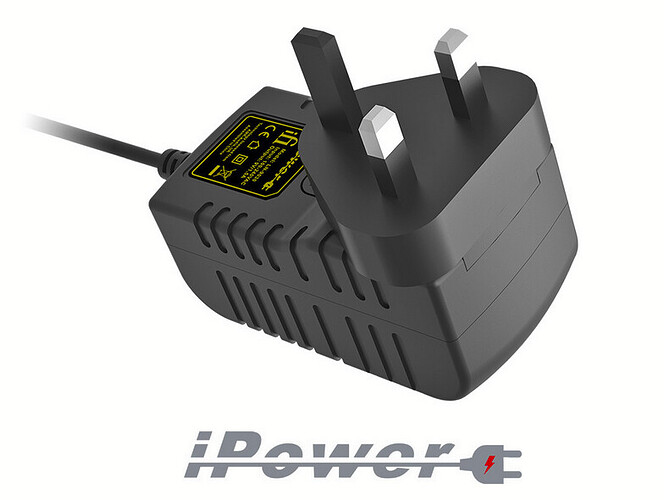 Yes it’s switch mode but the reviews are very complimentary.

I wouldn’t bother, or at least go up to the iPower X. I’ve had a few of the basic (two now sold) of these and good for things like modems etc, but I actually found the $15 charger from Uptone for their cap supplies to actually sound better, though it’s 7.5V only. So any well made SMPS will do about the same thing as one of these. Again, if you are going to power anything more top level, or plugged in with other top level gear on the same circuit, then go for one of the LPS I listed above.

I suffered a 50% failure rate with the ifi Power wall warts that I bought.

I bought a Chinese 5v lps off eBay. It had an intermittent fault, which turned out to be a dry joint, but most disturbing was that the all aluminium enclosure wasn’t earthed, which I believe makes it illegal (happy to be corrected on this). Apart from the fact that it could have killed me, I thought that it was very good value for money. But as a door stop, 50 quid is a bit steep!

, which I believe makes it illegal

It’s certainly possible the items purchased overseas would not meet code for sale in your country. But earthing the chassis is not mandatory. Many hifi goods made in the far east use no earthing at all. Some very high end stuff even. My Luxman amp costs the same as a SN3 and is a non earthed design despite being a solid machined chunk of aluminium.

In my experience a lot of products from China are good. And a lot are rubbish, or quality control very poor so it could vary from example to example. Some find their way into high quality products nominally produced in the West (I assume with appropriate testing and certification), more often than not without the consumer even being aware. Some are sold rebadged in the West at many times the cost direct from China, with test/approval markings (which if legitimate and with duty paid makes them legal) - without the average consumer being aware unless they scrutinise small print.

If one buys electronic items direct from China there is a good chance that it may not bear all the safety and associated compulsory markings, and even when it does they may be fake. (Of course, the same can be true if bought from an unscrupulous supplier in the West, which may be more of a risk because one may be more likely to trust the declarations). That doesn’t necessarily mean they don’t meet safety standards or unsafe, but you don’t know unless you are in a position to test yourself, or have it tested. It might be illegal to import even for personal use something not bearing the appropriate declarations (it is some time since I delved into the relevant legislation) - and certainly would be illegal for you to sell on to another person. You are of course liable for tax and VAT upon import (which might not be charged).

Would I buy/have I bought electronic goods direct from China? Yes, given the price differential, they can be excellent value for money - but I would give them a thorough inspection and depending what it is I may carry out a number of safety tests to satisfy myself, and may modify the item (often essential at as far as the supplied mains plug or adaptor is concerned).

N.B. For clarification my term ‘in the West’ is based primarily on awareness of the position in UK and EU.