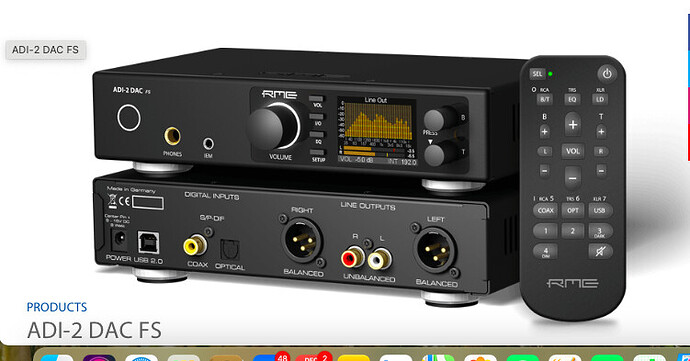 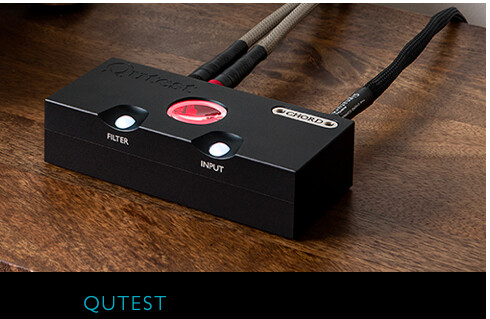 Does anybody have experience of these two?

Part of my long term planning is to move my UnitiQute from the AV side into the Audio side and install a dedicated DAC into the AV system. I am strictly 2 channels , but these two would clearly be front runners, at the same time a Mac Mini would be added to the AV set up for films, music , photography and er maybe , just maybe Tomb Raider 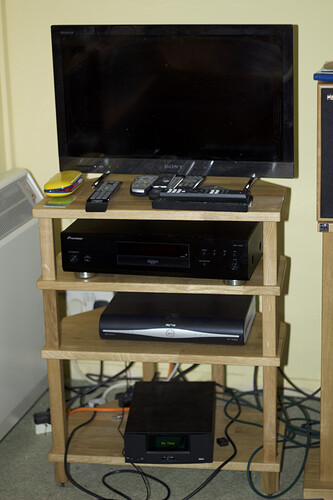 Do you know if the Qutest is the Hugo 2, but without the bits that make it portable, batteries and the volume control?

I ask because I haven’t tried the Qutest, but I have tried both the Hugo 2 and the Hugo TT2 both of which I found highly resolving DACs.

I have the RME and love it, sounds sublime to me all inputs sound great outputting to the powered speakers I have or via it’s headphone stage (it’s primary use) feeding my Focal Elears. It’s pretty immune to usb gremlins to. I prefer the looks than Chords odd aesthetics, you can turn off all the display and lights if needed and its significantly cheaper. Most reviewers put it on par or better than the Qutest. But like all these things its down to the user as to what they prefer.

Do you know if the Qutest is the Hugo 2, but without the bits that make it portable, batteries and the volume control?

Basically yes as far as I am aware.

Thanks, @Naim_The_Dragon I thought I might have been told that at some point. One of my reasons for experimenting with these devices was to avoid the expense and accommodation required for a Naim pre amp, so you can imagine my disappointment when the Chord Hugo 2 didn’t work for me as a ‘digital-only’ pre amp. I still don’t understand why the Hugo 2 > NAP300 combination sounded as it did in my system. The chord DAC isn’t short on output voltage swing and has one of the lowest output impedance of any DAC I have checked, so I can’t see that driving the NAP could have been the problem. This put me off trying the RME DAC for some time, until I was persuaded by a fellow RME user.

To my pleasant surprise, the output from the RME ADI-2 works absolutely fine straight into the NAP. The balanced output also works really well into my small Yamaha active monitors, so much so that I am very tempted to try a pair of Neumann KH310 Studio monitors, one downside is that they aren’t intended for the domestic market and definitely do not look lounge friendly but the specs and the reviews look the business. 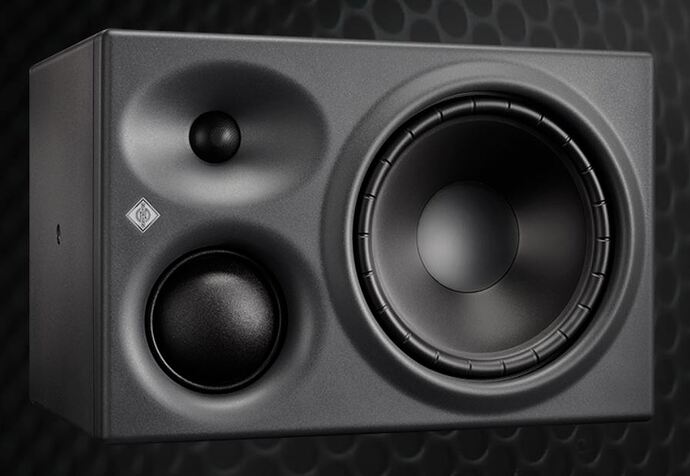 Could be a very expensive experiment though.

Googled these Neumanns — they look like really well engineered active speakers. Very intriguing indeed… Be careful @Roog — they might leave you with a big hole in your pocket…

I think they are interesting, I quite like a direct sound but these may be a touch too much. The types who review these things aren’t HiFi buffs and so their opinion is likely to be swayed by their particular needs, but with PMC and ATC, both companies renown for their studio monitors who have successfully broken into the Domestic HiFi market I may not be alone in thinking that ‘Accurate’ and ‘Direct’ is good!

They are quite small and would need a stand, although I suspect the studio types would be happy with a simple vibration-absorbing rubber mat and locating them on a solid piece of furniture.

HiFi Critic has run a few reviews of active monitors in the past and I seem to recall that despite the under lying prejudice against pro kit in the HiFi world, they fared well.

I have no experience of RME DACs, and tend to like Chords, but a Naim V1 would also be on my shortlist if you’re using a computer in front of it.

My understanding is that whilst the Qutest is the Hugo 2 DAC minus the stuff that is, for me, extraneous there is a slightly different implementation but no discernible difference in sound.

RME was on my shortlist but my expectation, which may yet be confounded, is that it’s really going to be NDX2 + Zenith versus TT2 + Zenith. You never know though. It’s a family decision and we may just prefer the Qutest.

The balanced output also works really well into my small Yamaha active monitors, so much so that I am very tempted to try a pair of Neumann KH310 Studio monitors

I have run the RME (fed via USB from a NUC Windows box) as balanced XLR DAC/pre for a pair of Dynaudio active monitors sitting directly on the desk using the IsoAcoustic stands they came with. It’s great near-field as designed, but was also fun at the other end of the room for sofa listening. No idea if it will suit your main space, but the Neumann are really sweet looking and always review well (including in Sound-On-Sound). I looked briefly online, but chose a turntable and moved along …

I have a Qutest and I used to own the RME DAC. I am afraid I found the RME rather brash in its presentation with the settings straight as it came out of the box and could only tame this by using a NOS filter setting which rolled off the top end with a resultant loss of top end detail. Also, despite the manufacturers protestation to the contrary I definitely found that the sound improved by using a LPS power supply (I used a Farad Super3). I am much happier with the Qutest and do not miss the RME at all although I admit to using a LPS with the Qutest to get better sound quality but not to cure the issues that I had with the RME sound. There are these recent reviews on the WAM forum of the Qutest which surprised the reviewers. So much so that they bought it.

Here is Martin Vs (Mr Underhill) review of the SBooster and Zero Zero LPSUs for the Chord Electronics Qutest. These items are his personal property and he is aware of Chord Electronics views on add on LPSUs. . Over the last few years my system has...

My temporary near field set up using the RME + Yamaha HS monitors really surprised me, the Yamaha’s are not known for a HiFi sound but the effect for me seemed like wearing big open backed headphones, impressive.

Whilst I would love to try the much bigger Neumanns there isn’t much scope for home trial without committing to significant expense and the boss may have something to say about having a second set of speakers in the lounge. They are a big too much to perch on my desk!

If I get the chance to trial or come into money I would be very tempted to try, if only for an alternative sound.

When you have your demo make sure Doug Brady uses the zenith in roon experimental mode or zenith player mode into the dac. It sounds ds considerably better that way than as a roon player which is how they usually run it

Thanks, that’s useful to know. It’s nice to have a month off work finally had something to look forward to.

I have the RME, I did try an older Chord DAC the Qute prior to getting the RME and did enjoy the Chord’s performance but didn’t like the user interface.

Once I tried the RME I didn’t think it lost out at all to the Chord in terms of performance and with the added flexibility, excellent headphone out and price advantage I think it’s one of the products of the year (my year).

It’s made a lot of waves very quickly

I can see why HiFi types don’t immediately warm to the RME, the fact that it is from a pro background, (meaning that it must be dull) I bought mine from a studio equipment supplier! and its diminutive form, ( so it must be a toy), but there is no denying its feature set, flexibility, build quality for the price and its very grown up sound.

Accurate and good are what I look for in a speaker, I want my speakers to be presenting Joan Baez or Eva Cassidy as close to the original as possible - without coloration .

When you have your demo make sure Doug Brady uses the zenith in roon experimental mode or zenith player mode into the dac. It sounds ds considerably better that way than as a roon player which is how they usually run it

Is this not something I can enable whilst I’m there?