Hi there folks
I’m new to using Roon. It keeps asking me to backup it up.
I moved my music library from my Qnap NAS to an Audiostore product and I had hoped to use some of my smaller NAS disks (WD Red 2 TB) as backup for it. I bought a dock for the disks and am now reformatting the drives.

I am a Mac user and have chosen Mac OS Extended Journal as the new format for the drives. However, I am unsure whether to use the Master Boot record, Apple Partition Map or the GUID partition map as the format scheme.
Could you please advise on what is the best practice? Thanks in anticipation.

The nagging it’s giving you is to back up the Roon database only. Roon does not touch your music files and leaves you to decide best practice to back these up.

In the main settings you need to set up a backup schedule to back up you DB. This can be to a usb stick, external usb disk, Nas,other network location or Dropbox if you have an account.

Mine is backed up to my Qnap nas everynight. I set up a shared folder on the Nas specifically for it. All you need to do then is add the shared path to Roons storage locations. In my case its \simonnas\RoonBackup you may need to add ipaddress instead of friendly name or format like this smb://simonnas/RoonBackup. It all depends on how your system works. I also after this schedule a backup to OneDrive from the Nas. So I have alway two backups a night.

For music files as they are on attached usb disc to my Roon core., I use the hybrid backup sync on my QNAP Nas to mount and access ROCKs SMB share of the music and copy them to Nas then again these get backed up to the cloud. It’s all automatic and I get full notifications if anything fails.

I suggest you read the kB on it not sure if rules allow me to post it here or not. 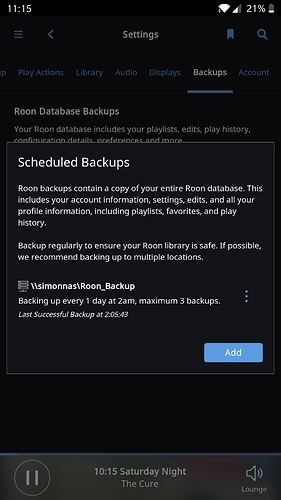 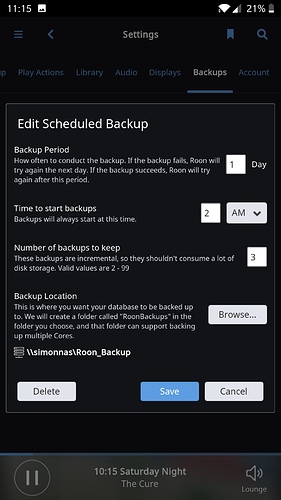 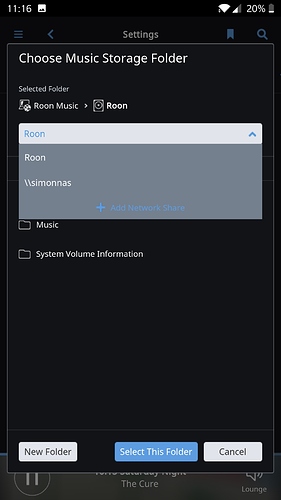 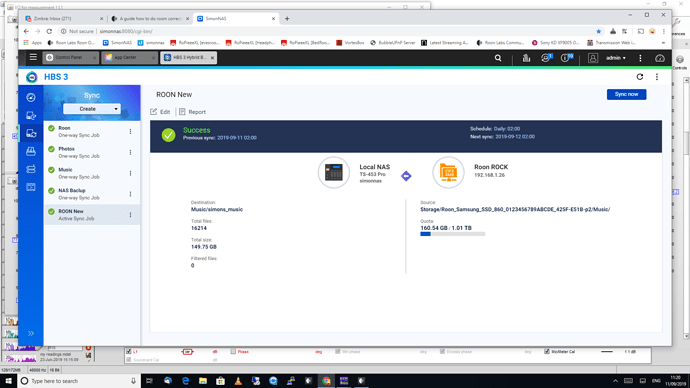 You create an active sync job, this allows you to add an smb mount to your audiostores music storage as I assume it has access to add music to it? 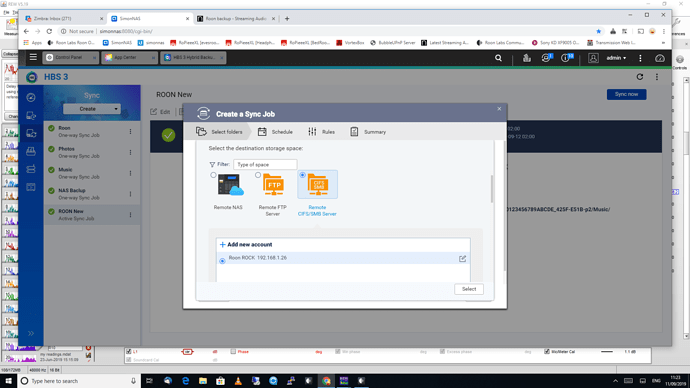 add new account and enter in the credentials and ip address to your audiostore and the shared top level in my case its data. 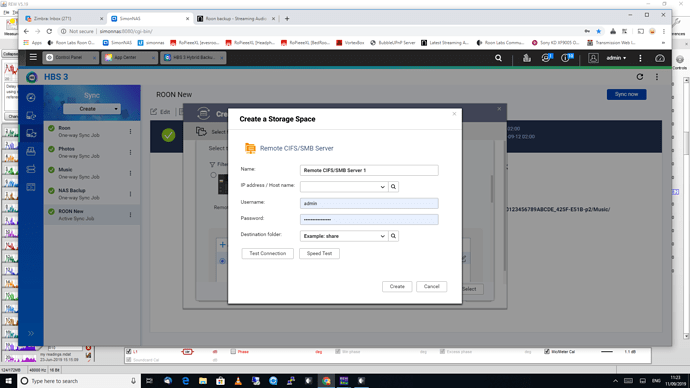 then set schedule and any other parameters.

Excellent advice - thank you.
I now understand what Roon is asking me for … The audio store product has a file location for this, so I have used it. I then backed that up to my spare drive. It was so fast I realised that it could not be the music library backup.
I seem to have difficulty in mapping / mounting my shared folder so thanks again for your example. I will battle away to get it to work.
I’ve not had much luck with Qnap’s hybrid backup in the past (from one Nas to another), but will persevere. In the mean time I’ll copy the library across using Forklift.

There seems to be a bug in the OSX version no matter how many times you click the x it [pops straight back lol.

Odd I have found it pretty foolproof. The new version is much better to use and better laid out though. You need to ensure you only give it ip address, credentials and the top level shared folder it needs to access, you then navigate to the full path in the next step.

I’m that fool.
Good tip about the IP address - thanks

I use a Mac Mini Server (Late 2012) as my Roon Core. It was configured with 2x 256GB SSD drives originally but I replaced one of those with a Samsung EVO 2TB SSD. This is formatted as APFS and is where my music library lives. Roon runs off the other SSD where Mac OS also lives.
I have my Roon Core configured to backup to Dropbox which is also on the 2TB Samsung drive.
The reasoning being if I ever replace the Mac Mini or it fails I can restore the database directly from Dropbox if needed.
It’s been pretty solid since I set it up. I built it from a fresh install of Mac OS and use it almost exclusively for Roon, occasionally for browsing and a few other light tasks.

I had not thought to use Dropbox - I’ll give it a go as I now have space on it. Thanks for the tip.

I use Dropbox for one of my music library backup sites. Dropbox runs on one of my nas boxes, and as soon as I add music to it, it puts a copy in the Dropbox cloud.

I imagine that it would take a few days if I ever had to do a full restore from Dropbox, but that’s ok – its just belts-and-braces backup.

I have my main audio library also backed up to Dropbox, I use it from a number of devices including my laptop. If I add music away from home it’s automatically added to my Roon watch folder and available when I get home.
If you need to sync your Dropbox to a new device, as was the case when I setup the Mac Mini for Roon, it will use LAN sync and as long as source and destination locations are on a wired Ethernet connection, it will do that pretty quickly.

You can use other methods to your own liking, however currently Dropbox is the only backup service integrated in to Roon Core. You can use Google Drive and add it as a backup destination in Roon and use a Scheduled backup. Dropbox integration allows for realtime incremental backups. I can’t imagine it makes a big difference one way or the other really and would come down to cost of the cloud storage mostly. I have a 2TB Dropbox which mirrors most of my audio between various machines including my phone, iPad and laptop.

not cheap though - tidal for roon is £20 then dropbox another £10 a month. Is a back up absolutely necessary?, ok i have a library in roon but nothing i couldn’t re populate with time and i’ve been using roon for 2 yrs now and never had the need to restore form backup

I chose OneDrive as it was cheaper and got office stuff thrown in as well. I also have the free Google drive to back up my phone and photos.

As well as backing all.music to Nas and cloud I also run another to a usb disk on the Nas.

Yes try and use a host name rather than forcing an up address. If your home network is setup right you should be able use host names…and more reliable in the longer run than using fixed up addresses, which is generally considered bad practice. 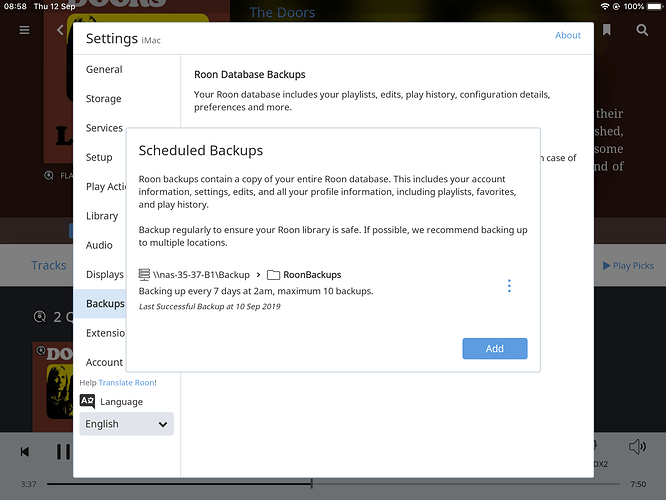 My backup NAS host name is nas-35-37-B1
It’s actual IP address can change and does and my config stays rock solid and I don’t need to worry that my backups haven’t worked.

I wouldn’t use Dropbox unless you are using it for other purposes as well.
I would backup your Roon database to a different platform to one where your Roon server is residing, as it contains your meta data, usage, preferences, your library references, playlists, compilations etc… and over time this get quite tailored to you and your other user profiles who use your system like family members… and would be a blow if it all went… albeit as said above this doesn’t contain media.

No one ever needs anything backed up . . . until they do.

No one ever needs home insurance . . . until they do.

You get to decide for yourself.

I had two drives fail in a ReadyNAS some years back, anything important should be backed up multiple times, in multiple devices and in multiple locations!
All the methods work in a similar way in terms of backups. I use multiple solutions for different purposes, I just happened to have Dropbox and used it already for backup of audio.

Thanks for the comments.
I suspect my network is not optimal and hasn’t been since fibre broadband was introduced. When I renovated the cottage I had Ethernet installed and used Apple Airport Extremes for WiFi. But since going to fibre I haven’t been able to extend ISP to these devices, although they do provide adequate coverage. In my listening room the ISP WiFi works well, but the Apple network is poor. I suspect the Apple devices are nearing the end of their useful lives.

I have a couple of NAS plugged in but communication between them is poor. They have copies of my music library on them, and I have copies on two separate HDDs. My main library is now on an Audiostore device along with the Roon core.

I admit the Apple stuff is getting a bit dated now, but in my experience, it either works, or it doesn’t, and I’ve used mine with several different ISP supplied routers. Did you set them up from scratch, and leave the router as DHCP server?