So changed my router from a Sky hub to the Q version, what should have been a quick swap over became a total powered down also a re position the switch and tidy up the wire spaghetti.

Interesting sound definitely has more attack/air, speed wise i now get 75MB (prior was 50MB), wondering what could be at play here, the better router, bandwidth increase, cleaned my ears:grin: …

In the past i did try cable TLC and isolation for the router - gave no benefit.

I recall Phil mention the Linksys was a good router, but purely as a work horse not sound quality (i think).

I noticed the same with a bt hub upgrade

I noticed a real improvement when I added a switch to my old BT HH3 after it had a meltdown (could’t handle the NAS to NDX traffic) Since then each hub (router) change has not changed SQ; because I have a switch - the NAS to NDX route. Therefore any SQ change can only be with iRadio & my limited web streaming. But as buffer is always full I suspect there is nothing causing anything that effects SQ.

There is nothing at play here. At a stretch I could be lead to believe that online streaming services could sound better, for lan stuff, nah. Sorry.

While we all have started to understand the virtues of switches and more particularly those of the Cisco Catalyst ranges, why aren’t we reflecting more on routers yet? Especially for those or us not switching yet or not willing to switch after all and wanting to improve at the source? Cisco Meraki, Asus, Netgear, Lynksys, TP-link, D-link, specifications?

I guess the question first has to be asked why do you think a router would make a difference?

I have a custom built rack mount pc running untangle, it’s ability to do it’s intended task should be the only consideration rather than voodoo audiophile nonsense*

Further to Gary’s point, it is going to depend on what your broadband router is doing. If you are using its switchports and/or directly connected to your streamer you may, depending on design, hear subtle changes in the audio due to to interframe timing consistency, as well as Ethernet physical clock stability.
This lessens considerably with the new generation streamers.
If you are hearing a difference when streaming over the internet then it can be all of the above plus layer 3 latency in your router. Again this can effect how hard your network stack works in your legacy streamer. A different approach is used in the newer streamers.

Too largely isolate yourself from your router functions, then you can consider a seperate switch with your media server and streamer connected to it… and for internet streaming connect your media proxy server to that switch such as BubbleUPnPServer. Again this is more applicable to the legacy streamers with the older less decoupled architecture.

rather than voodoo audiophile nonsense*

Garyi,…This is certainly not directed at you,.but such comments I consider to be a bit rude,and they also “lace to” the discussion.

In my experience,the most you added in a music-system is important.
If it is then positive or negative is another matter.
But that most affects in some way,is probably no secret,.if you have some experience.

Any differences,.positive or negative,are also heard clearer the more careful you have been with your music-system installation.

I found no benefit, but then i wouldn’t use Sky as a measure of quality routers.
I think everyone situation can be different based on mains and other network “pollution”.

The easiest way is to try.

Not long ago we had similar discussions about switches and now they SWORN BY, I personally found a new Cisco switch was better than an old work horse (but pricey), but overall if rated the Cisco 2960 as a relatively minor improvement (in comparison to other tweaks).

I found a quality mains cable twisted not shielded on the Cisco 2960 (i tried a Powerline and Supra) was a far greater improvement, put in a certain plug fuse (just a lowly black SR and WOW.

Peder you seem to find opinions that differ to yours to be rude.

There is not a lot I can do about that. What I can say is I love tinkering with networks I feel it’s a vocation I missed out on. Consequently I have had tonnes of switches, commercial routers, hand built routers, whole home solutions.

You name it I have had it. I am now slowly moving the network to ubiquiti.

What I can say through all of this, over many years, is it made no differences what so ever to music replay. That’s my opinion and as long as I am not banned I’ll express my opinion on such matters when the threads come up.

You are welcome to ignore me.

I tend to ignore him as i find the same.

I found no benefit, but then i wouldn’t use Sky as a measure of quality routers.
I think everyone situation can be different based on mains and other network “pollution”.

What do we mean by ‘quality’ router… A router is about connecting two networks together such as your home network to the public internet.
Many home ‘routers’ are far more than providing a routing function, they can provide Wi-fi, dhcp, firewall and switching functions…and many more things… they are essentially mini computers. However in local streaming SQ it’s the streamer connecting switchports where are focus lie.

The Cisco 2960 switch SQ benefit that I introduced to this forum several years back was discovered by accident by chasing down common mode RFI on Ethernet leads… So if you are using a home router’s switch ports to connect to your streamer, then that will interact with a directly connected streamer just like a standalone switch will. Different switchport devices may sound subtly different whether they be on a standalone switch or a home broadband ‘router’… but for local streaming it is the switchport that matters not a routing function. Routing is clearly irrelevant if streaming within a single subnet, ie home network.

Forgive my ignorance on these matters, but regarding the Cisco 2960 switch that Obsydian & Simon-in-Suffolk are referring to. New switches appear to be expensive. There are a number of second hand switches like this one https://is.gd/YqWxLh on Ebay and some on Amazon that are the same model mentioned for very low prices. I see they are rack mounted and presumably quite big, but are they going to be any good or even suitable??

The popularity of these switches arose largely due to their ready availability at low prices on ebay, so one of the older blue models would be fine. They are a little larger than an unmanaged switch, but the 8 port models aren’t too large, and are silent, unlike the larger versions which are fan cooled.

The popularity of these switches arose largely due to their ready availability at low prices on ebay, so one of the older blue models would be fine. They are a little larger than an unmanaged switch, but the 8 port models aren’t too large, and are silent, unlike the larger versions which are fan cooled.

Thanks Chris, There seems to be an abundance of 24 port models and over at very cheap prices but I haven’t seen an 8 port for a similar price yet. A shame.

To add my new vs old was related to the old blue 8 port.

My quality point was back to the old forum thread relating to the Linxsys.

Following a rather lengthy ND555 thread and breakouts, it seems even more sensitive.

Chris (or anyone else who know more than I do about any of this) Would this one fit the bill? 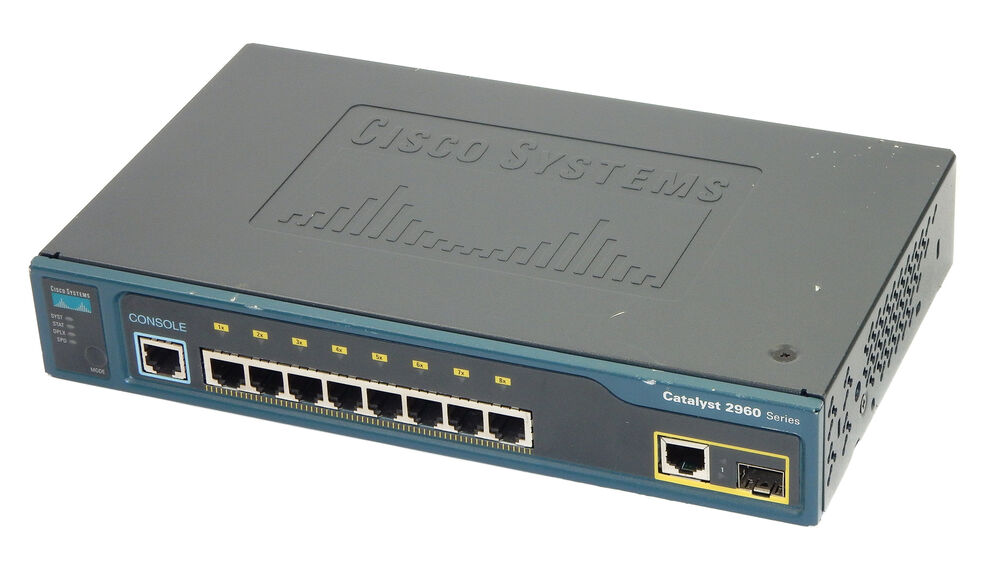 WS-C2960-8TC-L V01. Part Number - WS-C2960-8TC-L V01. Used Item, May bear Marks/ Scratches And/ or Discoloration. What is pictured is generally what you will receive. While we endeavour to use pictures of the actual item, this is not always possible...

Edit: Quickly reading about this, I see that it appears to require configuration / setting up etc. I think I may be a bit out of my depth with this…