I do have a Sony XBP700 but it’s connected to my Nova via coax, and that simply reads/outputs the CD layer, as far as I can see/hear.

I’ve had a few SACD players in the past (Marantz, Oppo, Arcam) but they’ve since moved on.

Disregarding the debate about whether I need one - nearly all my current listening is split between streaming from my Zenith or playing vinyl - which decent SACD spinner would anyone care to recommend. Budget is £500ish, for s/hand, most likely.

I have a pioneer dv656a, sounds pretty good and was highly rated at its launch. You may be able to find a s/h unit.

Yes, I have a Pioneer UDP and it won’t allow a digital out , spent a long time discovering that…

Yes, the Sony UHD players are really good for visuals but for SACD it doesn’t work in my set up. The digital out to the Nova reads or plays the CD layer only.

Then there’s various Denon and Marantz within my s/h budget too.

Yes, that’s the issue: my Sony UHD only has digital outs.

I would have a look at the on screen menu from your Sony player , and see what that can offer .

Why do say that Arcam have ‘moved on’? They still offer the CDS50 which plays SACD natively. It is essentially the same as the earlier CDS27 ( which I own ) but with a 32-bit ESS DAC replacing the 24-bit Burr-Brown chip. The streamer in my CDS27 is a throw-in with a basic specification that can play music from a local UPNP Server but not from Internet-based services. Maybe that aspect is improved in the CDS50? I can tell you that SACD sounds wonderful on the CDS27 which only cost me £500 from Richer Sounds; what a bargain!

McIntosh also have a range of SACD/CD players and I have been gazing lustfully at the photos on their website recently.

A quick glance at a well known chain’s website shows the Arcam at £750 with SACD and Reavon at £699.

If it was me, I would go for the Arcam

Thanks Ian, yes I’ve scrutinised the Sony’s menu options and it’s not possible, from what my meagre tech skills can work out, to play SACD natively to my Nova.

My friend routes his Sony UHD player via HDMI to an AVR and that does play SACD, apparently.
My Nova’s HDMI won’t read the higher resolution layer of the SACD, though.

I can tell you that SACD sounds wonderful on the CDS27 which only cost me £500 from Richer Sounds; what a bargain!

That does sound like a good option, either the older or more recent Arcam.
Thanks.

Why do say that Arcam have ‘moved on’?

Sorry, I meant in the vernacular sense, that the players themselves have moved on from my set up, (ie) sold on.

I use a Denon DVD-2900, which has analog outs. The only problems I have had was the CD/DVD drawer sticking about 8 years ago. Replaced a belt, and all is like new now. I used to have a big surround setup with all Paradigm speakers for 5.1 SACD surround discs. This really upped the game as far as sound went, back in the early 2,000’s.
I wish the format would of took off, but ultimately never did.
I also have a newer Marantz blueray player that plays SACD’s/DVD audio’s, but no analog outputs on that one. It uses HDMI and optical. 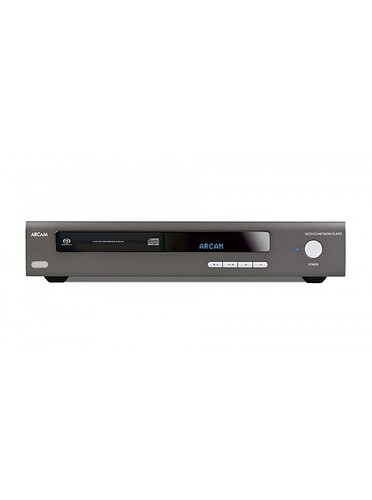 I was very tempted by both the older and newer Arcam players, but I’ve just bought a s/h Denon 1600NE, (not quite within my budget of £500) which I’m collecting this morning.

I’ll see how it works out!

I just googled Denon 1600NE and an integrated amp came up. Are you sure you bought an SACD player?

I just googled Denon 1600NE and an integrated amp came up. Are you sure you bought an SACD player?

I picked it up this morning - turns out it’s from a fellow forumite! - and it’s currently warming up nicely.

Long story but in short, the player might well be heading to my brother’s set up, as he’s also sharing the load of SACD discs I’ve recently acquired.

That said, I’ll still need a player with analogue outs, so it gives me a chance to gauge its performance against future possible alternatives.

I’ve got the Sony UBP-X800M2 - it outputs digitally into my AVR and sounds great, especially with SACD.

Sorry it’s not an answer to the OP’s question, but you were discussing it…