I see that Samsung are the latest company to stop manufacture of BluRay players (reference).

Similar reasons given to Oppo’s one of decreased disc sales and dominance of movie streaming.

Is streaming the ‘end state’, or is there still a future for ownership of films?

Although I’ve become a bit of a streaming fan recently, it’s more to do with the cost of the films than convenience. Sure, the quality of the 4K Apple iTunes material is excellent, but neither sound nor vision is as good as a well-mastered disc.

I reckon the disc medium, as with CDs, will continue for a few years yet, with players being produced by the more specialised companies, and the likes of Panasonic, who seem committed to making the higher-end players. like CDs, many folk have extensive collections of physical media that they’ll want to play.

For me at least, ownership is quite a different question for video than for music - with music I want to keep coming back and playing, and I wouldn’t want the risk of that ever stopping so ‘ownership’ is the only answer. With films it is very much a rarity that I actively want to watch again, though over time I am happy to with many - but generally years between, so streaming is acceptable, provided the cost is acceptable. I subscribe to Netflix, on the basis of several people having access (subject to a max of 3 concurrent). But I have never had any inclination to subscribe to Sky or any other such provider, the costs being way too high in my view.

Are we all being forced to go 4K?

I am not sure I am read yet, too many differing opinions here,

4K - Worth it? Home Theatre

Going back in time I remember the switch from SD to HD, that is from video to DVD; and, I was a very early adopter. I bought a nice expensive Denon player, that died a year and a day after purchase. This new format went hand in hand with higher resolution screens, rendering (sic) my videos as soft focus, as well as demonstrating the superior sound available via DVD. In due course I replaced all my videos with DVDs and then ripped them to my SAN for backup and resilience. The came BluRay. Blu…

I get that. While I watch films more than once when and as streamed or broadcast over the years, I very rarely play a DVD/blu-ray disc more than once (the exception being kids movies when they were younger).

So in pound value terms I always felt they were less worthwhile than records and CDs, which invariably received multiple plays.

Netflix and streaming movies is all very well, but the selection of movies on Netflix is dire.

And it will only get worse when Disney’s service starts up later this year as they loose the largest portion of their movie library.

Personally not bought a disc in about 6-7 years got rid of the bluray 3 years ago not that ever had many to start with.

Personally, streaming any kind of hi def content around here is nigh on impossible. It might work for a little while, but soon you notice resolution lowering, lowering, until all you see are smudges on the screen and then the inevitable freeze and the wheel of death appears. The chances of getting high speed internet? In the words of the last lot of Openreach engineers who decamped here following damage to overhead cables last year, “no chance”. So, if we want to watch films at home, streaming any sort of content is just not possible. And I’d imagine we are far from alone in this. Thankfully Cinema Paradiso is heaven sent to fulfil our needs. Not only do we receive physical discs, either DVD or Blu-ray, but the selection is far wider than any legal online resource that I’m aware of. So I certainly hope that physical media continues to be made available, and of course, the players to play the discs also remain available too. Oh, and I just bought a spare Oppo blu-ray player, just in case…

I use a 4K Bluray and also stream 4K. Picture quality seems close for 4K content, though HDR is noticeably better on a 4K Bluray. Sound is another matter, Blu-ray is much better. A well recorded concert Bluray on a high end player on an large 4K OLED through a Naim is a real treat.

That is quite depressing.

I think this may be oldish news, but apparently Cambridge aren’t making their CXUHD 4K player any more.

We’ve relied on £10 Blu-rays from supermarkets so far but the selection just gets worse. I’ll have to give that Cinema Paradiso a try.

Interesting @Count.d. Wasn’t aware of that, however also just seen on Cambridge Audio’s website that it’s listed as ‘archived’ and no longer current.

It fits the trend though, and reflects a definite move away from physical media for films towards streaming.

Given falling sales of discs, it’s remarkably ‘bullish’ of the studios to still charge full price for new releases (BluRays at £15, 3D BluRays at £18 and 4K at £25+)!

Will be interesting to see where this trend ends up, and whether other disc player manufacturers will also drop out. I think @Richard.Dane’s decision to buy a spare high quality BluRay player now is very wise (especially if folks have a big film collection and no desire to store them on a personal NAS).

In years to come, we may be looking back fondly at BluRay players in the same nostalgic way that folks look back on Nakamichi cassette desks or Revox R2R!

Gosh, I just got one of those a few months ago and it’s a fine piece of kit with great sound quality.

Have a look again…shows as archived (discontinued)… everything else on the page has a price except Cambridge’s CXUHD 4K player.

I was going to show screen shot, however probably breaks forum rules, so haven’t. 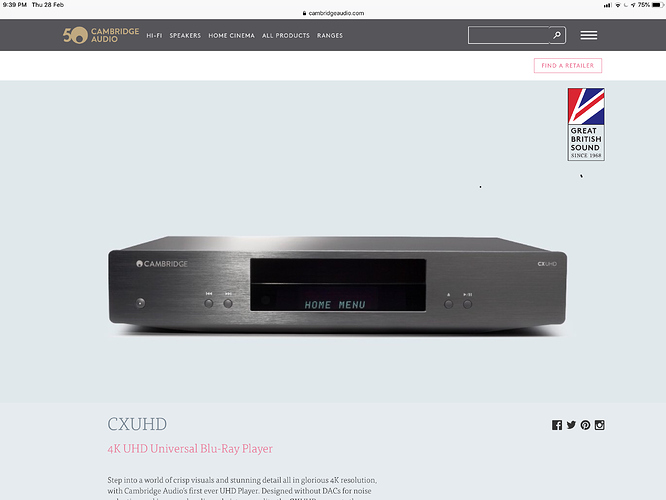 That’s what I see?

That’s what I see? 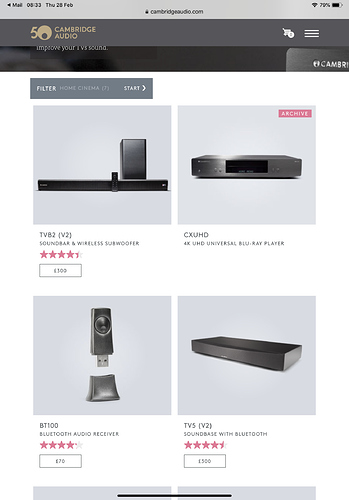 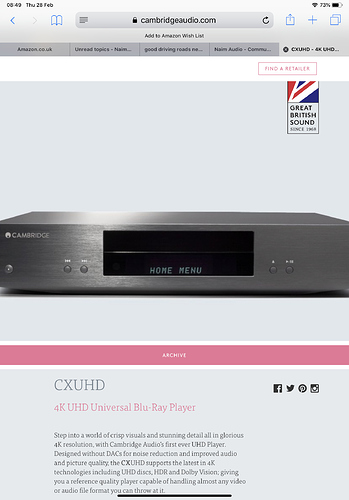 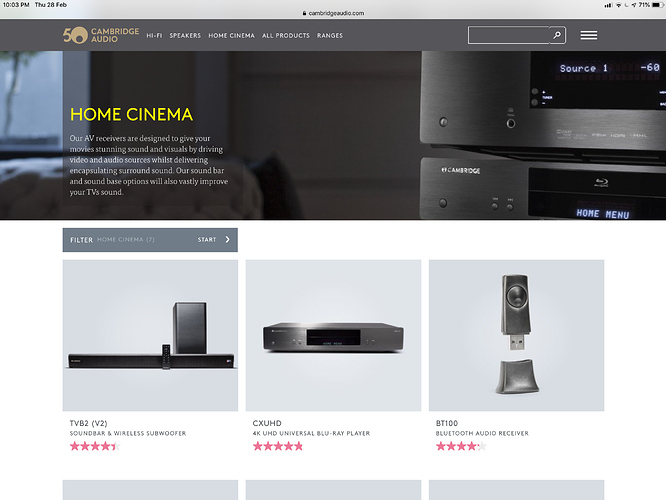 Also confirmed on several forums, e.g. Reddit; “So whilst shopping for new speakers my hifi dealer told me that Cambridge Audio is no longer selling the CXUHD player. This 4k Blu-ray player was the alternative for the Oppo 203. Apparently the inner mechanisms aren’t being produced anymore and they have to halt production“.