Well…you probably all know this but Naim have discontinued the Mk 2 drivers altogether. I’m kicking myself that I didn’t order one earlier. Did get Falcon Acoustics to see if they could replicate the driver but without the enclsure they said it was impossible. I’m loathe to give up these excellent speakers. Anyone else managed to find alternative drivers?..Wouldn’t it be nice if Naim actually passed on the specs to a company like Falcon?

Naim kept spare driver sets for many years after the SBL and SL2 were discontinued, but without the facility to make more, once their stock was exhausted, that was that.

Your best bet now is to look for good drivers to salvage from poor condition boxes - either SBL , Allae or Credo.

ok thanks for that…but my question remains…They didn’t actually manufacture the drivers did they? They just modified them surely.
just a heads up to another company that could easily produce them would great wouldn’t it?

The mid bass drivers were Naim’s own, hand built in the factory from the ground up.

Ah ok. That explains it. Thanks. So I have a Mk1 driver (the other blew after a fault with my 250 amp) and a Mk2 obviously Mk 2 is an improvement…so i’m stumped. Really don’t want to purchase another pair of speakers just to cannibalise the drivers…Maybe it’s time to look at some other options. Thanks again. Felix

It would likely be cheaper to cannibalise an old pair of Credos or SBLs, either of which can be found for under £300 with a little patience, than it would be to buy a new replacement set of drivers (if Naim still had some).

Did get Falcon Acoustics to see if they could replicate the driver but without the enclsure they said it was impossible.

Not sure I understand this…? Surely it is always possible to re-make a driver - either from a failed one, or from new - given enough £’s…?

I understood that Falcon Acoustics and Wilmslow Audio can ‘re-make’ or repair most drivers…?

This is what Jerry from falcon acoustics said

Felix, hi. We’ve measured the unit free-air which is measuring so badly with
a big +8dB peak at 700Hz that it’s difficult to know what to suggest.

My suggestion would normally be to measure it on a standard IEC baffle, but
we don’t have time for that at present.

So quite some time has passed and I could maybe try again but it seemed pretty hopeless to be honest.

OK, that makes sense, from Falcon. This was measuring the broken unit…?

Maybe try Wilmslow, then…? Let them see a ‘good’ unit…?

If someone can solve this, other SBL owners should be pleased…

No no. This was measuring the good working unit.

If you have a Mk1 (Mordaunt-Short) driver in one cabinet and a Mk2 (Naim) in the other then you should definitely try to have both drivers matched, i.e. both Mk2s, as these are markedly superior to the Mk1s.

Yes of course you are absolutely right ….

There are quite a few videos on YouTube, showing how speaker drivers can be repaired.

The slight problem might be…… that in despair I may have recycled the driver.

Surely it is always possible to re-make a driver - either from a failed one, or from new - given enough £’s…?

I suspect it depends how big the prospective market is. It’s big enough to support assorted BBC licenced models where the original drivers are no longer available - for example Volt build the mid/bass for the Graham LS5/9 - but how many people would be willing to stump up for replacement SBL drivers if complete speakers are available for £300?

Yes, agreed. But - in most cases, its not a ‘new’ driver that actually needed - but a faulty or failed one which needs repair.

Given the degree to which units can be repaired - based on You Tube (yes, not definitive but…) - I feel that more is possible.

Yes but one has absolutely no idea the state of the drivers in the secondhand sbls. Let alone whether any of them have the mark 2 drivers!

The later Naim-built drivers can be easily distinguished from the earlier Mordaunt-Short units by the basket surround. The M-S drivers used a pressed steel basket with curved edges and a thin lip. The Naim drivers used a cast alloy basket with a flat outer face and with two of the four sides being straight edged (there are other differences under the skin too, such as the phase plug being used as a heat sink for the coil on the Naim unit)

This image from the 'net (courtesy of Springair) shows the later Naim mid/bass drive unit; 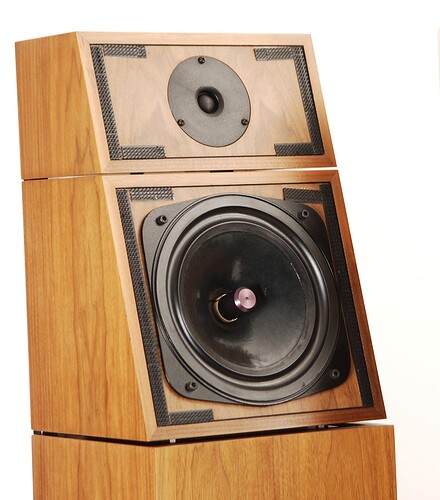 It depends what needs repair too. If the voice coil is fried, or the former distorted by heat, it becomes much harder. Replacing the surround you’d have to source the right dimensions and material so it terminates properly. You may get a functional driver, but it might not match Naim’s specifications.

But you’re right - it’s an electromechanical assembly, so given enough time and skill it should be doable…