I had in another post mentioned abt my struggle on to upgrade my current sopra 2. I am torn between Scala Evo vs Magico M2.

I search thru google n found no such comparison. Anyone any feedback?

PS: i had demo the scala in my home but magico no such opportunity at my country.

@Thomas can give advice on Magico.

I have the same boxes as you unDRed (552/500) with Sopra 2s. The breakthrough for me was the MusicWorks Ultra G3 with sparkly bottom (long thread on it from many here). The system is really singing for me now. Mains power is often neglected - dedicated radial very important.

I also found the Innuos Zenith with Audiophilleo +PurePower usb to spdif into nDAC was part of the solution. I do also have full Superlumina. Room treatment helps others but soft furnishings in a 6.4 x 4-5m lounge work for me. Racks and box spacing positions also. Lots on the forum.

Although at times I have wondered about better speakers (Kudos Titan 808 are liked here) I find the Sopras highly dynamic now. I recommend getting the most with other tweaks first as you can’t recover what has been removed although you can rebalance more to your liking.

Hi, I think maybe the Magico S-range is the closest competitor to Focal Utopia (at least from a price perspective). Have read that some consider the M2 a bit difficult load compared to S3, S5 or even M3s. How much there is to this with a 500dr I don’t know? But something to be aware of…
I have S1s, and this I know, they are very neutral and high resolving speakers, and to benefit from this type of speaker I think that you need to be able to allow for optimal placement in your room. I suspect that both the Focal and M2s fall into this category as well and if room placement is reasonably flexible I don’t see why you would not be happy with either of these speakers.

If I recall correctly, a few months ago you posted some questions about both Magico’s M2 and Scala Utopia Evo as well. Still wondering which one the choose I guess

Both Focal Utopia and Magicos are well designed speakers.
Both highly resolving.
And both very different from ProAc and alike.

If you like the Focal Utopia range, you’ll enjoy the Magicos even more.

Compared to other brands, most of them in fact, I’d say Magico has a more engineered design resulting in an outstandingly low noise floor. 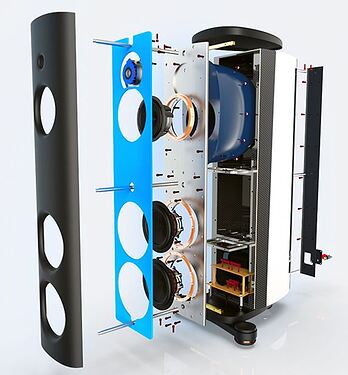 Both Magico S and M ranges are capable of providing the smallest details and still being extremely musical (I’m saying “musical”, but I have no idea what it means

What I mean is that you get all the details in a pleasant and flowing way. No hearing fatigue whatsoever!

As for comparing the Scala Utopia to the Magico M2, I’d say the M2 is better.

The Scala is more in the S range, I even would venture to say the S3 MkII performs better.

Still, be aware that the M2 aren’t an easy load. Which means you won’t be able to fill a gigantic room. But in a medium room 30-40 sqm, you’ll be able to enjoy a Mahler’s symphony at… symphony levels !

EDIT : The S3 MkII and S5 MkII are, I believe, options to consider too.

HiFi Critic about the Magico M2 :

"It is abundantly clear that the M2 is a decidedly
close approach to the state of the art, irrespective
of size or price. On many occasions I was strongly
reminded of the fabled midrange naturalness and
micro detail of the Quad electrostatic. With the
review audio system fully optimised the noise floor
was exceedingly low, the rendition of fine detail was
truly exceptional, this combined with frankly jaw
dropping stereo image focus, width and depth.

Myriad tracks and entire works sounded as if
they had been remastered and there was no need
for the system to be played any louder to hear all
of that. Somehow the designers have conjured
up an engineering recipe where the witness of the
design and technologies employed is no longer
identifiable, and created magic electroacoustic
devices which simply disappear into the entire
soundstage illusion."

Thx Thomas for such detailed explaination.

U caught me! Indeed in a separate post i did ask similar question n still torn between the French n the American product…

In fact w limited budget, i was also wondering shld i go for dCs rossini and clock first.

Hi Joppe, i had a relatively small room n thats y i find the scala abit imposing. But had testesd in my room n was great, but cant go high volume as it will start to pitch my ear.

Hi
Looking at the core and n dac you are using right now, you will certainly get a massive uplift in performance if you go for the rossini and clock, £60k plus speakers in your system right now, doesn’t look like a great balanced system

I would upgrade the source first, as some pointed above. Be it Nd555, Rossini or Capellini.

Thx Thomas for such detailed explaination.

In fact w limited budget, i was also wondering shld i go for dCs rossini and clock firs

Changing speakers will bring you both “different” and “much better”, which is nice!

This is especially true when changing for speakers as good as Focal Utopias or Magicos S or M.

Whatever you choose, Focal or Magico, the gap will be huge.

Your nDAC+555PS-DR is a very nice source. I had that combo.

So source of speakers first? (that one has been discussed ad nauseam…)

Considering your fine source, I’d go for the speakers first, especially if the speakers are Magico M2 (and if you can have them new at an interesting price).

System balance is something obvious, but when it comes to changes I tend now to prioritize as follows :

Have fun with your new toys, whatever toy you choose first

To elaborate a bit more on my other post.
I guess you are looking for more detail, wider sound, more open ? If so then i think looking at your digital side, this will bring more and certainly get the best out of the speakers and amps you have now, as i see the ndac and 555dr your week link, especially if you are looking for the above improvements in sound.

Hi Dunc, thx for ur advice. But i was also told that i might not get much uplift if i were to feed the DAC (even if i upgrade to rossini) from a core (due to the core output, not very sure wat it meant from member in dcs forum).

Dont know sorry, but obviously the rossini has a great streamer board built in, that i found to be very good and i use that mostly.
I also have a melco N10, with all my rips and downloads on, that feeds into the rossini using ethernet.
I guess you need to try and see, but for sure the dCS will be very different to the ndac

Get the Magico’s first. That way you can hear how your other changes work out

Other solution : sell the Ndac and get an Nd555. The Core will be connected in Ethernet to a switch. You would have a huge uplift for around 10k, as you have already the 555 ps.

The user has stated on the dCS forum, that he has tried the nd555 and didnt feel it was much of an improvement over the ndac, that’s why i guess he is looking at the rossini/clock.
Funny as i felt the same when i compared it against my nds, £10k ish to change and not feel like much has changed, probably not the best way for him to go i feel, as it looks like to me he is after a sound the naim dacs just cant give

Good though the nDAC is, the ND555 is generally felt to be better by a margin. If the OP doesn’t feel this I’d be asking why and whether the ND555 listen was in some way sub-optimal. I’m not saying he should go for the ND555 but more that if he is dismissing it based on it being no better than the nDAC something isn’t right somewhere…

I certainly found a massive difference between the NDS and ND555. I would never have swapped my CD555 for the NDS but the ND555 was a very different matter.

I know what you are both saying, and i am just saying what he said.
But not everyone feels that its a massive difference, plus everyone has a different feeling to what massive is, i for also felt the nd555 wasn’t a big enough improvement for the price difference, and certainly not a massive difference, more a slight improvement.
Maybe i was expecting far to much from it and was disappointed when i didn’t get what i was expecting, as i had read all about it and had very high expectations for it, and it just didnt deliver.
Plus i also when i had the nd555 at home on demo, and couldn’t really tell much difference, got the “it must be a bad nd555 quote”, well i took it and my nds back to hifi lounge, where we got them both connected up and tried them, the out come was the nds was fine, the nd555 was fine, the difference not much.

And did some back and forth with the two. In my own system.
This is something very interesting to do

I don’t know how to put this… the difference is huge!

Especially when going back to the nDAC.

Even if, at the time, I had very different speakers, not as resolving as the ones I have now, I could still hear the massive differences in terms of clarity, airiness, etc.

But I have to admit that, prior firmware 3.4, the ND555 didn’t completely fulfill my expectations. And I can understand that some ND555 users drifted towards other brands. I was really close to do the same.

Later, adding a second 555PS-DR brought even more of that airiness, details and micro dynamics I enjoy so much when listening to classical music.