Does anyone know of a script that will extract metadata from a meta.naim file - including my edits made via the naim app - and create a metadata file that can be read by most other music servers? The goal is to allow my naim-ripped .WAV collection contents to be visible and organized on a non-naim server.

Do you have a meta.naim file you can share?
If yes, pls send via “fromsmash” and paste the link here. Thanks

I don’t know what a meta naim file is but MP3TAG can extract artist/album etc from the track name and create metadata from it, giving other apps sufficient info to work from. Good if your naim device went tits up and you want to keep your rips.

The best bet remains to convert the wav to flac before your naim kit goes tits up.

As said above, you must first convert the unique to Naim formatted WAV files to FLAC on your Naim ripper.
Then you can convert those FLAC files back to the standard WAV file format using one of the metadata editing packages.
I use dBpoweramp to convert file codec.

I would like to think the meta.naim file is at least readable and something can be extracted from it. Today it would be in json format or something immediately reusable. If anything can be extracted from it, then the data could be reapplied to new flac files. Assuming there was a wav_filename,tag,tag,tag,tag…. structure.
The dot naim naming convention reads like it might be proprietary.

Yes, meta.naim content is clearly readable and well structured. FYI I attach screenshots of a rip that the Core failed to identify, and a bit of the associated meta.naim file that contains my manual edits for the album title, artist, and track names. The manually added artwork appears as a file called “userartwork.jpg”. It’s that info that I’d like to see extracted into whatever the conventional metadata file is for WAV. 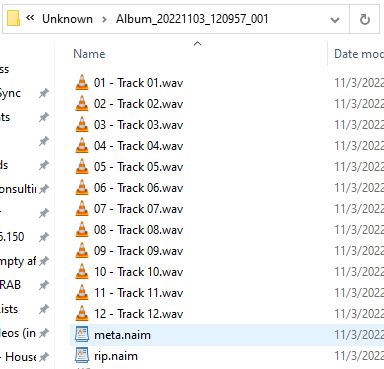 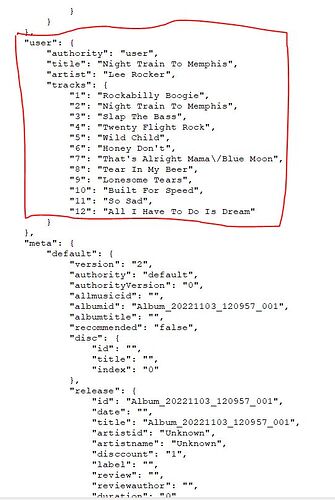 MP3Tag is able to tag albums in WAV format, but MP3Tag gets its info from external sources, not from the existing meta.naim file, so that would require manual tagging of all the albums. I want to automate that, and I was hoping someone has already made a tool for it. If not, I might see if one can be made.

Also, I do not want to convert to FLAC due to audio quality loss. On well recorded material, I can hear a significant difference between FLAC and WAV.

If you use a server that can transcode FLAC to WAV on the fly you can store your files as FLAC and still feed WAV to your streamer. The 1st gen Naim servers, Minimserver and Asset can all do this. Your profile says you have a QNAP, so you could run a server on that.

Sadly this is one of a number of features that was removed from the Core even though the previous range of Naim servers could do it.

Sadly this is one of a number of features that was removed from the Core even though the previous range of Naim servers could do it.

Just to add to this, the transcoding feature was apparently judged by the developers as unnecessary for UnitiCore because 1) the new platform streamers decode flac well enough that flac files are indistinguishable from Wav (which seems to be true) and 2) with storage so cheap, why would anyone want flac anyway (which ignores Naim legacy streamers and that downloads are sold as flac not Wav usually)?

On a discussion meeting at a factory visit pre-covid I said the Core needed some development and mentioned flac to Wav transcoding on the fly. The senior Naim software guy there said disbelievingly “Is that your opinion or do others agree with you?”

Just saying. I forget whether you were at that visit…

Just to add to this, the transcoding feature was apparently judged by the developers as unnecessary for UnitiCore because 1) the new platform streamers decode flac well enough that flac files are indistinguishable from Wav (which seems to be true) and 2) with storage so cheap, why would anyone want flac anyway (which ignores Naim legacy streamers and that downloads are sold as flac not Wav usually)?

I can see their logic in this for transcoding, but not for metadata conversion. I’m no expert in data compression, but it seems to me that information lost in the compression process cannot be recovered no matter how good your decompression process is. In other words, a highly compressed FLAC file will always sound inferior to a lightly compressed FLAC file. I imagine that Naim has high quality (light) FLAC compression in the UnitiCore, and therefore Naim-ripped FLAC files may well indeed sound as good as WAV. But that won’t necessarily be true of all FLAC files you find. For example, Tidal (FLAC) sounds significantly inferior to Naim WAV to my ears. I wish I had been able to compare the Naim FLAC to Naim WAV before ripping my entire CD library - had I chosen FLAC, on the basis that it truly was indistinguishable from WAV, I might have saved myself a lot of effort in trying to fix the metadata issue after the fact.

The significant flaw in your argument is that FLAC is always lossless. The degree of compression only affects the amount of processing needed to process it.

If you had a new platform streamer, Nova, NDX2, whatever, you wouldn’t notice these differences. But on a 272, many people have commented that Wav sounds better than flac.

Does anyone see utility in a tool that would extract meta.naim file content into a WAV metadata file that could be read by other media servers? If so, I might look into building one. I would think that if such a tool existed, this group absolutely would know about it but it has not yet been mentioned.

I think that no such tool exists, in public anyway. And I think there would be significant interest in it.

Yes, David, that’s exactly what I thought until a couple of days ago but now I’m not so sure. I need to look deeper into it as a matter of personal interest. But as for my FLAC vs WAV decision to rip my collection, that ship has sailed - I’ve already gone down the WAV path and now I’m trying to make my collection content visible on other servers (It plays fine.) without too much effort. I really appreciate the experience in this esteemed group!

Believe me, FLAC is lossless. End of.

If you had a new platform streamer, Nova, NDX2, whatever, you wouldn’t notice these differences. But on a 272, many people have commented that Wav sounds better than flac.

On Ubuntu there are free utilities to update metadata tags on FLAC files. There are also utilities like ffmpeg which will quickly convert WAV to level 5 compressed FLAC, files which will sound indistinguishable to WAV on any modern streamer as covered above.

If you’re at all technical a shell script to convert your WAV to FLAC and then embed the correct metadata from the naim file would be easy. Could likely be done on Windows too.

Or you could simply convert everything to FLAC then point a tool such as MusicBrainz Picard at the files - this will offer metadata from public databases and it is pretty complete and accurate.

p.s. the reason for a move to FLAC is that these have proper metadata support. WAV files don’t.

the reason for a move to FLAC is that these have proper metadata support. WAV files don’t.

As far as I can tell that is a limitation of WAV files that are created on Naim rippers. The vast majority of the 2,500 or so albums on my NASes are ripped to WAV, with fully embedded ID3 metadata tags. These are readable by control apps.
Also converting WAV to FLAC on a HDX takes the non-standard Naim format metadata and correctly tags the FLAC files. If these are then converted to WAV using dbPowerAmp I’m pretty sure the tags are embedded in the WAV files,

David, you are right. I just ripped the same high quality CD on the Core as both a WAV and FLAC then played them back through the Core. Absolutely zero difference that I could discern, and both sounded terrific.

You are of course correct that tagging WAV using ID3 extension chunks is possible, I could have used better wording. WAV files support limited metadata perhaps.

ID3 tagging allows a fixed list of tag names to be used. FLAC files (and many others) use VORBIS comments where ANY tag name can be used. If you want more than a basic track title you’ll be better served in the long run using FLAC and capturing all available metadata from somewhere like MusicBrainz - which can be done in bulk using free tools.

If you really must send WAV to a device simply transcode via Asset or whatever server you use as anything modern has transcoding built in.

FLAC is lossless but not inaudible. But converting back to WAV should restore that. You can always try using Flac -uncompressed.

meta.naim is an XML file and it is easy to parse with javascript (Node.js) which also has the tools to write normal tags. Almost any language has tools to read XML.

SongKong for Melco can do this. But only on a Melco I think.

I had a Core for a while and was irritated Naim kept this practice but I realized it probably sounds better (less metadata to skip, less processing).