There has been a lot of comments on a particular thread , which seems to have been perverted to show us your boots .

Many concerning R M Williams , I may just have the tattiest pair of R M’s in existence .

Once they have been cleared by Porton Down I will show them . They may need government clearance under the official secrets act

For those that don’t know, R M Williams boots come from the land down under and they are national icons . The key thing is that they are made from one continuous bit of leather , they are bu**ers to break in , but once worn they fit to your foot like a glove . Some pairs are dress and others are designed for stock yard workers. The nearest we have are Doc Martens

I have two pairs of RMs , one so swish I would wear to meet the queen and one pair Wurzel Gummidge would decline wear

I’ve never owned a pair, but I fancy these:
Yearling boots in black.
Width will be all important, so I guess I’ll have to go to the New Bond St or Berwick St shops and try em on. 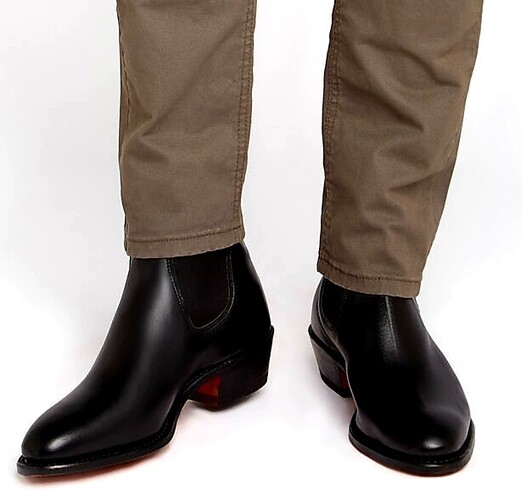 Nice! So a few of us have heard the RM Williams boots.

I own 2 pairs of RM Williams boots, one tan, one black, and I love them, much more the Church shoes.

PS: It’s a bit late here, I will take some photos of my RM William boots tomorrow.

Smart. Unfortunately I have hobbit feet and they’d be like wearing a vice.

Yeah, that’s what I’m afraid of… they only come in a G standard width…but I’m hoping that’s more generous than my Jeffery Wests.

I’m a boot man when more formal footwear is appropriate, otherwise casual walking shoes (often incorrectly generically called trainers). I hadn’t heard of RMs, and the notion of breaking in over a long time is anathema to me - my wide bony feet suffer enough with far more accommodating footwear! I don’t like Chelsea boots because of that expanse of elastic at the side - I prefer my ankle boots with a side zip.

As for colour, I haven’t worn black or brown boots since leaving school - and that includes with formal suit, DJ etc. Off-white (true cream) has long been my trademark, otherwise maroon, green, grey or taupe. Normally plain smooth leather, but favourite was python in natural (creamish). My python boots were very hard-wearing, not scuffing or scratching like leather, just darkening slightly with age so looking good for many years of regular wear.

My foot shape means comfortable footwear is a rarity off-the-shelf - but my most recent discovery, doing me for my final 5 working years, was a pair of women’s boots by Pavers! In a discount shoe shop browsing unhopefully for anything of possible interest I passed the women’s racks and an ankle boot caught my eye - nice clean lines, and unusual taupe colour. passing again after seeing nothing interesting in the men’s section I picked it up - and saw it was size 9, extra wide fit. I tried it, and it fitted like a glove! I bought it. And found these boots the most comfortable footwear I’ve ever worn, better even than made-to-measure I’d had in the past, and inexpensive to boot (!). I loved the colour with dark grey or black suit. The boots were so good I bought some in another colour by mail order so I have nice footwear for many years to come!

Standard fitting for most shoes is, I think, an E. That’s too narrow for me - I favour an F or a better yet, a G. The RM Williams boots are spot on for me and comfortable from the start. 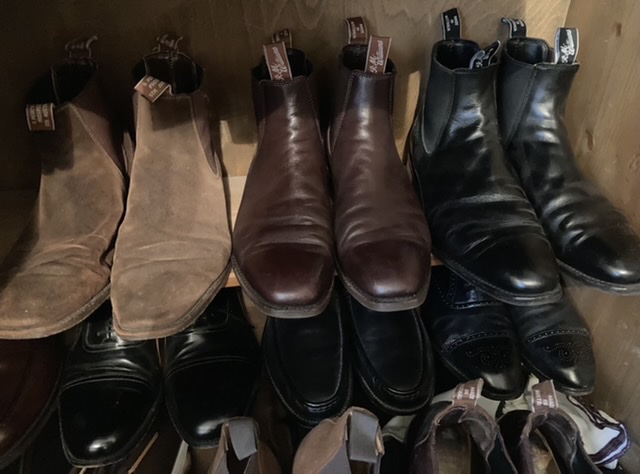 The suede ones I found easiest to “break in” , I will post my two pairs this afternoon .

It was wide fitting options that first attracted me. Only boots ever owned that are comfortable for long periods. G fit best for me which must be wider than UK G fit although they also do H.One piece leather luxury.
Will post pic later.

That’s interesting - might have to take a look if they do good wide sizes.

Both sides of the coin, my worn to death gardener’s boots (so comfy, and so easy to put on) and a pair that I would happily have worn in my days in the City

Here are mine, I’ve had them for over 10 years, they are still in shape! 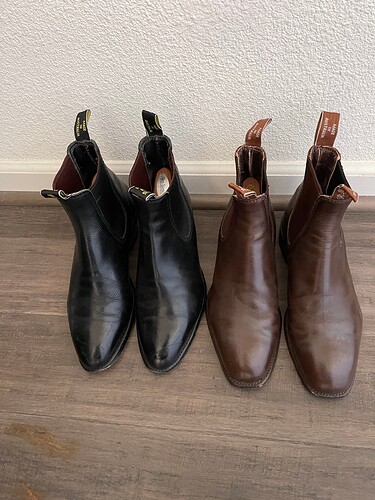 Nice. What are the black ones? I like their sleek shape…

@steviebee, the model name escapes me at the moment.

No problem, thanks anyway…can i ask Cuban or flat heel?

I don’t think it’s flat heel, but maybe I don’t know what I am talking about.

I’ve never got along with boots, but I do have a couple of RM coats: waxed cotton and brushed cotton.

I have had a couple pairs of Crocket and Jones lace up boots for 30 years that are only now coming to the end of lives following two new sets of soles. For some reason the brown ones were always more comfy than the black. But in both cases the leather lining became worn on the inside of the heel. 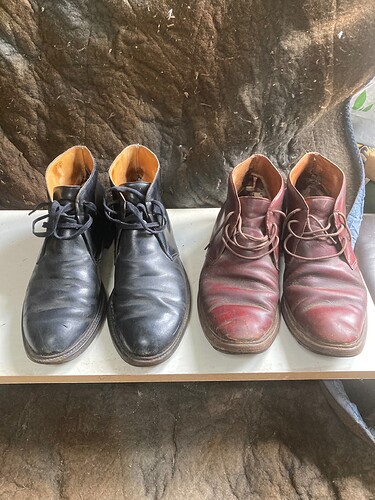 And these are my favourite pair; however, they are not a winter boot. Handmade in Zagreb, I also have a pair of loafers from the same place that are well worn but perfect for summer loafing around. 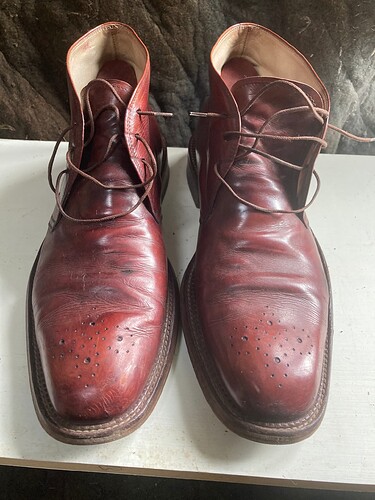 I omitted to include photos in my last post, so following the thread title of “show”, this is my current array of (non-RM) boots:

image1920×846 140 KB
LtoR: 1) Cream boots handmade by Annello & Davide a good few years ago, getting rather tatty now. They made my original snakeskin boots back in 1971, and over the years I’ve had a number of repeat orders in different colours using the same last. 2) Cream ostrich skin, made to measure in Hong Kong, now starting showing their age. Favourite of my current boots for appearance. 3) One of two pairs of taupe coloured boots by Pavers, this the spare, the other now a bit scuffed from near-daily work wear for several years. The crossover leather detail is a bit fussier than my normal choice, but works in practice and worth it for what is the most comfortable footwear I’ve ever worn …hence 4) and 5), the same in grey and blue, bought online in subsequent sales at very low cost, though not yet won the blue (not actually sure what I will wear them with! If I had blue jeans then that would be obvious, but I haven’t worn blue jeans since I was old enough to buy my own clothes!
2 Likes
Drikus March 10, 2022, 11:43am #19

No R M’S here I’m afraid, have to do with these, my winter & summer steel toe Doc’s. 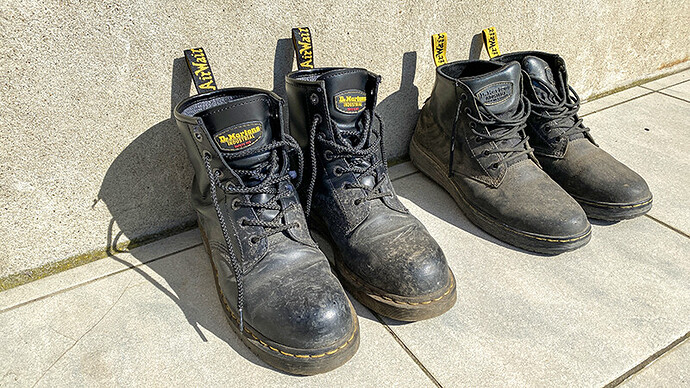 I wish.
Just you lot wait a few years and like me you will bless the brand of Hotter.
I am not yet advanced enough to deal with the Velcro in stead of laces jobbies.
It won’t be long.
Dad even called mother’s shoes her boots. So I am following his lead. 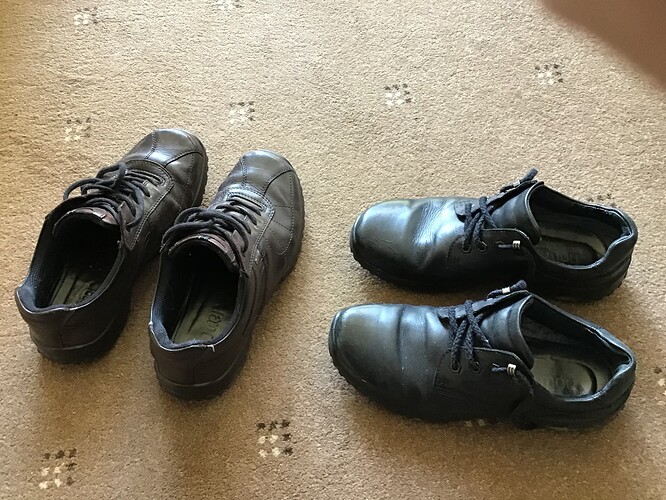