Haven’t posted in a while but I’m in need of some advice/guidance from the good knowledgable folk here please.

I have Klipsch Forte III floor standing speakers. For those not familiar with them they are fitted with a wooden frame ‘base’, somewhat in the same manner as IBL’s (which I owned for 17 years) came fitted with a metal frame stand. This base has no provision for fitting any kind of spikes or feet at all. It just has flat metal studs in the corners which hardly project at all from the base surface.

I’ve had them just resting on our medium pile carpet which has underlay and this is over an old suspended wooden floor. I’ve been very happy with the sound but recently I’ve started to feel that the bass could be tighter and cleaner. It was an itch that needed scratching so I purchased 8 Giant Fat Gliders from Herbie’s Audio Lab in the US to place beneath the speakers and hopefully decouple them from the floor.

They arrived this morning, along with an unexpected £40 import charge - ouch! It took only a few minutes to slip them beneath the corners of the speaker bases and then to begin listening and evaluating.

Well, they certainly do what it says on the tin. Bass is much cleaner and tighter, with better pitch. Midrange and high frequencies appear smoother and more controlled and the whole sound is somehow more detached from the boxes. Macro-dynamics appear freer and the sound goes louder and quieter with less apparent strain.

Overall a really nice result. BUT - just a few niggles. I sometimes get the feeling of slightly reduced transient slam on some recordings. Nothing too serious, but it’s there sometimes. Also, probably as a result of reduced boominess the bass seems leaner and with less weight than before. On some recordings this is a clear improvement but on already slightly lean recordings the mid-range/treble can now seem slightly exposed.

Possibly I can address this by re-postioning speakers closer to the rear wall. Also I notice that the speakers now wobble more than before which may account for the slight reduction in slam. Perhaps when the feet have bedded down into the carpet more over time this will improve.

I was just wondering what other people’s experiences have been when adding isolation devices of various sorts to speakers? Does any of what I’ve reported sound familiar? How did you deal with it? Thanks in advance.

Lots of people report good results with Isoacoustic Gaia’s - they really do make a material difference. I was sceptical but once in place they were going nowhere,

The room place such a huge part in audio performance so I guess all we can do is experiment!

Thanks Gary. I am aware of the Gaia’s but unfortunately they could not be fitted to my speakers as there are no threaded inserts to allow this.

And well…some tracks are just lean, your hifi might now be playing them as they are.

I originally bought a set of the Herbie’s gliders for my spiked Sopra3s to temporarily use them in order to more easily move/slide them around the carpet that is over a suspended plywood floor. After playing around with speaker placement I spiked them through the carpet however,while I’m not entirely certain, they may sound better with improved bass definition on the decoupling gliders! So, is it better to spike the speakers into the suspended,somewhat “bouncy” plywood floor or is it preferable to decouple the speakers? Opposite approaches. Interested in other experiences regarding this apparent conundrum.

From past experience myself I would never spike direct into a suspended wooden floor - carpet or no carpet. It couples the speakers to the floor - which is inherently resonant - and greatly increases colouration. This is why I wanted to decouple my speakers. Although they didn’t have spikes and were just resting on the carpet, there was still enough coupling to result in a relatively boomy bass and coloured mid-range.

If you don’t need your speakers or rack to be moveable then use one of the many brands of spike shoes available on top of the carpet. My choice would probably be Chord Silent Mounts but these are relatively expensive.

I think in your situation you’d benefit from a couple of big thick granite slabs to rest your speakers on. Or concrete pavers etc.

Thanks Mark. You could well be right and I have considered this. The problem is that because of the weight/size of the speakers getting them up onto any kind of platform would be very difficult indeed. Having already undergone hernia repair surgery a few years back I don’t relish a second installment! Therefore any solution must be easy to implement - hence the Herbie’s gliders which can easily be slipped under the speakers just by tilting them forwards and then backwards a little.

Putting spikes onto £1 coins saves your wooden floor and stops the speakers becoming as one with your floor sonically. However, spikes don’t look to be the answer here.

I’d second @Mark84 's recommendation. Granite is often a great choice these situations, but a paving stone is cheaper and should tell you if you are on the right track.

Nick - see my reply above. If I could have fitted spikes then this would probably have been my choice along with Chord Silent Mount spike shoes on top of the carpet. Unfortunately the Klipsch speakers are unusual as they have absolutely no provision at all for fitting spikes or feet of any sort.

Maybe worth contacting Klipsch about this. The apparent lack of spikes or other engineered supports may just be because they can’t be bothered, or it may be a design decision.

I use Shahinian speakers, and none of their speakers are supplied with spikes. Some use rounded plastic feet or castors! The dealer I bought my Arcs from is a long term Shahinian user, and he mentioned that he had tried various different feet with them over the years including Townshend and IsoAcoustics, and while he thought that they bought gains in some areas, he always eventually returned to the factory supplied solution in the end.

The biggest problem I see isn’t really lack of spikes or isolation. It’s the lack of ability to adjust. Most floors aren’t level and on a 4 feet object there’s nearly always some wobble unless you can adjust for that.

Actually the speakers wobbled less without the feet as all four edges of the wooden base ‘frame’ contacted the floor. Now with the feet installed beneath each corner they wobble quite a bit.

I use Shahinian speakers, and none of their speakers are supplied with spikes. Some use rounded plastic feet or castors! The dealer I bought my Arcs from is a long term Shahinian user, and he mentioned that he had tried various different feet with them over the years including Townshend and IsoAcoustics, and while he thought that they bought gains in some areas, he always eventually returned to the factory supplied solution in the end.

An interesting point Chris. I did actually contact the Klipsch British distributor about this some time ago but got a fairly bland and unhelpful response. I know from the Klipsch forum that some people just use them as they are while some people use the Herbie’s pucks to good effect.

This is why I delayed trying anything for so long. My gut feeling was that the speakers were designed to be used as supplied. It feels counter-intuitive though not to have any isolation so I finally decided to scratch the itch. I did consider Townsend Podiums but at over £2K a pair they are hardly a cost-effective solution and bring problems of getting the speakers on to them. Hence the Herbie’s Audio Lab solution.

It’s very early days but to be perfectly honest I’m already having reservations. There are gains to be sure, but I also feel that something has been lost. The voicing is subtly different and in a way I feel its taking the sound in the wrong direction. Cleaner, smoother more civilised for sure, but at the same time a noticeable slight reduction in impact, drive and bass weight.

It’s interesting that your dealer eventually returned to the stock solution with his Shahinians., especially after trying the Townsend solutions which if magazine reviews are anything to go by are not only a vast improvement but absolutely vital!

Really I think I already know the answer and your post has just confirmed it for me. I think I’ll be reverting to the stock solution very soon.

Townsend seismic isolation bars may do the trick 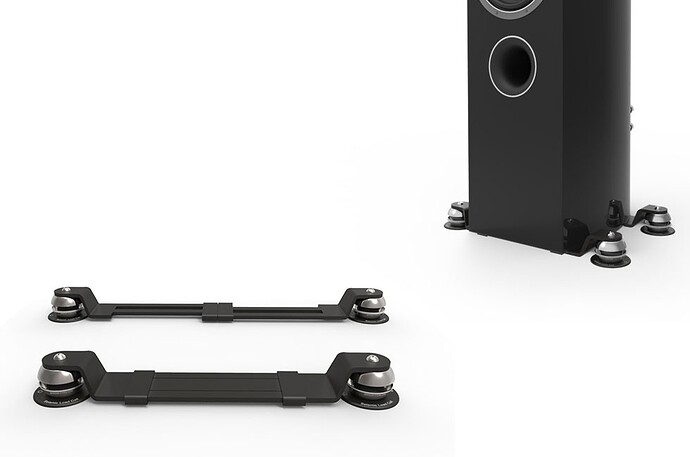 Could you try upwards facing spikes on the floor to the speaker stands? You would only need 3 per speaker to prevent any wobble.

According to this thread, the following thought occurred to me-
Sometimes it is not clear to me the desire to purchase all kinds of accessories that declare themselves, as system component enhancers …
On the one hand, no one will buy / try an electronic component, whose job is to improve the amplification of NAIM, for the reason that we do not want to harm, in its best design and on the other hand, people buy with the best of their money, exotic damping accessories for their speakers.
As a user of NAIM (S600) speakers, designed to be placed on spikes and chips, on a concrete floor, is it even worth considering, such an accessory, which was not in the speaker design track by the manufacturer? Will the upgrade ultimately result in the opposite?

According to Townsend’s website these are not recommended for speakers weighing in excess of 30Kg and more than 1m tall due to stability / safety issues.

Yes I could. However I’ve now reverted to the ‘as supplied’ mode and I certainly prefer it overall to the Herbie’s pucks so I think I’ll just leave it there. Life’s too short.

A valid point and in many ways I think absolutely correct.