Well, that’s easily confirmed by the simple method of connecting up various pairings of red and black sockets and seeing which parts of the speaker make a sound!

True. My speakers have no XO, just a bass filter on the tweeter.
Diagonal sounded at first impressive, but the music seemed disjointed and not as free flowing as the standard connection to the full range mid/bass and jumpers to treble.

I found that - ‘disjointed’ describes it well. This was most noticeable as I upgraded source and preamp. 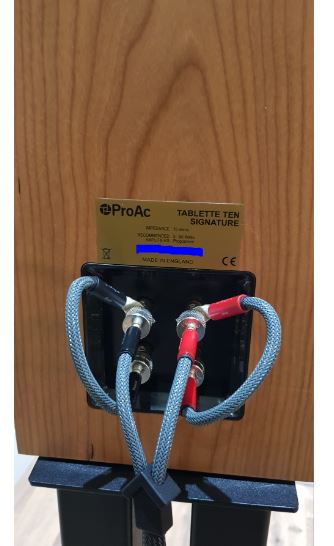 now long gone but I still use the same Phantom speaker cable on my Nait2 SBL setup.

I made my own jumpers out of NACA5, then use some WBT plugs; red to positive, black to negative. 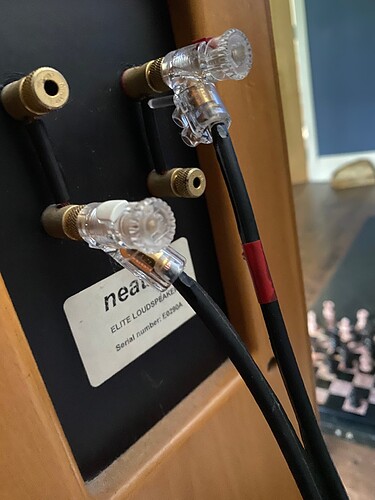 Any change in sound? Large or small? For better or worse?

Anyone changed from the standard cable between the connectors on the back to same brand as speaker cable and thought sound got worse? Is it in the major part of cases an upgrade choosing same make of cable between the HF/LF as the speaker cable itself. One could think this part of the speaker is also part of the speaker design but maybe there are compromises to this specifically and not much effort put into it as with power cords that comes along with the electronics.

I asked Witch Hat this question when I was looking for jumper leads and their advice was to use the same cable as the speaker leads to retain the sound signature of the cables.

…I feel a need to say this again…
The manufacturer would (I think!) have designed and tested the XO parameters using the internal wiring supplied with the speakers. This internal wiring does contribute to these parameters.

Anyone changed from the standard cable between the connectors on the back to same brand as speaker cable and thought sound got worse?

Yes and no, in that order!

The jumpers that seem to come with B&W’s top end speakers have invariably failed to impress me. I’ve always been so keen to replace them with something ‘proper’ I’ve never really stopped to see how much the sound improves. I’ve never noticed it sound worse, though.

Interesting. My dealer said the top B&W, 800 series jumpers are actually good. It’s the 700 (which I have) and below that leave wanting.

He thinks for the price of the 700 series they should come with better ones than they do.

I have had Nordost Valhalla 2 jumpers on all three pairs of my Proacs, now at K6 Signatures. Pre Super Lumina. I started with the lower level Nordost early on, moved into Valhalla 2 level and never felt the need to upgrade. I might try Super Lumina jumpers sometime, but the Valhalla 2’s are plenty good. And, for somebody who loves the controlled and luminous treble, they really shine with the Proac ribbon tweeters. It has been the best of both worlds.

Mine were set up diagonally on the D40R and straight up and down on both K models.

Heresy I know, but in a constructive way. 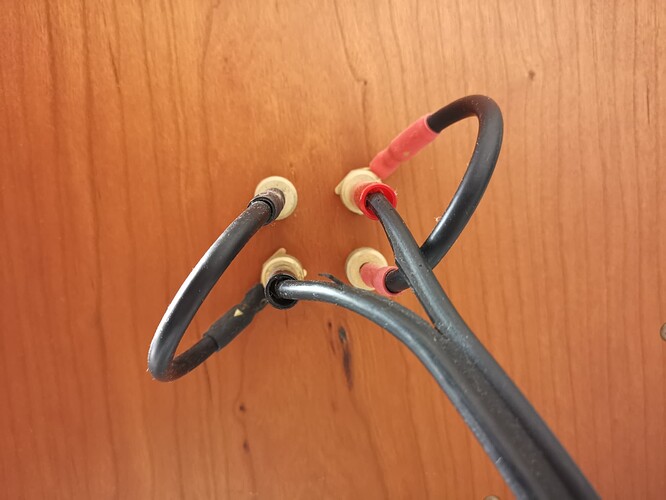 Has anyone here tried diagonal on Titan 808’s? …or in fact any of the Titan range? The 808 is quite a gap between the 2 boxes and would require speaker cable that can be split.

The 808 is quite a gap between the 2 boxes and would require speaker cable that can be split.

Exactly the reason why It cannot be done using Super Lumina as your main cable run.

They have improved, certainly. I know judgement on appearance alone is questionable, but the jumpers that came with my (early-2000s) Nautilus SCMs looked like they’d been made by the tea boy on a £10 budget. The ones that came with my 2015 804D2s did at least have plugs on both ends (!) but look like they’ve been made by the admin assistant on a budget of £40. Progress, of a sort, I suppose.

However, if I’d bought a brand new pair of £6k speakers, I’d want the jumpers (which came in their own little presentation box) to look like a bit more effort had gone into them.

Out of interest, can any 800 series D3 or D4 owners post pictures of the jumpers that came with their speakers?

I included my 805 D3 jumpers with my ProAcs when I sold them. I never used them, having Vertere at the time. They were red and black IIRC, like these (photo from the web): 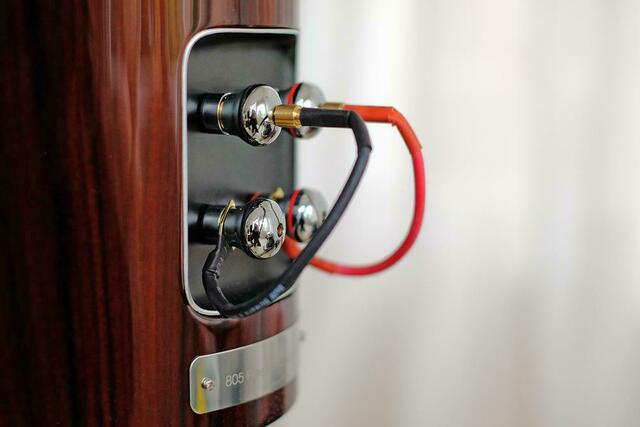 And no doubt they are what the manufacturer used when testing their speakers, which I expect is what all speaker manufacturers do.

I expect the manufacturers think they do their products justice, it would be madness if they didn’t for an trivial sum

And no doubt they are what the manufacturer used when testing their speakers, which I expect is what all speaker manufacturers do.

I expect the manufacturers think they do their products justice, it would be madness if they didn’t for an trivial sum

This is what Proac confirmed to me re Tablette 10 Signature.

I also went back to the supplied links on my Response D2 after trying A5 and TQ jumpers - forsaking brightly lit midrange for an easier listen.