The first 7 albums on UHQR…this is going to be expensive ! 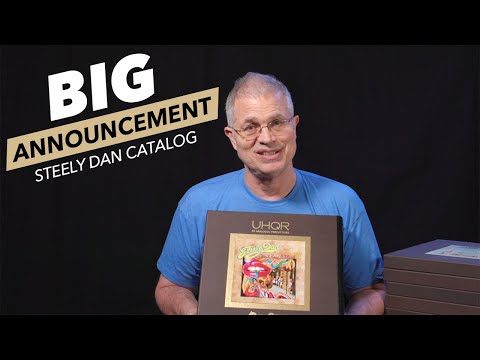 I believe the Steely Dan Master Tapes were lost in the 2008 fire. I wonder what source they have used.

Watch the video…original analogue masters for the fisrt 5 albums 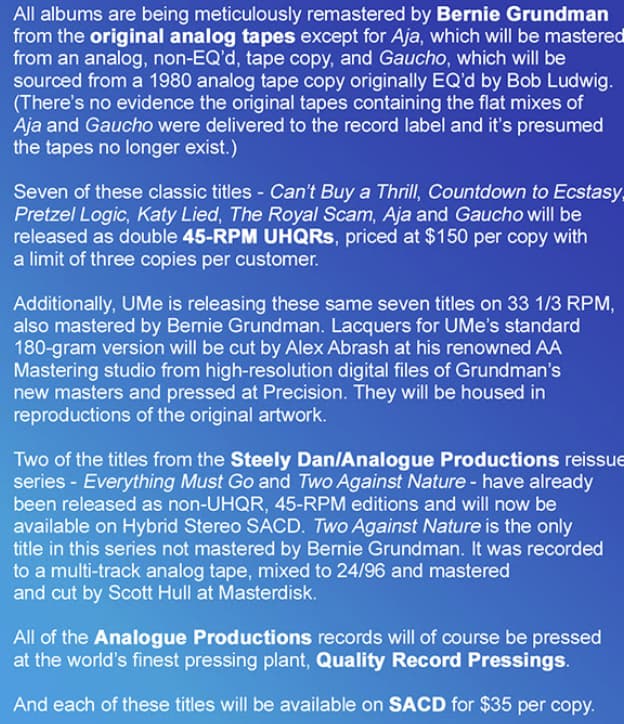 For Katy Lied it was the last of the ABC albums, and used Dolby DBX…….it apparently ruined the SQ. The band wanted to re-record but ABC, put it out per contract. It was disowned by the band. Be interesting to see if something can be saved from the master tapes. For me it has some great songs, but the SQ is lack lustre.

Wow, but I’ll probably only be interested in Aja as its a longtime favourite.

Yeah…surprised Chad didn’t say a bit more about Katy Lied, maybe more will come out in the coming months, that’s one for 2023

Katy Lied was reportedly problematic, thanks, as you say, to the dbx system that was used. Despite that, the US original with Kendun Recorders stamp in the dead wax was pretty good, and much the best issue I’ve heard on vinyl (admittedly I never heard the early MFSL reissue), although certain tracks seem to fare better than others. It’ll definitely be interesting to see how AP get on with it.

It’s exciting news, but also a little disappointing too. I’ve spent years searching out the best copies of each SD release and I’ve been really happy with the ones I’ve kept. When I first heard rumours of the AP releases I was hoping they would be regular AP issues rather than UHQRs. To buy them all, or even just a handful is going to be really expensive in the UK. On top of that, they will need plenty of shelf space. As a big SD fan I should be overjoyed, but I’m not, which is a shame. It wasn’t very long ago when I thought that £100 for one step was getting a bit too pricey. Now we’re into the realms of a £200 release it’s getting to the point where I’m feeling it’s too much. I never thought I’d say it, but I may just pass on these, or at least most of them…

My sentiments entirely Richard but I did buy the Kind of Blue UHQR and it doesn’t disappoint.

I am very (!) happy and satisfied with my nm old Aja pressing. I too will pass on paying these crazy prices.

Aja as its a longtime favourite.

Likewise but it would be a big indulgence, but the thought of the Gadd solo.

@Richard.Dane Hi Richard in total in agreement with your post regarding the pricing of these
releases however, you may be interested in this link? 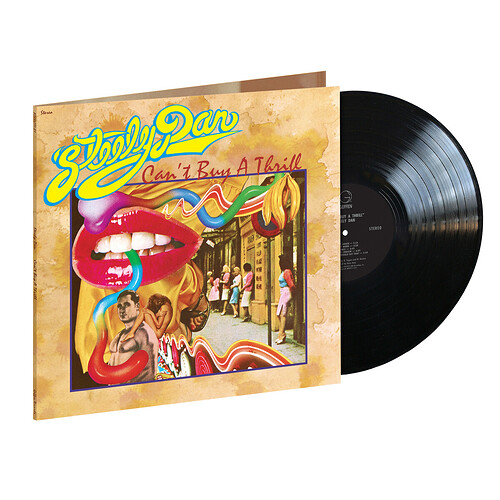 At long last: the classic Steely Dan catalog is back on vinyl. Led by Walter Becker and Donald Fagen, Steely Dan released 7 albums from 1972-1980. The vinyl series will kick off with Can’t Buy A Thrill, now in its 50th anniversary year,...

PS this is the best sounding Aja in my collection 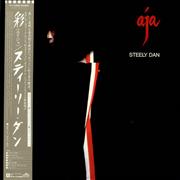 I managed to get a sealed original release of Can’t buy a thrill from the US for just $40. They are out there !!

I’ve been through lots of different issues of AJA and best for me is an early US AB-1006 with the very glossy, heavy card gatefold sleeve. Not overly bright or overly dry, or slightly malnourished like so many others, it’s creamy and weighty, but also open and lucid. A later US AB-1006 is pretty horrid by comparison.

I wonder who has mastered and cut the Can’t Buy A Thrill reissue…?

Yup, me too (but a long time ago and for much less than $40). I must have about 12 different issues of CBaT. None are perfect though. I must go through them again. I seem to recall liking one a lot that was an early UK pink Probe. Some of these early Probes could be quite good.

Agreed, I don’t think I can afford to get more than one or two of these. I might investigate the SACDs though.

I have a pink Probe Pretzel Logic and it sounds fab (though the vinyl is a bit battered).

Agree. But I also love Gaucho and, after the reunion, Two against nature.
Maurizio