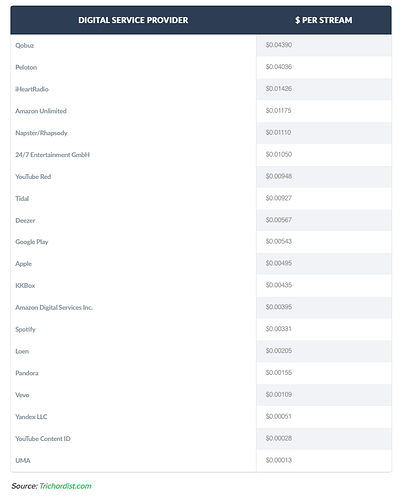 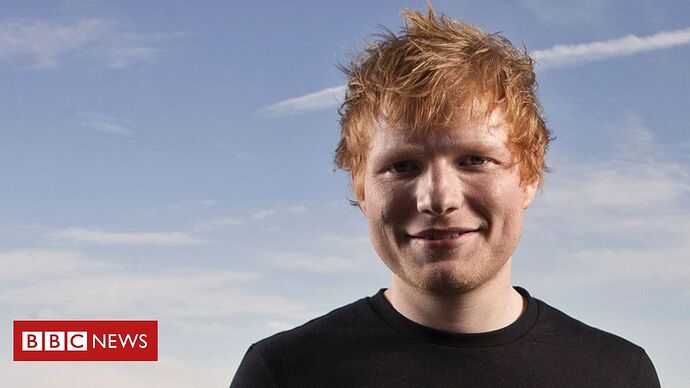 The music industry is weighted against artists, who see "pitiful returns" from streaming, MPs say.

Ultimately if streaming services have to pay more you can almost guarantee that consumers will be charged more, though the current turf wars seem to be bringing better quality for less.

I agree, the only reasons I can potentially see are:

2 -Could it be catalogue related with rates averaged? Qobuz for example have a big classical repertoire so maybe on average they pay more for longer classical tracks than 3-4 minute pop songs?

There should be no scope for negotiating different rates, after all if people can’t access the music they want they’ll go to another provider.

In addition I assume these are sums that go to rights holders not necessarily to artists.

The vast majority of people seem to expect music for free or nearly free. They seem to ignore the fact that artists must eat and heat their houses. Paying for downloads or buying physical products will give them far, far more, and buying direct or from Bandcamp is even better. I meet loads of musicians through my involvement with WemsFest and they are far from what you’d call wealthy. Music needs our support, and if we have to pay more for streaming services in order to give the musicians a fairer payment, then bring it on.

This is why I don’t stream, instead choosing to buy music, mostly on CD or vinyl but increasing looking towards buying it as a download from Bandcamp etc.

It’s funny how The BBC are so concerned about the low prices of music streaming when they themselves are also responsible for negotiating lower and lower fees to other creatives via subscription packages from agencies.

Photography, illustration and footage content via agencies which they use have been subject to this type of pricing for years… as in pre 2010. The BBC etc don’t complain or run stories about that as they’d have to pay more for the content they use!

I have a slightly different take on streaming. I don’t want to buy physical media and contribute to the production of more plastic/materials. I have hundreds of CDs in the garage that I never listen to. I want the convenience and lower environmental impact of streaming. Quite happy to pay the equivalent price for this as if I had consumed physical media.

It’s also interesting to note that I spend more on music now streaming than I ever used to when buying CDs. Currently subscribing to both Spotify and Quboz, so what’s that, around £25/month or £300 a year. In the past I would only buy around 10 CDs a year, so more like £100. I’m also listening to a more diverse collection of music, so my money is going to different artists.

I certainly agree with the decluttering thing. Not so sure about the environmental benefits though. Making plastics is bad for sure, and the polycarbonate used in CD manufacturing is no exception. On the other hand you are replacing this one-off issue with use of a power hungry server farm along with the energy and infrastructure required to send this data to and from locations all over the world. Hard to say which is worse.

I hope the cost does go up …IF the money goes to the artist.

I think my years HiRes subscription this year was £250 for Qobuz HiRes, less than twenty CDs for a huge catalogue that I listen to regularly.

I would say physical has a much bigger carbon footprint, as you have all the distribution costs as well as manufacturing costs.

Perhaps, but it’s a one-off whereas streaming uses resources every time you listen. Impossible to calculate with so many variables.

Logically that makes sense, but I can’t see it happening. Most subscription models are fixed fees for unlimited use: broadband packages, TV license, most software licenses etc. Tiered subscription models that link to usage tend to struggle to get commercial traction as people tend not to subscribe to them in the first place. Physical music media is a fixed price also - great value if you listen to it lots, terrible value if you only play it once!

Much as I personally don’t like the streaming model, it, with fair payment per play to artists, would be the fairest given that in my collection there are albums I’ve played literally thousands of times, and many others hundreds, yet the artist received only whatever they get for a single album sale (or two for those originally on vinyl, replaced by a digital copy).

My own rule is that, if I stream something more than twice then I’ll buy a copy (preferably Bandcamp, even it is fractionally more expensive). That means 20-30 plus albums a month.

There are also a few artists/bands that I contribute monthly to.

If you are thinking about the environment. Buy downloads. Do not rent and repeatedly stream from the streaming services. They need to keep large server farms ready, they need to cool them and after this the data need to transported home to you with routing, caching severs and what have you. And every time you play this is repeated (over a trillion streams/year just in the US).

The environmental difference between distributing CD:s and renting with repeated playing from streaming services is not as big as you would like to think. Especially if you dispose of your old CD:s responsibly.

I dont know if the vinyl situation has improved but last year the big supplier of the right quality vinyl was in the third world, refused any inspections or journalist visits and in general did as they pleased (I think Guardian and some other UK papers has written about it).

I try to use reliable sources but - this is the internet - you never know do you.

There was a recent news item on Radio 4 on the environmental costs of CDs vs streaming, reporting recent research. Perhaps unsurprisingly, it depends on the number of plays. If you only listen to an album two or three times, physical CDs are more environmentally costly, but if it’s dozens of times, then streaming is worse. There’s a crossover point in terms of number of plays: I vaguely recall low twenties, but have probably mis-remembered. I’ve not tracked down the original paper, so don’t know if downloads were also investigated.