REL Acoustics was established in 1990 by Richard Edward Lord thus R.E.L. It was sold to Sumiko in 2006, which belongs to the Mcintosh Group that also owns Sonus Faber. The great sub base designer passed away in July 2017.

For a period of time Sumiko bore a lot of resemblance to REL - class AB amp with similar dimensions, constructions, active and passive drivers and speakon high level input connection. Doesn’t look like Sumiko makes subwoofer anymore. New models carry the Sonus Faber emblem. Also since some years ago REL moved manufacturing to China. Not that I am suggesting quality is any lesser than it used to be.

Some forum users would claim Sumiko sub to be cheap alternative to REL. I wonder If BK Electronics would carry similar story. I personally have not listened to either brands to tell if they are lesser, the same or better than REL.

Appreciate any corrections where I am wrong and any insights you have in these companies and their products. I had exchanged lots of emails with REL when I bought my first REL and think they are a great bunch of guys as a result.

I have two large cylindrical subs in my listening room, at diagonally opposite corners. They are great for movies. And they are not integrated into or attached to my hifi at all.

For some, subs are the answer, but I think for music it’s much much harder to get a decent integrated sound with a sub, and much harder to get the room right so that it works properly. I have found that with the right amps and speakers and placement, there is not a lack of bass in the system. Obviously you room may be so strange that it really would benefit, but I would certainly do a lot of home trialling before buying. It could be that re-positioning your speakers and/or some simple room treatments would give you what you are looking for…

I bought BKE after recommendations here. I didn’t know if a sub would work in my system, in my room so didn’t want to spend a lot of money.
My experience of REL has only been at the Bristol show where I have never been able to stay in the room. I attribute that partly to the choice of music for demonstration as well as the fact that with hearing difficulty and tinnitus, I cannot bear the boom, bang, crash cinema effects that many seem to associate with subs.
I have no doubt that they would work with my choice of equipment and music, they are certainly the first brand that is ever mentioned when sub questions are raised.
The subcontract work I mentioned came from reading reviews and this text from the BKE website -
B.K. Electronics have manufactured subwoofers and loudspeakers for many famous names in the Hi-Fi industry Pro-Ac, REL, MJ Acoutics, Rega, Ruark and PMC to name a few.
My reason for responding to the OP was that my speakers bear a distinct similarity to his.

A subwoofer recommendation depends on what would be the primary usage for it - music or movies. I’m also using BK. Since it’s sealed and doesn’t have passive radiators like the REL subwoofers, it has faster bass, therefore better for music. But the lack of a passive radiator also means that it doesn’t go as low, which might not be so good for movies. In terms of connectivity, basically, both REL and BK have the same options.

I’ve connected mine to the back of my Supernait with piggyback bananas without any issues. Made my own cable using Chord Oddysey install model, so it is pretty much the same as the ones I’m using for speakers, which are Chord Epic. Connection to the speaker’s posts makes sense if I have two subwoofers next to each speaker, otherwise, it’s not very practical. And probably was more of an issue, back in the days, similar to the 3.5 meters cable rule, which is no longer true.

As for the integration of the subwoofer in the system, you can make the subwoofer pretty much disappear if you have some measurement equipment (e.g. UMIK mic and REW) in order to match precisely the phase. By ear would be much harder, but not impossible.

I had a REL strata 3? From 2000.
The cabinet and driver were well built. The electronics were quite poor. Very modest power supply. Doubt it was anywhere the 100w RMS as stated. But more importantly the PCBs had a tendency to show burn marks and eventually fail. I did contact REL to get a spare board, but no luck. In fact no interest at all. Basically saying it was no longer made, therefore don’t bother us. I was also surprised that the website pointed me to the US rather than Wales. Obviously Richard had sold out by then.

@Lucho: Intention is for music.

I’m confused as to why it would make a difference — amp vs speaker — for the high level connection. REL’s high level input just monitors the voltage signal but draws no watts as I understand it?

In this case, you should be looking for a sealed one since it’s faster and easier to integrate due to less phase fluctuation.

I use a Velodyne sub with my Nova and N-Sats and am very happy with it. I only use it for music but it has a remote control and you can program a range of different settings and switch between them so no need to compromise if you want to use it for movies as well.
It comes with a calibrating microphone and connects to your tv to give an onscreen display. Using the remote and the test tone you can dial in a perfect response curve at the listening position and then tweak it your taste if you want to. Just Google Velodyne for reviews etc., mine is a DD12.

I’m not sure either. It shouldn’t matter at all. But remember Naim has all kinds of old wives tales and peculiarities with their gear

I have a Unitilite with sub high level wired to the amplifier not speakers.
In fact I spoke to Naim before doing so and they said it would be fine on that model amplifier.

I also had a REL Strata III Never had a lick of trouble with it. I also had a REL Q201e that had an issue with the amp REL USA had no problem in sending me a new amp. I guess we all have different experiences.

I use two Graham Audio Sub3 which are passive subs.
The speaker cable goes from my SN3 to the Sub3 and then there is a link cable from the sub to my Graham Audio LS5/6: this is the same for left and right channel.
The sub 3s can be positioned anywhere, you just play about until it sounds right to your ears.
Your nearest Graham Audio dealer may be willing to lend you a pair of Sub 3s to try.
I just use my set up for music and to my ears it all integrates well, I love the SQ.
Kind Regards
Roger. 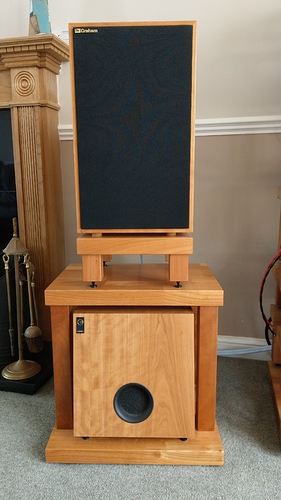 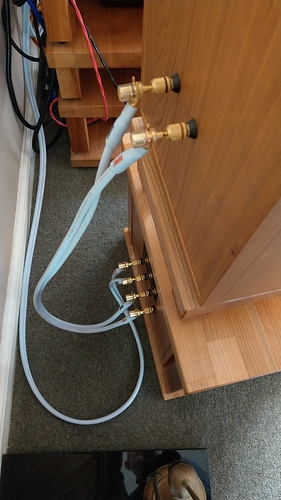 @Col - really appreciate your weighing in here. Would you be willing to post a photo of how you did the connection?

Looks fantastic. I wonder though would the sub and the sn3 be coupled since they sit on the same wooden structure on the carpet? Perhaps they are designed to do that.

@RogerGround : The banana plugs you have, who makes those?

SVS has subwoofers that go really well in music systems because of their DSP settings. Not cheap.

I’ve not had a good experience with SVS - the 1,00 watt digital amp. stopped working in mine just after the warranty ran out, and it proved to be irreparable. A new amp was silly money. I fitted it with a BK 1,000 watt digital panel amp (alas, no longer made) which works a treat, but I only use it for my home cinema system. My Arcam sound processor has built-in Dirac room correction. It’s great for music videos and surround discs though!

Naim nSubs, alas, are as rare as rocking-horse poo these days, but the pair I used to own, for use with SL2s, were very good and very programmable.

I’ve had various subs over the years, including a pair of Velodyne DD15s, which were excellent for movies but not so good with stereo in my room. I can also highly recommend BK, they’re a very good company & their subs are really excellent. I use a small BK in a second system (can’t remember what it’s called) & it produces an astonishing amount of clean bass for its size.

Through a fellow forum member I met Richard Lord a couple of times; he rather liked my room acoustically…IIRC he ended up with a pair of Briks before he sadly passed away.

I did seriously consider svs sb 3000 sealed box with Bluetooth remote app controlled dsp but went with REL in the end because I liked the REL sound. I do so much wish REL has remote control.

I’ve previously used MJ Acoustics Reference 200 with good results. I found the twin crossovers especially useful - enables you to connect from the speakers and from e.g. AV processor for the LFE .1 channel and use concurrently with separate crossover settings.