In these strange days its nice to have some happy stuff …
I can now say that in UK its now officially summer. On my regular long walk yesterday I saw a group of swallows fly buy, then a further on a group of three flying around feeding before heading off to wherever their migration home is …
Then this morning on the same walk, I saw some flying into & around a farm building, looked very much like these are the returning residents.
My next to look/listen out for will be a calling cuckoo, we normally hear the first around 15-18 April.
Then 1st week May, the swifts.
Happy days

Yep, we’ve had swallows flying around our barn for the last week or so. They are probably feeling a little bereft, though, because half the barn roof blew off this winter so it isn’t like it was when they were here before.

I was walking around Abberton reservoir 3 days ago, and at the west end on the dam wall a huge gathering of house-martins arrived on the fence. Been waiting for them to hopefully clear up the midges. Today, same walk they are long gone, but there was a Cuckoo in the distance😁

Ditto… swallows for at least a week now… busy going in/out of the barn and, lying in bed at 6 this morning, when a swallow came and sat on the window ledge

However, in my books, it’s still spring. I need to see either a swift or leaves on the ash trees for it to be spring

We have been walking/exercising on a common not far from here in Surrey and heard a cuckoo yesterday and today, both times calling repeatedly. The bluebells are now well out too. Unfortunately the really large show of bluebells locally are locked away behind a couple of National Trust gates and we won’t get to see them this year presumably.

Gentleman, it is April!

Ne’er cast a clout 'til May is out.

Bruce (wild garlic just about to appear, bluebells many weeks away)

Bluebells are well out here in southern UK Bruce. Here are a few in my garden but we saw hundreds today in some woods a few miles away from here. 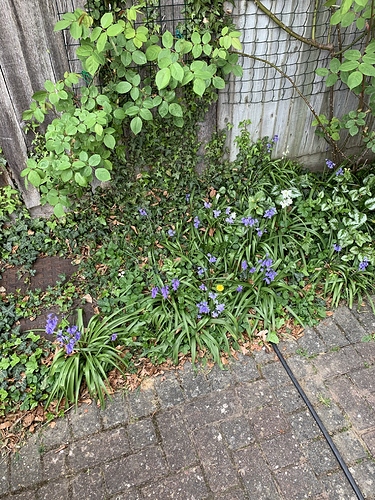 I have a garden full of bluebells, those on the flat & full sun have been out for a week, those on a north sloping bank are always at least a week or more behind. It’s the same with snowdrops, we often have the early ones at christmas, the bank show can be 4 weeks later.

And Bruce, we have the same saying about casting a clout in the south, but we take that saying as meaning may blossom, “Ne’er cast a clout 'til ‘the’ May is out”

I can now say that in UK its now officially summer.

I thought that 21st June is officially the start of summer! That is not in any way meaning to knock your pleasant feeling, but what we have is actually glorous spring weather! And many consider this the best time of year. A pity coronavirus and the associated restrictions inevitably will limit some people’s ability to enjoy it.

You’re taking it all too seriously IB.
Always look on the bright side, and that’s just why I started this thread, goodness knows we need it.
And no not even a swallow makes a summer as the saying goes. 1st June is the metrological start of summer, 21st is the old pagan earth mother first of summer

But whatever we call it, it is a lovely time of year, helped enormously by the great weather.

And whilst I highlighted the fact that the current CV situation makes it difficult fir some people to enjoy it, a positive angle is the minimal noise and air pollution from cars etc.

It is also not summer because I am not playing cricket. Bah.

Of course midsummer (ie the summer solstice) is the 24th June. But I think in the UK many people would regard June/July/August as summer.

(ie the summer solstice) is the 24th June

I never understoodMidsumner’s day being 24th June, when I learnt that 21st is official first day of summer. That makes summer just 6 days long… Mind you, until the noticeable marked changes in climate over the past decade or two, that probably was the average length of summer in Britain, albeit not always the right dates…

The Horse Chestnut trees are not quite blossoming on their candles just yet.
I get really excited seeing them when they do. Such a beautiful majestic tree - more so when they have seen a good few years.
A fairy once whispered to me that it’s good luck to give them a big hug when they do.

Otherwise you are being Astronomically disagreeable.

I think it should be round about now that the wearing of shorts is permitted. It does annoy me when you see the village idiot wearing shorts in the middle of winter - it’s just not cricket.

Also, I’m in the May blossom camp for cast a clout.

the village idiot wearing shorts in the middle of winter

We got one o’ them, wears sandals with woolly socks as well

It dismays me when I see the lighter end of the media refer to the equinoxes as the first day of spring/autumn, as if setting any single day as the first of something as inherently vague as a season makes any sense at all. I’ve never seen the solstices referred to as the first day of summer/winter, but this makes no sense to me either. If those four days mark anything, surely it’s the middle of their respective seasons.

If you must define one day in any such way, I much prefer the ‘local biology’ definitions, as above, much in the same way that I find it preferable to define (say) the start of middle age as ‘the day when you first…’ than (say) your Xth birthday.

The postmen my way wear shorts much of the year…

And I know one guy, a few years older than me (and not a postman), who every year on the same set date ( maybe 1st day of Spring) swaps his clothes around in his cupboards, bringing out the summer ones - including shorts in place of trousers. He wears them until a set date in the Autumn when the swap is reversed. I guess he’s been doing it since his schooldays…