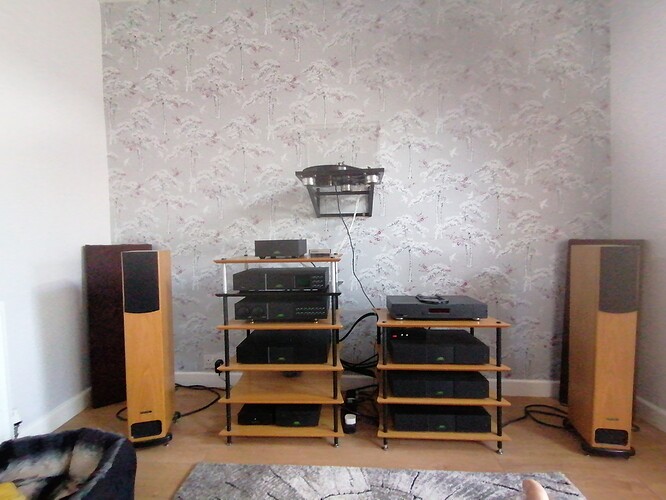 Its finally here, now i can see what the fuss was about.

Any apheta 2 users got loading recommends. Currently 100 ohm and 1nf

I find it really nice with only the 1nf cap plug, no resistance.

That’s what I’m using for the Apheta 2 - 100R Z-foil Airplug and 1nF Cap. I have tried with and without the 1nF and I think I prefer it with.

Richard so no resistance?

Sorry missed that lol. Yeah its sounding sublime fed from 252. What is the z foil thing sorry for my ignorance

It’s a nice little upgrade for the Superline. It’s a better resistor encased in a special Din plug based on the Hi-line Airplug. The difference is fairly small in absolute terms, but nice all the same.

Thanks Richard assume i speak to my dealer for those?

Sjmj Will try that one when fully warmed up.

Any apheta 2 users got loading recommends. Currently 100 ohm and 1nf

I have the Apheta 3 and arrived at 220R and 1nF by listening, currently preferring this over 100R and 500R with 1nF. Though is preliminary and might change (mostly regarding the resistance, I seem to clearly prefer 1nF in any case)

Well its sounding sublime at the moment. Not even warm

Yes, I could live very well with either 100 and 220, I just tried with different plugs and seemed to prefer 220 although I wouldn’t be able to express why exactly.

Are the R plugs actually designed to change the sound signature? I find the R plugs mostly change the volume, while more capasitance gives a bit more warmth.
(However the SL may be a bit overkill on my pickup and definetly on my deck)

Dont actually feel like changing anything. Even swmbo said wow

Are the R plugs actually designed to change the sound signature? I find the R plugs mostly change the volume, while more capasitance gives a bit more warmth.

It’s not so much a question of what the plugs are designed to do, but of the electrical properties of cartridges. Granted that MCs are less sensitive to load changes than MMs, but they exist.
Capacitance is said to not matter too much (though I am clearly preferring 1 nF over the default), lower resistance does damp a typical high-frequency peak, and as always both values interact

But it is correct that the superline will work poorly with mm cartridges anyway, or could a right combination actually make it work also with mm?

Also - to experiment and find a favorite match, is there a effective pattern in which to to change the plugs, or du you just go about it randomly?

I started with everything default and then moved from low to high capasitance, and then moved one step up on resitance and repeated all the way trough.

So far default R and 1nf is nice, but I must admit the changes are minor.

But it is correct that the superline will work poorly with mm cartridges anyway, or could a right combination actually make it work also with mm?

The Superline is an MC-only stage and won’t work at all with an MM.

I didn’t employ a special strategy, thankfully the combinations are not that many. Richard recommended 100R and 1nF for the Apheta-2, as does Rega, so I started with this. Then I tried without a capacative plug (which then uses the default of IIRC 100 pF) and I clearly didn’t like it as much. Same with the higher value. Everyone seems to agree anyway on the 1 nF, so this was settled.

Then I tried 100R vs 220R vs 500R all with 1 nF, and for the time being preferred 220R. According to some advice I received elsewhere on the forum, experimenting with the R was encouraged as cartridge manufacturer recommendations apparently don’t necessarily fit different phono stages. And as it influences the frequency response, I am sure speakers and room also play a role.

100R is also ok and as you say the differences are on the small side (as is to be expected with MC) so I will keep trying and maybe I change my mind. Thankfully, changing the plugs is one of the things I can do quite easily in my setup (as opposed to e.g. cable changes which are a major hassle)

could a right combination actually make it work also with mm?

It might be possible to use the lower gain Superline E and a MM cartridge with lowish output. But this clearly isn’t what the Superline was designed for and peaks might overload the input.

This is probably a stupid question but do you have to power off and insert a transit screw to change loading?