This is my first ever post… here goes!
I have recently replaced my older nd5 with the xs2 version. This does not come with a remote and has no infra red function.
We use the streamer for our tv sound and it is awkward to have no remote to easily switch to TV mode. We often have people to stay when we are not home and most would not expect to have to download an app just to watch tv.
I think the best solution is a dedicated tablet or phone which will support the Naim app and tidal. The Amazon fires are cheap but don’t seem to support apps that well. I therefore wonder about a Samsung tablet. We are Apple users but obviously that is a very expensive option, would prefer to stay under £150.
Has anyone else solved this? Thanks

Fire tablets are just Android without the Google services. Just for giggles I’ve installed the Naim app on my Fire TV stick and it works perfectly so chances are it would work on a Fire tablet as long as you sideload it. Sideloading on to an Amazon FIre device is fairly simple and as for Tidal there is a native app for that in the Amazon app store. Sideloaded apps don’t update automatically so any time the Naim app gets updated you would need to do it manually. Screenshot below is the Naim app running on my Fire TV stick controlling my ND5 XS2.
The 7" Fire tablet is currently on sale at Amazon for £35 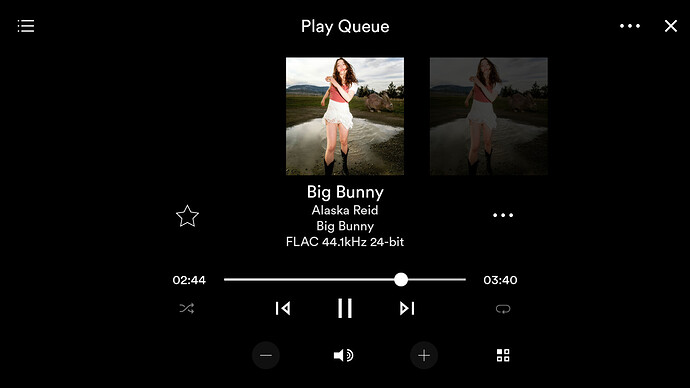 Hi
This looks interesting to me, my iPad (2) is getting old, & frustrating. Could you describe/detail what “side load” means (for the uninitiated) please

This could save me a lot of £, & frustration.
JR

Sideloading is simply installing an app from somewhere other than the official app store. As for Amazon Fire devices it is simply a case of a change in settings to allow installation from unknown sources (i.e. anything other than the Amazon app store) and getting the installation package file on to the tablet. There are plenty of tutorials online on how to do this.

What would be nice of course is if Naim could just make the app available on the Amazon app store. The Fire OS is just an Android fork at the end of the day.

@Stevesky is there any reason why Naim couldn’t / wouldn’t make the Naim app available on the Amazon Fire OS platform tablets?

I have been using an iPad with the Naim app for 5 years, I recently installed the Naim app on my wife’s new Samsung tablet so that she doesn’t pinch my iPad to operate the stereo.

She still pinches my iPad, she tells me the Naim app for the iPad is easier to use. I suspect much of this is down to familiarity.

Many thanks for that, I may get myself a little Xmas present

There are also apps in the Google store that help with sideloading to fireTV.

As for Samsung tablets, I have one (Galaxy Tab A 10.1 from 2019, Android 10) and for me at least the app is unresponsive for a few seconds after screen wakeup. Not so great, but might be just me, don’t know. No such problem on my Android phone (Motorola). Reported to Naim already and trying to figure it out, but I don’t know the cause and if it is only me.

Thanks to all of you for advice and views. Interesting that the app works differently- and less well on android devices. Is this a common thing with apps or just Naim/tidal. Am I right to think the main issue is a lack of immediate response or is there more to it that I should be aware of.

The Naim app works just fine on a variety of Android phones and tablets in this house. No problems with laggy response on any of them. It is such a simple app I’m struggling to think of how it would be any easier to use on an Apple device.

Exactly what I was going to suggest (iPad Mini)

Thanks to all of you for advice and views. Interesting that the app works differently- and less well on android devices.

Android has the inherent problem of so many variants that are changed by phone manufacturers. The app may be just fine on standard Google Android (and works well on my Motorola phone with close to standard Android), but then Samsung and others think they know better than Google and change something, often the whole UI. My particular problem may well be caused by Samsung, it may even just occur on a small number of hardware models (which also may differ subtly between regions).

iOS and its versions are a much better defined target.

My particular problem may well be caused by Samsung

That wouldn’t surprise me. The other half had a Samsung phone a while ago and the Touchwiz overlay on it was horrible and totally spoiled the phone which was a real shame because the hardware was great. Whether current Samsungs are any better I don’t know.

I had a Galaxy S2 back in the day and hated it. This current tablet is not bad UI-wise, but in the end it seems just different and no actual improvement over stock Android. The settings are “simplified” which seems nice on first glance until you realize that it just makes everything more difficult to find that is not basic. The navigation options are worse than stock, IMHO. All in all, the changes (can’t really call it improvements) are not worth the huge increase of variables for app developers.

Problem is, there are barely any Android tablets with 10" screen and current Android. This Galaxy A and the better Galaxy S (way more expensive, at which point better get an iPad) are one of very few choices. And I know of no choice that comes with close-to-stock Android.

Thanks again for all the advice. I was going to try to avoid Apple due to expense and the way they are unsupported when older. A cheap modern android seemed a better option but perhaps avoiding Samsung! At the moment I guess we won’t be having any visitors so time is on our side…

Just to be clear, for all I know everybody else’s Samsung might work fine. I don’t know. Mine works fine with every other app I tried too, including Roon right now, for example.

I’ve always had Android units, phones and tablets, and I’ve never had any issues ever with linking, or signal drop, or the Naim App. At the moment I’m using a cheap Hauwei tablet that my daughter gave me, and it works perfectly.
But people do get used to the subtle format differences of their particular brand of devices. If someone hands me an iphone or ipad to use, I usually just hand it back, because I don’t usually want to go thru the exercise of looking in a different spot on the screen for the icon, or whatever, that I’m trying to access. But the iproducts are excellent devices.
So, I would just go for whatever you’re used to.

@Hilarykr - We used the UnitiLite in the same way - with the TV on one of the digital inputs. After an upgrade to SN3/ND5XS2 the one downside is the “downgrade” in ability to quickly hit the TV input on a remote. In fact, the giant SN3 remote seems totally useless. I just programmed volume onto my Apple TV remote and put the SN3 remote in storage. There should be two way communication for control/automation so that the inputs on the SN3 remote could talk back to the ND5XS2. Seems like an oversight in Naim design. It’s an upgrade in sound but a significant downgrade in usability from ND5XS2.

I agree with the above; it is very surprising that the box does not even retain the last input setting. Every time you have to reset the sound to the TV input and furthermore, when I paused the tv for a short while, the box forgot the input meaning it had to be told TV again. I have just acquired a small cheap tablet which works well so will give it a chance but I am considering if the upgrade is worth the inconvenience. At present I may well take the option of reverting to the previous box unless Naim undertake to deal with this issue in their next app upgrade.

That’s odd. Our TV is connected via optical to the NDX2 and we can pause TV quite happily. I was toying whether to get the ND5XS2 or the NDX2 and the ability to switch inputs with the remote was a major attraction of the NDX2. The ND5 is deliberately stripped down in order to maximise sound per pound but sometimes it’s nice to just grab a remote.