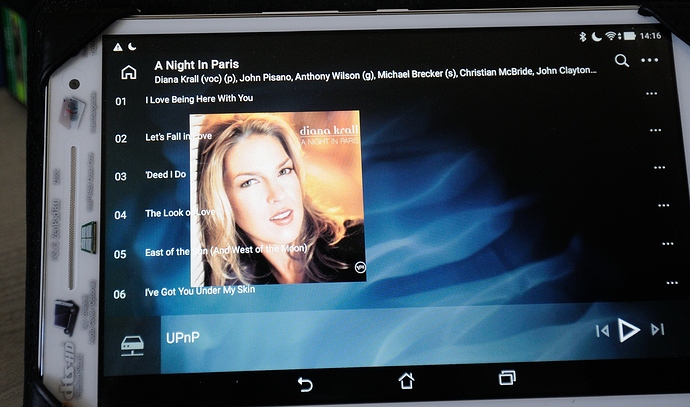 Diana Krall Pic.jpg3421×2021 2.25 MB
I think this just started yesterday - any ideas why the text is now on the left over the picture ?
I also still have the problem of losing connection very frequently.
I put on an album, and tap the screen twice to put tablet on standby, even after a few minutes, deciding to change albums, it has often lost connection and has to be re-booted.
I do not see why I should have to buy an iPad
I understood Naim had new people employed re: software, but I see little improvement ?!
Last year I did check my tablet was up to the specification required + software was up to date.

Does anyone else still have issues (I have not seen any mentioned for a while), and more importantly, has anyone got a solution !?

thanks in advance for any assistance

Mine was working fine but this morning I had a blank screen and it wouldn’t respond to changing inputs etc. Powered right down and rebooted now ok

Everything’s been behaving itself of late here. However this morning the 272 disappeared off the app again, which meant ‘rebooting’ the 272.

Sorry but it’s very unclear to me what the display you are showing is (iPad, Android thing iPhone, a device screen?), and what device is the app controlling?

OK I think not an iPad. But anyway there are dozens of reasons it might be not working properly. If you explain the setup it’s eadier to make suggestions as to what to try,

Hmm looks like the android app on regular album view that has gone landscape. Not even sure how you managed that. I’ve used it for years on several devices and it never does anything but portrait layout.

Possibly a tablet specific issue rather than smsrtphone?

I have had this setup for a couple of years +
I have always used it landscape, as tablet sits on table or chair arm
It has nearly always had a few issues losing connection, but since adding Qb last year, it seems to be worse (perhaps my imagination?)

I live with the fairly frequent re-booting, but this screen issue where text list has suddenly moved over to left hand side of screen, obstructed by album cover, is obviously hopeless.

Well that is a truly ancient version of Android.

I have 3 Android devices. My oldest is on 4.1 and the App has so many issues on this version I cannot count.

My 7.1.1 Android device (already a 18 months old) fares better. The issue is, I suspect, less the App and more Asus no longer releasing Android updates for your tablet.

I’ve had 2 previous Android tablets I used purely for Hulu and Netflix and after 5 or 6 years, the manufacturer stopped doing updates and eventually both services stopped suppirting the old versions and their new apps could not be installed. Specs were fine but without hacking a new OS onto them, they became landfill. While that is doable, you often run into issues finding drivers for the audio, video or wifi chipsets and can still be left with a useless device after hours of effort.

Naim App is considerably newer than 2 (up to version 8 revision as of 2.14 I think). Likely, newer versions are not able to run well on older Androids

Why the screen has changed ?
Why does the tablet lose connection ?
If I really do have to consider buying another tablet, what spec. am I looking for?

I currently use Android 4.1 in my office system with an older 2.3.0 version of the Naim app. I have the latest version on a 7.1.1 Android for the main system and that has no problems either.

Lemme run a test in the next day… I’ll upgrade the app to 2.14 on the old Android and see what happens. It’s an older Asus Zenfone, not a tablet, so it may not reproduce the problem. On a hunch, it looks like a stylesheet issue when using a tablet in landscape mode. As for the losing connection thing… my gut tells me this may not be version related but let’s see.

Very kind of you to try & help, it is so difficult to get assistance with these issues.
I did eMail Naim a few times about a year ago, but got nowhere, and as I do not currently have a dealer to go to, is is tough

Well, I did the test and all I found out was that the Naim app simply is not made available on a version higher than 2.3.1 if running on Android 4.x (turns out my Asus device is actually 4.4.2).

So unsupported new versions of the Naim app are, in theory, hidden by the Google Play store so that you only see compatible software.

That means, I still don’t know what 2.14 looks look on an old Android device because, on my device, it only presented 2.3.1 which is what I had before.

The best I can suggest at this stage, is to go into the Android apps manager, locate the Naim app, do a Force Stop > Delete Cache > Uninstall > Re-install and see what mileage you get.

Thank you so much for your trouble.
I confess, I do not fully understand all you have said, but I will have a go at doing what you suggest
Thanks again

I’m not holding out hope this will resolve the issue. But it is low hanging fruit and should take less than 5 mins and at least then, you can say you’ve done it.

Again, thanks so much for your patient efforts & clear information
I did exactly as above - same result - text on the left - album cover on top ?
It seems ridiculous, I had it all working fine, apart from losing connection issue.
A lovely music system spoiled by this.

Apologies for this experience but thanks for bringing it to our attention. I’ve been able to replicate here using certain Android devices when streaming via UPnP.

I’ll arrange for a fix to be put out as quickly as possible. In the meantime while it looks awkward, the track selection should still be functional, or if you rotate to portrait it will look as expected.

Once again please accept our apologies, we’ll get on it.

Wow !
Thanks for reply and glad it is not just me, very much look forward to fix !
To be fair since I uninstalled & re-installed as per @feeling_zen (thanks for suggestion, I have not lost connection so far.
It does, as you suggest, still all function, and rotated to portrait the screen looks fine
Thanks, my faith somewhat restored !

Being new to the Naim family (MuSo 2), the only disappointment I’ve had so far is with the Niam Andriod app. Most disappointing to me has been it’s inability to search my UPnP server. It’s astounding to me that a company that obviously employs top notch engineers cannot produce a top notch software application.

Most disappointing to me has been it’s inability to search my UPnP server.

What UPnP server software do you have installed?
The app cannot do this on its own, I search my server with Android & iOS app using the UPnP software link.

The app under Android has been flawless over the past few months but a strange issue here today, I have closed the app and restarted but I’m playing Mazzy Star from UPNP but the background is still showing internet radio, maybe I’m controlling Radio Paradise if so I do apologise