Since getting my NAT05 I’ve had a challenge. I only have a double socket, into which the 555PS and 300 are plugged, leaving the poor NAT05 slumming it on the ring main. I really want the tuner on my dedicated mains but don’t want to make more holes in the wall. What to do?

Well, I’ve got hold of one of these Musicworks Ultra G3 mains blocks, a plastic thing with decoupling all over the place. I must say I was a bit sceptical but it actually works. After a brief warm up it’s sounding really good. Somehow everything is that bit more involving. Little details are emerging that didn’t seem to be there before. The natural decay on piano is more natural. I’ve no idea how it works but somehow it does. Weird.

Yes infuriating…much the same, thought the electrons knew which direction to go and how fast etc, apparently not. Would certainly recommend as an upgrade over my wire world extension block.

A couple of years ago a dealer mentioned that to their ears it was better to run a single feed (e.g. 10mm) in to a quality 'block rather than, as I have, a dedicated CU with 6 feeds (all used).

Reading some of the threads about 'blocks et al I’m wondering if this would be better - but I’ve yet to try this out. I’m not a great fan of ‘sale or return’ arrangements around some of the 'blocks.

Well my dealer has brand new premises with plenty of electrical sockets, but still uses these music work blocks instead. So i borrowed one, did not expect it to be worthwhile, much the same improvement as HH describes. Have you a local dealer that stocks music works so you can borrow for a home demo.?

My local Audio T got one in for me to try, with no obligation. I have the Lite version here as well, but that didn’t do much for me. It was different but I wouldn’t say unequivocally better. The sound has improved further today, with more groove coming through. It’s maybe a bit brighter, I’m not sure. Maybe with more running in that will change. The extra Powerline I’m using hasn’t been used much so may be contributing. It’s interesting that I can hear a lot more going on in the mix, especially on the Kraftwerk I’m playing now, yet it all hangs together really well. You’d think that plugging straight into the wall would be better, as there are fewer connections involved, yet it seems to be the opposite.

Thanks HH - something for the Autumn/Winter testing period. Having just had builders in, I defeated the first wave of dust but not the 2nd, which I didn’t anticipate!

Dusty kit aside, my kit is sounding very good at the moment having not undergone a full rebuild for c.9m’s. Is it the weather/deep dampness around earthing spikes/my ears after the Kangos, who knows!

Into the Ultra G3 or into the Naim radio?

The former. The radio has a Powerline Lite.

Have been thinking of upgrading my lite powerblock - and this is perhaps the push I need. Would you expect a dealer to take my existing musicworks block in p/ex?

Don,t see why not. However as they are relatively easy to post etc, you would probably get a better price selling yourself.

I’m sure they’d take it, but not for much. I’d stick it on eBay.

i was thinking of buying one too. Very soon probably.

I was mightily impressed by the Ultra G3 when my dealer brought one round one evening in Feb of last year. It didn’t the house. I know of as least two other forumites who have been similarly impressed. I’ve read the blurb that comes with it but I’m still not sure why it gives the performance improvement that I can hear. Still, I don’t really need to understand. I just enjoy what it does. The price might seem a bit high for a mains-block but since it benefits every component that’s plugged into it, the cost per component is much lower than that of a Powerline (ok I’ve got those too, but I already had them 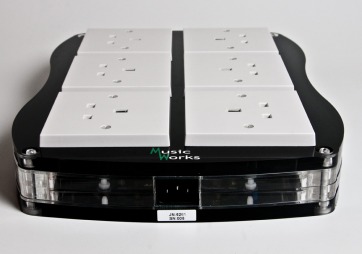 I’d try the Ultra as well and make an informed choice.

I’m glad it’s not me losing my grip. It’s been running for over 24 hours now and seems to have settled. I’m listening to Jon Balke’s ‘Warp’ album, which is piano with electronics and I can hear so much more of what is going on. I don’t have to listen to hear the really subtle stuff, it’s just there. All sorts of things I couldn’t hear before, which makes the listening so much more engaging. Quite how plugging things into a plastic block rather than the wall sockets makes a difference I don’t know. Maybe the star earthing lowers the noise floor and thus lets the low level information through. Or maybe not. It’s not a cheap thing, but from what I’m hearing now it seems to represent good value.

i hope the lite reflex will be good enough, however i have nothing to loose in trying it.

Are you using UK plugs? We need a picture of the French version of that block.