I have loved The Doors ever since I was at school in Edinburgh over 50 years ago, and I remember so clearly the shock news of Jim Morrison’s death in a bath in Paris 50 odd years ago.

The Doors don’t feature much in the Music posts of this site, and I wonder if they are still loved these days.

I never got to see them perform, although I was tantalisingly close to them geographically when they played at the Isle of Wight festival in 1970. My small compensation was standing within touching distance of Robbie Krieger when he did a show at The Borderline club off Charing Cross Road in London many years ago.

Was anyone here lucky enough ever to see The Doors live?

And can anyone suggest a frontman anywhere near as impressive as the Lizard King himself, Mr Mojo Risin, the great James Douglas Morrison?

And can anyone suggest a frontman anywhere near as impressive

The critical tide turned against Jim Morrison around the time of the wretched Oliver Stone movie (that’s tautological; it’s the only type of movie the man makes). I also loved The Doors for most of my formative years, but it turns out that JM was a spectacular a$$hole. That knowledge made it difficult to listen to him at all, let alone with a straight face.

I saw ‘The Australian Doors’ at university many years ago - the nearest I ever got to them. (Jim popped his clogs not long after my first birthday.)

The Doors were a fabulous band. Burned brightly for a short period of time. My favourite album is ‘Morrison Hotel’.

I purchased their back catalogue on 45rpm from Analogue Productions following recommendations on this forum.

Rarely played as they were superseded by CD.

Never one of my absolute favourites and certainly not a go to, but definitely music I enjoy listening to. Some very well known tracks obviously.

I really like ‘The Doors’ for their songs and utter musicianship by the group members. In a way they are American equivalent to our Kinks. Both groups have produced literally iconic songs which drift in our memories and minds…

Jess Roden, a man of whom it has often been said:‘Who?’

I have no idea who he might be, or how he even approachse JM.

Fantastic band, great albums, irregardless of what type of guy Morrison was it was all over after he died.

Soundtrack of my life since I was 13.
The largest single band collection I have, on vinyl, CDs, DVDs and books, and
just received the Genesis publication of Jim’s writings, Labyrinth (superb!)

All six studio albums released during JM’s lifetime are wonderful, with ‘The Soft Parade’ being less so than the others.

I have a soft spot for ‘Strange Days’. If I were at home, I’d make a cappuccino and go and listen to it straight away.

You’ve got me there, Stevie. I’ve never heard of ‘Labyrinth’ and a quick scan of Amazon US produces nothing. Can you say more about the book, and where I might obtain a copy, please?

LA Woman is the first album I bought with my own money and still love it.

Not a fan I take it.

As in ‘a pimple on the butt of humanity’?

Whoever he was, he wasn’t in Jim Morrison’s league.

The Doors are one of the all time great bands for me - saw them live at the Isle of Wight Festival. Those were the days!

I wanted to leave something but all I had on me was a one dollar bill and other-half’s lipstick so wrote “Mr Mojo Risin” on it and left it in the tree. 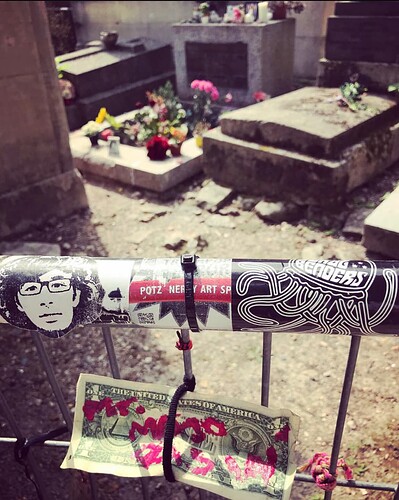 I have a compilation album. Begins with ‘Riders on the Storm’ which my system just loves and so do I, music evoking its era and conjuring for me a journey in the American West. The album then rolls into ‘(Come on Baby) Light My Fire’ which I also love and which for me is one of the all time great tracks by anyone, and the album ends with ‘The End’ which is also brilliant. And strange. Between the start and the finish I couldn’t tell you what is on the album though. It’s OK, but compared to those tracks ‘OK’ is not really good enough. Great musicianship, and I do break the album out a few times a year, but I’ve not felt the urge to dig deeper into the back catalogue.

I saw the film years ago. If I’d been a Doors fan I might have tuned out earlier than I did.

I have been to Paris on a number of occasions, but, stupidly, I never made enough time to visit Père Lachaise to see Jim Morrison’s grave. It is something that I’d like to do before I get too old to do so. Is the graveyard fairly central, and easily accessible, in Paris?

Another Doors-related site that I’d love to visit would be Sniffen Court in New York, where the cover photos for ‘Strange Days’ were shot. I used to go to NewYork on business a lot, but never even thought to visit there. (In fact, I assumed until very recently that the photos were shot in a West Coast location, so it never occurred to me then that I could see Sniffen Court.)

The other obvious Doors places to see would be Morrison Hotel and Hard Rock Cafe in Los Angeles, but I can’t imagine that I’ll ever get there now (even assuming that those two places still exist: I wonder if they do).