The first track becomes the last

Hello!
Soon after the purchase, NDX2 began to notice that the Android application on the smartphone does not always work correctly: When playing the entire album, the first track becomes the last in the list.
Going to the next track is not possible.
If you do not touch anything, the first track will play to the end and stop. If you click on any previous track in the application, NDX2 freezes (the device functions, but the sound becomes completely quiet) and is restored only after a reboot.
A personal computer with Windows 10 is used as a server, where media files are stored on a separate WD 2 TB hard drive. For the experiment, a laptop was also used as a server. Tested software servers MinimServer, JRiver. TvonkyServer in different modes.
Before that, I had other network players, everything worked fine. 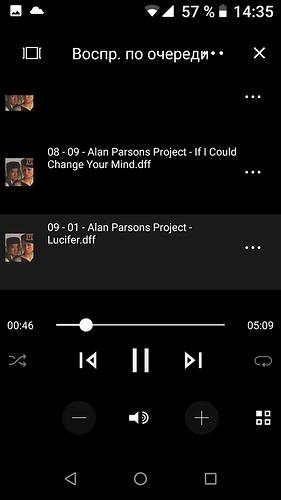 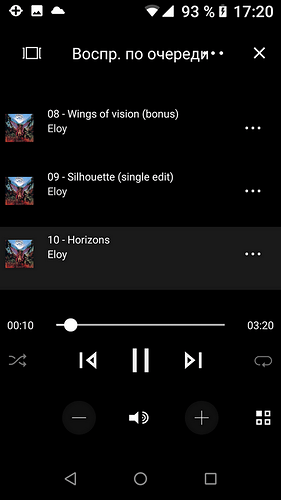 I would check the files metadata, specifically fields like: sorting, file numbers, file names, etc… Different servers / software may use these too, to identify a ‘correct’ sequence of tracks.

The track names are preceded by numbers as you can see in your screenshots. These numbers derermine the order in which the tracks are listed. For example, in your first screenshot, the track Lucifer is named 09-01-… If it was just labelled 01… it would play first, so it looks like your album titles may have been messed up.

Thank. I already tried playing with track names and metadata. Changed the names of the tracks, set the numbers. The Mp3tag program converted the Tag to File Name and vice versa. Please advise what transformations should be performed. 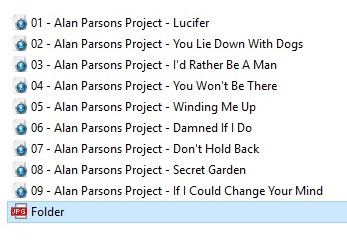 Unless you are playing from a USB stick the filenames for each track are irrelevant. The metadata is used by Asset, Twonky etc to determine track order.
You’d need to show us your tagging data.

To play the album all you should do is tap the first track.

I use Metadatics to, occasionally, correct metadata. Corrections are mostly needed for downloaded files.

Is it all albums, or just that one or a few?

If all albums then it would seem to be unlikely to be metadata, but if only a few albums then certainly look to metadata. And I know from experience that metadata problems sometimes can be time consuming to track down. Your screenshot appears to be the file names. If you look into the metadata (on computer right click and properties - depending on system there may be properties and audio properties) there will be a list of things like genre, artist, composer etc, one of which will be track number. If no track numbers, or if they are incorrect, then that could be the problem. Otherwise go through all the metadata checking it all makes sense.

Thanks for your reply.
I looked at the metadata in the file properties and using the Mp3tag program. Everywhere in the metadata is a number in order.
The network players of another company with my music library worked flawlessly, and NDX2 makes a mistake in 20-80% of cases and if I click on any track the player freezes!
Mistakes happen on all albums.

I also tried the tagscanner program to number tracks, delete metadata and number tracks.
I tried another router, another server and another ethernet cable.

A screenshot of the Tag data is what is needed here with sight of the track number field.

What Android device/OS are you using? And which version of the app? 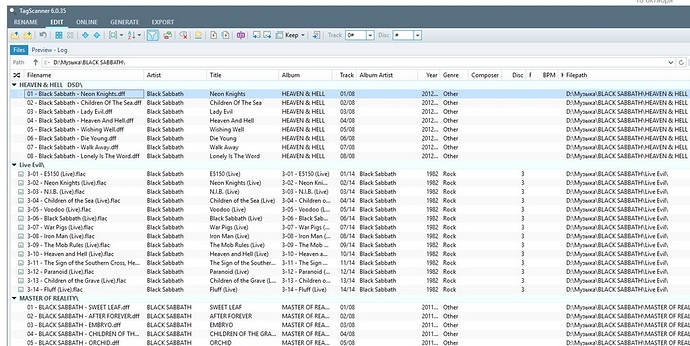 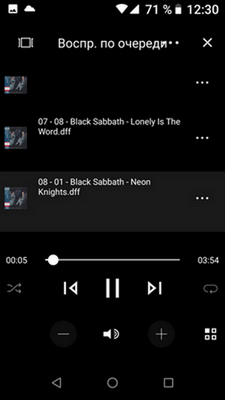 In the Live Evil album, you have track titles where the album title should be, which will cause problems.

I read that .dff files cannot hold metadata. Converting to .dsf may help.

Here is help tagging or changing tags in the .dsf files to improve the quality of the results of local searches in your music player

I have a lot of files in flac format and the problem persists.

Time to visit your dealer, I think.

Have you changed the album title on Live Evil yet? Does it now work?

The name Live Evil has long been changed. Problem still exists.
The dealer suggests taking his server for a test.