The Amazon is rightly called the lungs of the Earth…

The deforestation happens due to commercial interests…

Should we not have a planet fund set up by the UN and contributed to by every able bodied country to save COMMON resources like this ? The payment can be made to the host country and it will be thier responsibility to preserve the forests and rivers and ensure eco-tourism ?

I read from the papers - the president of Brazil Mr Bolosonaro is looking the other way.

Can the Human population allow 1 man to de-nude the Amazon ??

A very serious subject.
First I disagree that Bolosonaro is looking the other way, he is positively encouraging it.
So much needs to be done, by who & how is a multi faceted answer. The UN must be involved (despite as useless as that organisation has been in most everything it touches) The South & Central American countries as a group must do more to help themselves. The G20 group need to bring pressure on. etc etc
The planet running out of oxygen is the main issue but that is at the moment an invisible thing, the smoke from deforestation fires is more visible, but only locally.
There is a far more obvious effect, huge ever-growing blooms of sargassum weed is building in the Caribbean & Gulf of Mexico; the whole area is spending hard earned money clearing countless tons of the stinking mess from beaches, the all important tourist trade is suffering, hotels are closing in some cases, it all adds serious costs & has serious impacts on each of the island countries economies. Local fishing is badly affected as the inshore fish locations are covered & fishing is more difficult & in some places impossible.
What’s this got to do with Amazon deforestation? it’s the the nitrate run off from the deforested areas getting into the Amazon & down into the Atlantic, that causes the sargassum to grow at an unprecedented rate & spread from its natural localised home, the Sargassum Sea. Its spread down as far as the mouth of the Amazon & all around the Gulf & Caribbean.
Globally something must be done, uncontrolled mass deforestation has to be stopped, but not just the Amazon, its a global issue, from far east palm oil plantains to northern tundra wood pellet industries,

Herein lies the problem, it’s a familiar story across the world with aid budgets, etc. 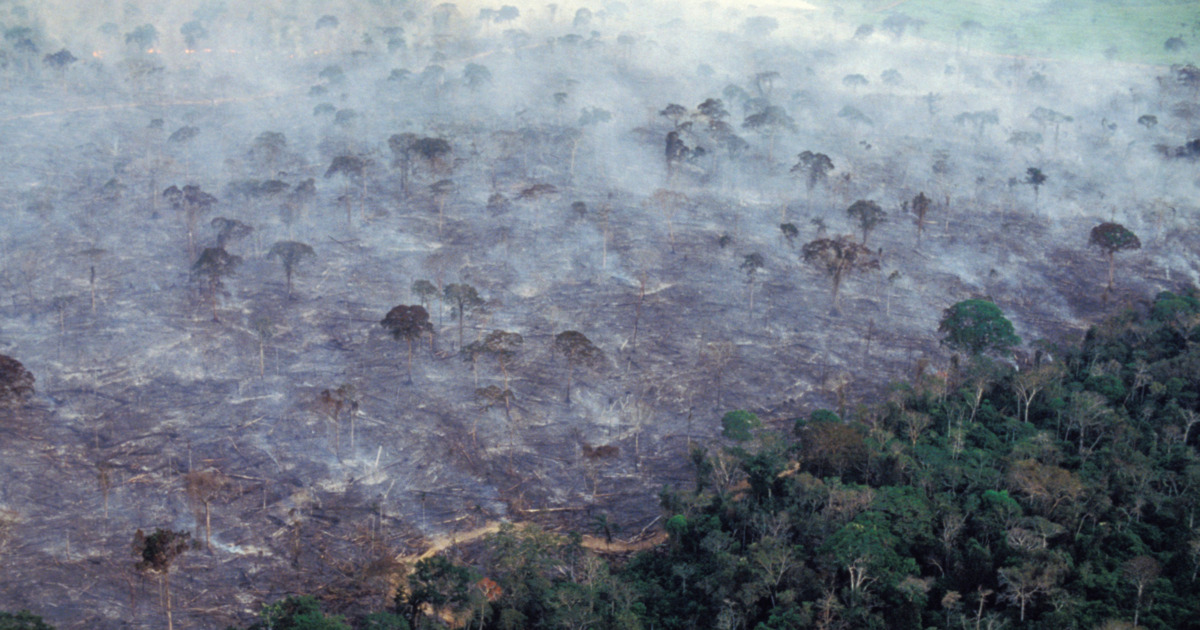 Could One Man Single-Handedly Ruin the Planet?

The issue is of much greater significance than one would want.

An asteroid striking the earth is something that not much can be done.

The actions of the one we aren’t to discuss on this forum will pale in significance.

Am really scared to see no leader or block of nations taking this up seriously.

Brazil’s environment minister, Ricardo Salles, has been heckled at the Latin American and Caribbean Climate Week conference in Salvador yesterday (21-Aug)
The audience rose up against him over the record number of fires in the Amazon that showed satellite data published by the National Institute for Space Research that an increase of 84% for this last year for all of Brazil.
They accuse Brazil’s government & specifically Pres. Bolsonaro for encouraging the clearances.

Suppose the “world” agreed to “buy” oxygen from Brazil. Much like we buy oil from the Emirates. But instead of transporting it in ships, we just allowed the wind to carry it around the world.

Brazil and its citizens would then become some of the richest people on Earth and could buy food, fast cars ie whatever they wanted.

Of course, Brazil wouldn’t be able to turn the oxygen taps on/off like OPEC do from time to time, but you get the general idea.

One can do without Oil…

Indeed the future may we well without Oil

Can we destroy the Amazon and get by ?

Can we get by without clean air ?

Will we be satisfied with the consequences ?

Here we are talking about breathing…

I don’t need any lectures from you mpw. Got it ?

I used the Emirates simply as an example, get the idea ? An example, of how the world is willing to pay for something it wants.

Now, read my post yet again, even more carefully.

You may leave this thread of you don’t have anything constructive to say.

I don’t need your condescending words either.

Either contribute constructively and be polite Don.

I saw fotos about it, burning trees, burning animals…l‘m 52 years old and have tears in my eyes. He burns it for soja and more cheap meat.

Hows about we start reforesting Europe as we have done a good job of decimating trees in our own region of the world.

My post is entirely on topic. And it’s Incredibly constructive. You obviously can’t understand what you read.

It is better to introspect before you tell me I don’t understand.

I have nothing against you.

Just asking you to make your point and to not seem to be causing hurt.

Ok, re-read my initial post and avoid the sort of initial response that you made.

That would certainly be a good start, although I don’t think it could ever compensate for the loss of the massive areas being destroyed in the Amazon. If we want to make progress here, certainly in the UK, we should look at protecting our peat, and the wetlands that create it. Peat bogs hold considerably more carbon by area than any forests, and certainly should be given greater protection here, and in other countries, notably Indonesia, where, paradoxically, they are releasing colossal quantities of carbon by draining peat bogs so that they can plant trees.

Suppose the “world” agreed to “buy” oxygen from Brazil.

Yes, it was the Greenies who came up with the bizzare concept of buying carbon credits so you could pollute.

As with all these things, individuals need to make the change, not relying on walking disasters and virtue signalling from the likes of the UN.

Ah, possible misunderstanding Mike, I really did mean “buy” as in “pay for”. I didn’t mean carbon offset where you pay for someone else to pollute.

A few years ago, I read an article in which Brazil suggested that the “world” should fund it to look after the rain forest, and that other countries with large forests should likewise be funded to safeguard their resource.

As usual, greed and politics get in the way of making things happen.

My suggestion is simply that countries like the UK, who burned their forests c.300 years ago, might do well, along with other European countries, to fund the Boreal forests, Amazon and other tropical rain forests to ensure they continue to be available as a source of oxygen.

just stay off the Caps keys on this thread …