The most dull question on the forum?

Does anyone know if the new preamp remote will work with older models? I’ve a 2008 282.

To liven up the above, I thought I’d give a quick run-through of my Naim journey which started on the 5th Feb this year (which is probably equally as dull!).

I live just outside of Salisbury and have got to know a Naim chap who’ve worked in the factory, but had never heard a system until I moved here 18 months ago and heard his. I’d always been a fan of the lower end of Arcam/Quad, and when I listened to his setup (552, 500) at the beginning of the year I was blown away.

So I ordered an Atom (ahem), as I’d heard great things. But then I wondered what would happen with an added power amp, so I got a 200 which sounded a bit wasted. So then I thought, if I’m adding a box, why get an Atom in the first place, so two weeks after that I bought an XS3 with a ND5 XS2. Since I still had the 200, I hooked that up and it sounded lovely, but then I thought, if I’m adding a power amp, why get an integrated amp? So my Naim chap ‘lent’ me a 202 which I added in lieu of the XS3 and things really picked up. It was recommended I bought a Hicap and NAPSC which I did, and the sound really widened.

But 2 weeks late I then wondered just how much better a 282 could be than the 202? So I went online 3 days ago found a chap selling one, which I bought. I saw he was also selling a 250, so I thought well, why not, so I bought that too. It actually turns out he was also selling a Supercap, so it seemed a bit daft not to complete the set. I’d had a beer.

As an 8 week journey I admit, it’s been quick. I’m not loaded - I had a bit of savings (which has now disappeared!). This is addictive. I know I don’t have the provenance of the Naim peeps who’ve been into it for 40 years, but I love the sound no less.

And the truth is, I’d pay double. Each time I hear something I’d not ‘tried’ before I try not to grin but it’s impossible. I think I’ll stick with what I’ve got for the foreseeable. For me, the journey has been priceless as it’s been huge fun, I’m a fan for life and, most importantly, I’ve heard my music how I always wanted to hear it.

And the truth is, I’d pay double.

Mate, you are a lifer!

(Sorry that I cannot answer the question you pose in line 1).

The answer to your question is yes, the latest spec preamp remote will work with all preamps apart from the very early NAC52 (pre RC5 version).

A couple of other remotes that will work with your NAC282 are the Naim Flash and the Naim R-Com. Note that for some of the more obscure setup functions you’ll still need a Narcom though.

That’s quite a fast track story you have there!
You’ve found yourself in a place some folks take years to arrive at but what a lovely place to be.
Seems your RCU question has been sorted. Do share your thoughts as you enjoy your system and refine it further, plenty of things still left to try and do

The 282/SC/250 is an awesome system and is the end of the road for many people: thereafter it’s the law of diminishing returns. Enjoy the journey!

An NDX2 with XPS2 or 555PS would lift things further for you for sure.

I have NDS with 555PS which is great, but most people tend to go with new streaming platform now.

You don’t need to change anything, just enjoy the music until an itch comes along…

It’s still a great road to drive. I started out on that road 15 years ago and enjoyed all my journeys on it.

Nice story @anon22951169 - you definitely didn’t hang around when you saw the Naim road!

Time to spark the car up and enjoy a few tunes now.

Thanks @Richard.Dane, I had no idea you could get such nice handset upgrades. The reason I asked is because the XS3 came with a really nice, solid remote whereas the 202/282 have the strange pear shaped white & black model.

Ben, the Supercap is a definite upgrade on the Hicap when powering the NAC282. In fact, in my opinion, it’s an upgrade even on having two Hicaps on the NAC282.

The first one I would service is the one that absolutely needs it without fail every 8-10 years, and that’s the NAP250. The reason is due to it being a regulated amplifier (essentially one amp regulated by another) so when things start to go off, they do so in a fairly big way.

Definitely don’t try using the hicap in conjunction with the Supercap though.

Surprised Naim support suggested the Supercap wouldn’t outperform a hicap though. I know it does divide opinion here but I also think the majority agree, myself included, that a supercap is a big change over a hicap. And most people like that change. I never tried two hicaps so can’t comment on that.

I thought for context it’d upload a picture of the setup - the stump above the stand is where the woodburner used to be until I heard a dedicated stand! Warmth or sound…its summer now anyway. 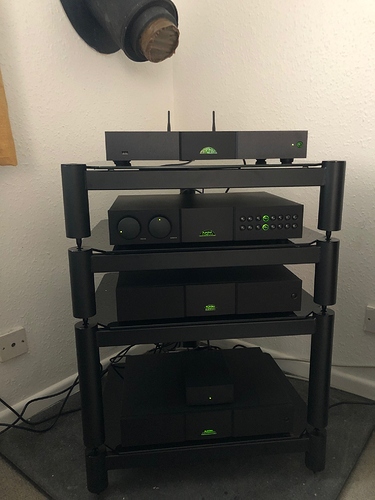 As an 8 week journey I admit, it’s been quick. I’m not loaded - I had a bit of savings (which has now disappeared!). This is addictive. I know I don’t have the provenance of the Naim peeps who’ve been into it for 40 years, but I love the sound no less.

And the truth is, I’d pay double. Each time I hear something I’d not ‘tried’ before I try not to grin but it’s impossible. I think I’ll stick with what I’ve got for the foreseeable. For me, the journey has been priceless as it’s been huge fun, I’m a fan for life and, most importantly, I’ve heard my music how I always wanted to hear it.

It’s surely a quick journey for you. It took me about 7 years to go from NAC 202/NAP 200 to NAC 282/NAP 250DR. I have not tried the higher level Naim gear but I’ve mentioned it many times on this forum and elsewhere. I share the same sentiment with those who regard the 282/250 as endgame amps. It’s a very accomplished system in its price range, a sweet spot in the Naim range. Of course you get the better sound if you go further up the range but the 282/250’s quality will ensure that you get high quality sound with many premium loudspeakers out there. The same cannot be said with the level of amps below it ie. 202/200, in my experience.

I’ve said it many times that the 282/HCDR/250DR are the endgame system for me but it appears that some are endorsing the SCDR over HCDR including Richard. I need to resist the temptation.

I presume you haven’t received the 282, 250 and SC yet. Be prepared for a nice change. I was swapping between 202/200 and 282/250DR for the past few days and there is no doubt the latter is clearly superior. The differences will be more significant if the speakers are more revealing.

I’d stick the Napsc on the floor under the rack. You don’t really want things stacked on top of each other. Also is that the 250 or the SC on the bottom?I’d have the SC there, further from the 282. Power supplies are best kept as far as possible from the pres without stressing the interconnects which should be fine on that rack.

Also, you’ll be in for a treat when you service and DR upgrade the 250. The DR version is another big upgrade.

What speakers are you using? Sorry if I missed that.

Thanks. It’s the 250 on the bottom; will swap round. I did actually do a quick search on this forum and I thought I did read power amps on the bottom.

Give it a try. At the end of the day if you’re current config sounds better you can always swap back. But the usual rule is PS as far from Pre as cabling allows. Your rack config is ideal in that respect.

Will do, thanks. The speakers are Triangle Celius 202’s

The Supercap is an upgrade always in my opinion, including on the sadly discontinued Naim Headline headphone amplifier, which it transformed for me - superb with the big top-of-the-line Grados I used to have.