The Paradise of Fools 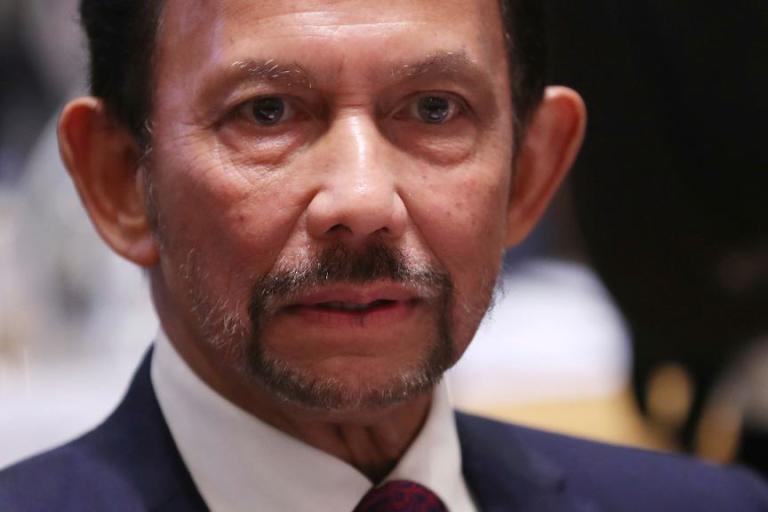 The Sultan and Dictator Hassanal Bolkiah above,…says in a speech that he wants the teachings of Islam to have a stronger position in Brunei.

At the same time,…Penalty tightening are introduced based on sharia.
A cruel and inhuman law,…the EU believes.

The changes are based on a strict interpretation of Islamic law and imply,among other things, that those convicted of sex between men or for infidelity can be punished with death by stoning.

Even rape and robbery will be able to give the death penalty in the Southeast Asian state in the future,…and thieves can get hands and feet severed.

I Really Wonder Where Mankind Is Going,…When These Fools Are In Our Midst.
I don’t think this above is true,…do we live in the Middle Ages.?

Do you live in Brunei and are affected directly by the law?
It’s actually a case of prevention is better than cure.
We definitely do not want criminals who feel free to do whatever they want and wil l go scott free or with just a slap on the wrist after they have destroyed other people’s life. Its a different way to look at things rather than just focussing on the negativity of it. just my 2 cents.

I live in Sweden. Okey…Very interesting…

So You think it’s okay to Stone People To Death.
Yes,…you and I really have different perspectives on what human behavior means.

"that those convicted of sex between men,or for infidelity,can be punished with Death By Stoning."

In other words,you think that this above is also a human behavior…Or how.

I dont see this going anywhere when we only look into one direction without trying to open our minds to other people’s view.
Knowledge is the key and when we comment on things, should be based on knowledge rather than what we think it is.
syariah law is actually a way of life and stoning/beheaded or whatever you think of it may only comprise 1% of the whole thing.
And it only applies to Muslim and you do not have to worry if you are not one.

And it only applies to Muslim and you do not have to worry if you are not one.

If you live in or visit a country that has adopted Sharia law, it applies to you as well, and not “just” to Muslims. And that is aside from the fact that there may be Muslims in the country who do not recognise or wang the extremism of Sharia law.

Regardless, is there any reason why people shouldn’t express their opinion as to what to them is barbaric behaviour, whatever the background to that behaviour?

Knowledge is the key and when we comment on things, should be based on knowledge rather than what we think it is.

Consoglieri,…In Europe We burned “so-called” witches at the stake in the Middle Ages.

But we have evolved since then,and become wiser.

For us,…And The World’s Other Civilised Countries,.The Time Has Not Stood Still.

Frightening that no development has taken place in some countries,…they are still in the Middle Ages in some issues.

Well, in contrary, we all are created differently. Thats why there are many types of people and tribes around the world. One rule to rule them all will not be suitable. Look at what happened in Libya and Iraq. They just cannot take democrasy and they needed leaders like saddam and gaddafi to rule the people. All western world thinks is democracy is the only one that is right.

Now look what happened to them. People are killing each other and there is no peace. Is this the democracy that the west envisioned? Same goes to syaria law. Have u ask the bruneian whether they reject the law? If they want it to be implemented, who are u to question? Look at what is happening in the west now.

Does your view on the necessity of dictatorships condone torture, imprisonment without trail, genocide and state approved murder? Unfortunately these were part of the regimes you refer to and seem to be endorsing.

Jonn…have u been to Libya during Gaddafi’s so called regime and experience for yourself how the people there live their lives? or u just pick and chose from the media what u want to hear. I was fortunate enough to have work stints to Tripoli right after the economic sanction was lifted and before nato started bombing the hell of Libya.

Now, just tell me what u know as i want to see whether u really know and understand what was there during gaddafi.

While you will no doubt site free education, healthcare and subsidised housing in justification, Gadaffi ran a police state where dissidents were murdered and freedom of speech and association were met by violent repression.

You answered your own question Perfectly John. That part of the world needed dictatorship cos thats what they needed. Democracy will just not work there. Now the country is in the worst of shape. No one formula can be applied everywhere. Western countries might need democracy but some others need dictatorship to control their countries. Same goes with syaria law. If u go to Brunei, they love for their country to impose the syaria law. There is minimal or almost zero crime there. And thats what they needed. So let them live in peace. Btw when i was there, people just sleep at night with their front doors open cos nobody would want to enter other people house to rob. I believe it is the result of the syaria law

Boycott Against Brunei For Sharia law.!

Several large companies break with Brunei since the country tightened their Sharia law, INCLUDING by introducing stoning to death as punishment for homosexuality.

In London,travel advertising for Brunei is removed from public transport.
The Sultan,the dictator of Brunei announced in the week even that infidelity is to be punished with death,and theft with amputation.

As I said,…The Paradise of Fools,and your defense Consoglieri for this folly is just tragic to read.
But It seems you do not understand for yourself.

Back To The Middle Ages.!

All countries in Europe condemn this,…And in the rest of the world.
Many have also imposed sanctions against Brunei.

But you are defending Stoning To Death,…The view of the woman as a lower standing individual etc,etc.

Is it not time to wake up now Consoglieri,and start living in the present year 2019.

Also,…You have not responded to my simple straight question in my first post,…Take and do it now.

"that those convicted of sex between men…or woman,homosexuality,or for infidelity,can be punished with Death By Stoning."

In other words Consoglieri,…you think that this above is also a human behavior,And a good punishment…Or how.?

It’s hard to change the thinking of the true believer, this thread kind of proves that.

However, we do not need to go back to middle age in order to see that homosexual acts were seen as criminal behaviour also in western countries (e.g. in Finland the applicable law only removed/amended in 1971, still listed as sickness until 1981). So how much better we actually are? Ok – there was no brutal capital punishment in place.

Ok – there was no brutal capital punishment in place.

I wonder if Consoglieri would throw the first stone against his son or daughter,if any of them were homosexual.??

Please Reply to that Consoglieri,…It is also a straight simple question.

I find this Islam stuff quite confusing. One minute we are being told not to critise them. Next minute, it’s condemn them.

Well, I’d agree that stoning gays is wrong. But I also live in a western democracy that is quite happy with eradicating those with genetic difference like my daughter before they are born. Not sure which is worse and who has the moral ground.

In London,travel advertising for Brunei is removed from public transport.
The Sultan,the dictator of Brunei announced in the week even that infidelity is to be punished with death,and theft with amputation.

I am sorry but these are meaningless gestures. These companies paid more to release those press releases than their boycotts are worth.

I am sorry but these are meaningless gestures.

Jan,…Well I know,…But many,many little things get together much larger.

And the symbol value,…
The fact that the rest of the world does not accept this,is much more important.
And that the Dictator becomes “Frozen” in the global community.

If you want anything to happen in Brunei it takes more than George Clooney stop having his family reunions at their luxury hotels. They have enough money - they dont care.

You need to stop buying their oil/gas,

Remember a few yeas back when the Swedish king went there to party, play tennis and sell a few Swedish weapons? We had a real stink about Brunei in Sweden, signed petitions and probably a few boycotts. No George Clooney but a lot of our local celebs.

Brunei is a country under constant emergency powers since forever, and islam has long been the state religion. Those cruel punishments were in practice long before our royaltys went there to dine with the sultan.

I’m wondering what’s the different between Brunei & Saudi Arabia or any other country that has Sharia law that we trade & cooperate with on a day to day basis. Not saying it’s right, just making a point.

I think the OP is “trolling” (I understand that to mean deliberately attempting to sow discord via online forums). Even the thread title is insulting.