The Recording Function on Pres

What for are you using the recording function on the higher end naim pre amps? 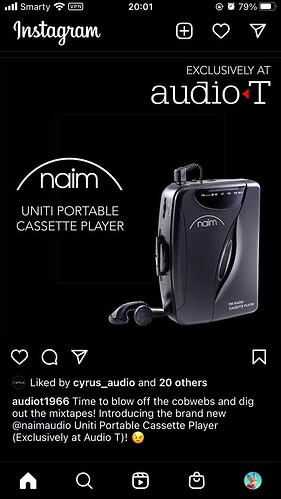 You can listen to one input and record another, if you do such a thing. You can also use it to listen to a different input on headphones. The amount of additional cost is small, so why not

The Headphone thingy I understand. It can be useful.

Ohhhh this is useful. I don’t own tapes or tape device or LPs, but can understand how this can be useful to some.

So the in/out plugs can be connected to a dac and just mirror the input? Can this be done on the integrated amps as well (obviously with the same source/target)?

You can theoretically connect whatever that takes the same signal as a tape recorder would.

The NAIT XS 3 [same for SN3] av and stream inputs have associated
outputs that enable the selected input signal to be routed
externally; to an audio recording component for example.

Thanks. This can actually be fun

plug in a DAC

Well obviously not a DAC but ADC, analog-to-digital
@Ivo

I have a Stax energiser on a record output just in case I ever want to have a listen to my headphones.

Do people still record, and if so what? Hi-Fi Corner

I have a NAC102 pre-amp, but the more expensive models have a whole second row of buttons (and therefore electronics) that are used to direct a selected source to a recording device. I doubt people are using TDK SA C-90’s anymore to record the “Top 20” to cassette on a Sunday night, so was wondering whether people do still record, and what they record to, or are these extra buttons and associated electronics a waste of time in the 2020’s?

Yep its what I understood.

The tape out is critical in my opinion. But a seperate record output selector is not. I think this hearkened from the days where you might have a CD playing while also taping a program off the radio.

For sure, that still happens. But it’s an edge case. Recording now is far more likely to happen while listening to what you’re recording. Simply because your ND streamer doesn’t let you play something off Tidal or UPnP while sending web Radio4 to another input. No one wants to buy 2 streamers to satisfy that previously common scenario.

I think the single bank of combined listen/record buttons as seen on everything below the 282, is sufficient for 99% of users.

Headphones at the moment but I still hanker after a Nak!

I use it for recording. I use a pair of Nakamichi cassette decks, a pair of Marantz PCM digital recorders and a bunch or R2Rs (admittedly these are mostly used for playback only these days) - very useful, especially the record mute and record mono buttons.

Recording my vinyl via a Mac mini.