The Remote is back in the box

Just love these controls. No need for the Remote. I now just use my mobile phone. 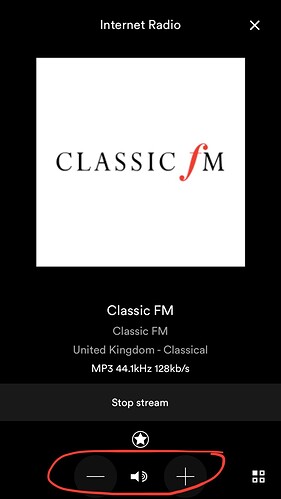 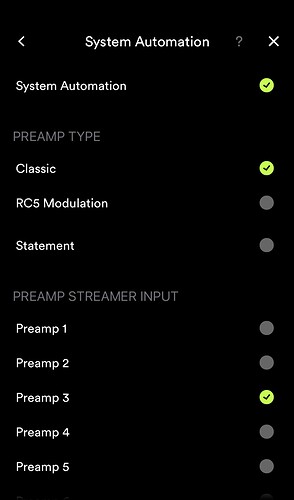 Really controllable volume from the app?

How do I get there please?

Really controllable volume from the app?

How do I get there please?

However, I do keep the remotes around for volume as I find the analog pre’s pots slightly easier to control than by touch in the app

Strange post but if I wanted to control my 252 volume from the app I can do it using remote automation with a fono/minijack cable.

I’m not good with this tech stuff. Trying to incorporate a subwoofer it took me a couple of days with no sound before I realised I needed to select the setting for DIN + RCA in section 4.5 of the analogue outputs menu.

Sometimes the most forbidding aspect of being a member here is the scary level of knowledge of many of the contributors, most of which goes straight over my head.

Have pity, just tell me how. I will never summon the dedication to read lots of threads. The weather is fine and I have to go outside and continue grouting the patio.

Have pity, just tell me how. I will never summon the dedication to read lots of threads. The weather is fine and I have to go outside and continue grouting the patio.

I can’t tell you because I don’t have a 272 and never used one. But being an integrated streamer/pre with a digitally controlled volume, I would have expected to have the volume control right there in the app.

You might have to go to the app Settings (in Other Settings) to enable “bottom bar volume control” in order to see it all the time in the app, but even then it might not always be there on a smaller device like a phone. But it should be there when you go to the “Play Queue” screen in the app by tapping the currently playing album

Enable ‘bottom bar volume control’ in one of the app settings. With the 272 you will then see a slider, rather than + and -.

Enable ‘bottom bar volume control’ in one of the app settings. With the 272 you will then see a slider, rather than + and -.

Yep, my iPhone SE screen certainly shows a neat little round blob on a white bar as the volume control, right at the bottom against the bezel. Except that it is barely controllable unless in a good light with a following wind, and tends to give anything but control. What I really need is the - and + symbols so that one careful dab of a finger increases or decreases the setting by one increment only instead of yawing about the place and drawing a frown or a sigh from the boss. The white blob gives nothing better than a close approximation to the target volume unfortunately. Hence my intense feelings of envy prompted by the illustration at the top of the thread.

With the 272, is there not an option in Settings > Other Settings > Volume Control, which is either set to Slider or Buttons? The NDX2 has this choice when it is set to variable volume. With the 272 and its volume control, I imagine that buttons should work well.

(With separate streamer and pre, and with system automation enabled, there are always buttons and no slider. However, the buttons are not that precise in controlling the analog volume pot, which is why I use the remote anyway)

The buttons apply to the separate streamers, when using system automation and you cannot have them on the 272. For what it’s worth, we used the slider very happily with the 272 we had for five years, and it’s what is used on all the Uniti products and the mu-sos. With a little less demanding and a little more care in use, it should be perfectly acceptable to you.

Hopes raised and dashed in a morning.

I defy even Maurizio Pollini (other comparisons are available) to operate my little white blob with anything approaching precision, so I’ll just have to keep the remote close by for proper volume control and silently curse the jankiness of the Naim app, at least in its current form.

No, I will not upgrade to a separate pre amplifier and streamer just for this. I could get it with the Atom HE perhaps?

and it’s what is used on all the Uniti products

So that’s another no then sighs wistfully.

Thank you Nigel and Suedkiez for furthering my education in the perplexing world of Naim.

Back to the rockpile then…

The best app-based volume control in my experience is the one on the new Linn App which is a revised version of the one in Linn Kazoo. It’s arranged like a rotary volume control with the numerical value in the centre. You can operate it as a rotary slider or with +/- buttons and on a phone it is big enough for even my clumsy fingers to operate with precision.

I don’t think the Naim app is “janky” at all but possibly there is room for rethinking the volume control.

I don’t think the Naim app is “janky” at all but possibly there is room for rethinking the volume control.

Or just get an iPad, so he has a bigger screen. I could not handle controlling my streamer from my phone, too little for my ageing eyeballs.

That’s what’s nice about the Linn App. Just tap on the volume control and it zooms to fill most of the phone screen. Then it’s big enough for even us oldies to control, well me anyway.

Ah thanks. I could never understand the issue with the slider, but I use my IPad to control the Nova, not my phone. It all makes sense now, I suspect I’d struggle with the phone slider’s size. And now I feel dumb, it was obvious.

What you need is good varifocals.

I have good varifocals, unfortunately I also have stubby fingers and clumsiness.

Just get an iPad? Erm, no thanks. And varifocals make me nauseous.

We bought a Macbook Air with M1 chip which lives upstairs alongside the cascaded UnitiLite, but seems now to be used mainly for compiling online orders to Sainsburys. The phone travels with me to all parts of the house, so for me the answer is not to buy more tech gizmos but for the iOS app to be improved with the addition of dynamic type, or simply with fixed but larger point size.

I said as much in a thread about iOS app accessibility and have requested it in the feature request thread. Moaners unite!

That’s what’s nice about the Linn App. Just tap on the volume control and it zooms to fill most of the phone screen. Then it’s big enough for even us oldies to control, well me anyway.

This is what we need. Right?

Yes, it’s far easier to moan than to do something practical, though ultimately probably less satisfying.