I’m trying to have another go at this after some unsuccessful trials with buying downloads from Tidal when I streamed from my Mac through iTunes and Playback.

Now I’m looking at some 96/24 files from Burning Shed - assuming I can buy from New Zealand. Now I have a Uniti Core, do I simply buy and download the FLAC file and copy and paste it into the downloads folder of the Core using Finder on my Mac. Please tell me, is it that easy? Also, are the higher resolution files worth it? They are actually cheaper than buying a CD that will be lower resolution.

Plan B is for Tidal to hurry up and integrate the Masters into the iOS app for chrome casting to the new generation streamers (saves buying when running a Tidal subscription).

I wasn’t aware that Tidal had ever sold downloads, at keast in the UK.

Now I have a Uniti Core, do I simply buy and download the FLAC file and copy and paste it into the downloads folder of the Core using Finder on my Mac. Please tell me, is it that easy?

Essentially, yes, it’s that easy. Just remember that you will need to use a metadata editor on your Mac to make any changes, as the editor on the Core can only be used on CD rips.

Thanks Chris, I’ll give it a test run then.

hdtracks is another site that sells hi-res (including DSD) downloads. You wont be able to purchase from NZ but just use a vpn to set your country to something like the US and away you go…

Also, I would recommend Roon for its meta data editing function. Get your music files in place, download trial version of Roon and let it go fix all your meta data.

Lots to choose from, and all are quite simple to download and use

A VPN can make it look like you are in the UK, or any country you want, which often allows you to make purchases that would otherwise be blocked to you. It doesn’t always work, as some sites will block payments from credit cards registered in the ‘wrong’ country too. I sometimes use a VPN called ExpressVPN, which is pretty easy to set up and has a free trial.

I used Express VPN. Now using Cyber Ghost. It’s primarily for my security, but has a number of built in advantages. Purchasing music downloads internationally being one of them.

Got it to work

downloaded from Burning Shed in the UK. Copied into download folder in Core and playing. It had no artwork, so got JPEG from the web and copied into the folder, but that isn’t showing - need to look at the Naim guide about that, it may be a naming issue?

Glad you’re making progress. I would recommend that you get a metadata editor on your Mac which will allow you to check that it all looks OK, including artwork. You can add or change the genre, which is often an issue with downloads, and make other changes easily. I’d recommend Metadatics, which costs about £10 in the UK.

Glad you’re making progress. I would recommend that you get a metadata editor on your Mac which will allow you to check that it all looks OK, including artwork. You can add or change the genre, which is often an issue with downloads, and make other changes easily. I’d recommend Metadatics, which costs about £10 in the UK.

This is the right advice! Download the files, and BEFORE you copy them over to your Core, edit the metadata and the artwork. Metadatics for OS X is very good and I’ve been using it for several years now. Some downloads come with only pdf files for artwork; this isn’t usable by most servers.

So in addition to ensuring the the artist, album, track etc. names are right by editing as needed in Metadatics, download an image of the cover art…rename it to folder.jpg …and put it in the folder with the files. Then use Metadatics to import that image into each file. It seems to me that the best practice is to keep the folder.jpg file to under 1 mb in size. I’ll use Preview on my Mac to adjust the color and contrast etc., and the size (to ensure Im below 1mb).

To get artwork that you have copied into the downloads folder to show up (assuming you haven’t got round yet to using software to edit metadata and add artwork as correctly advised by the previous posters), you have to have the artwork as a jpg in the same folder as the music files and it has to be called cover.jpg or folder.jpg
And don’t make it too large - it doesn’t need to be hi res!

You can just rename the jpg in the downloads folder and the Core will pick it up in a minute or so.
Best
David

Apart from HDTracks what download sites are available for hi res files - either natively in the UK or via VPN.

Google is your friend here and you can easily find all sorts of sources. For classical I recommend Prestoclassical, but they only do -classical music!

I just tried Burning Shed in the UK, worked great for a hi-res flac download. Hi re selection looks a bit hit and miss.

Got the artwork sorted guys.

Have been running some A/B/C comparisons, so far I have concluded:

I’m on iOS and a Mac, so I’ve tried Tidal MQA via the Mac as it’s not on the iOS App (yet?). I tried streaming the same CD to my Nova via Airplay - it was pants… Then I tried connecting my Mac to my Uniti2 via headphone out to analogue in. After working out how to get the volume right, a MQA stream via the Tidal Mac App is close to the same CD ripped to the Core - but not quite there. Whereas a hi-res download is slightly better than the CD rip.

That leaves me trying new albums on Tidal, if it’s a very good recording and I like the album a lot, then buy hi-res download as first priority, otherwise CD and rip. For regular once-in-a-while listening Tidal hi-fi and MQA will be fine. Some bands I follow don’t sell digital music, so that leaves CDs for them.

I’m a little surprised that you’re getting good results from the Mac analogue out! That means the DAC in the computer sound card is doing as good a job as the DAC in your Naim streamer. The usual way to try this would be to use a Toslink connection if your Mac has an optical out and let your streamer handle the conversion.

Yes, so was I. It seems odd, I have the late 2014 iMac, that outputs upto 24/96, with fancy changes in output depending on what output is detected:

Learn about the external features and ports on iMac computers from 2012 and later and iMac Pro (2017). 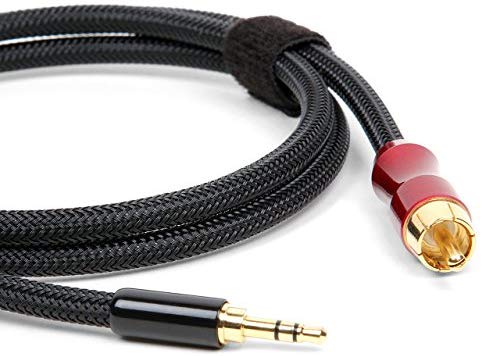 Though, that one doesn’t ship to NZ.

Yes, that would do it if your Mac has a dual purpose 3.5mm output.
Actually, no, I’ve just noticed that’s a coaxial/electrical SPDIF cable. What you want is optical SPDIF, aka Toslink, but the connectors are correct.