Hi all, new here (and to Naim in general). I’ve had my Atom for 6 months or so, not without a few headaches it had to be said, but I’ve persevered because it sounds so good.
I get an issue now and again (seems to be particularly if I’ve been away and it hasn’t been on for a few days) where the screen is ‘stuck’ at the main menu and all remote/front panel buttons are lifeless. Anyone else had this?
Also, I keep seeing pictures online where the display layout is considerably different to mine, and the album cover and information share space neatly side by side. All I get is the square album cover when playing which looks ugly in the different aspect ratio screen. (See photo, from a web search). The Naim website shows yet another layout with the album cover and background colours based on it filling the rest of the screen which is much more attractive. How can I change this? 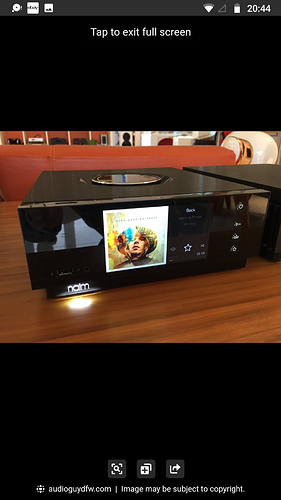 A coupe of suggestions. Firstly, leave it on all the time, which might help with the freezing and the amp will stay warm which will improve sound quality rather than playing from cold.

You can toggle between album view and track view with the remote - bottom panel, top right key.

There is no other views on the screen. The images you see on Naims website are from prerelease software that never made it out in the wild. They really should update them. You can toggle now playing info but it won’t stay on.

The freezing is a know bug with all the uniti range that was introduced last firmware update.

Ah, good to know others have had the freezing experience. Thought it may be related to my network or something. But the screen is a mystery: the following video is from a UK shop on a demo day - is this just an old firmware version?


If so, I prefer that to the current setup, it uses all the screen real-estate and saves the hassle of finding the remote or walking up to the unit to find out the track.
In general, the Atom is terrible at making use of its screen - tracks on internet radio with titles longer than 14 characters cut off with an ellipsis even before they’ve reached the edge of the screen. There is literally no way to see the full title. Why, why WHY can’t Naim make it scroll??? Little things like this area really bugging me on a £2k box. I know it’s small fry for Naim and everybody on here but it’s still kinda crazy that nobody has noticed it even now.
3 Likes
CrystalGipsy September 27, 2019, 7:45pm #5

It was prerelease never made it to the shops. No idea why but there are lots of layouts around that it does not do. It’s a waste of real estate really.

Thanks Mike. I’ve considered leaving it on but I listen to internet radio a lot and there is no way to stop radio streams except to turn off the unit. Which is bonkers. I had a £300 mini hifi streamer for a while that could do this, it also used vTuner. Note I think this is included in the iPhone app but I’m an Android user and it’s absent. It should be hard-coded into the play/pause buttons on the remote and front panel - I’m hoping this will be in a future update but not holding out…

You are not alone with this problem, have a look at this thread:

I have been the happy owner of an atom for a few months now. My only frustration is that the software seizes, too frequently for my taste. I mean, music plays from the last source, but the screen is stuck on a home screen. When this happens, the only remote button that works is the brightness button. The sole front panel button that works is the power button. The only way to reset is to pull the plug and reconnect. Is there a fix for this? As great as the Atom is otherwise, this drives me nu…

There’s a new firmware for the new Unitis that should fix any display issues. See here:

Firmware update 3.3.0 for Uniti Atom, Star and Nova Today sees the release of a significant firmware update for our Uniti range, fixing a range of display and usability issues, plus adding fresh internet radio functionality. Thanks to all Uniti users for their patience while these bugs were fixed. This release will be followed in coming weeks by a Firmware update for our network players – ND 5 XS 2, NDX 2 and ND 555 – that addresses some minor bug fixes, plus also adds Apple AirPlay 2 support. …

Looks like the ticket! Will get this updated ASAP, thanks. I saw that they also implemented the radio play/pause which is great news. Thanks!

I write to them regularly about how the screen layout is terrible. Not much can be done except sending requests to the support team. Although I have no high hopes as the Uniti is on market nearly 3 years. Probably They will release completely new models sooner than make existing ones better.

+1 for the ability to choose from more options regarding the layout of the display. Or, at least, to be able to keep the detailed view on as default.

It seems there’s a bit of a consensus for this doesn’t it? I wonder if anyone from the ‘outfit’ is reading this thread… I do wish that after deciding to put a lovely colour display on that they’d thought critically about how to maximise its potential. The default square album art surrounded by black bars just looks so naff - as I guess enough people thought for them to implement a ‘display off’ option in the last but one firmware. I’d rather have information, thanks!

I write to them regularly about how the screen layout is terrible. Not much can be done except sending requests to the support team. Although I have no high hopes as the Uniti is on market nearly 3 years. Probably They will release completely new models sooner than make existing ones better.

I’ll join the fray I think. Although a little jaded-sounding, you’re probably right about the likelihood of meaningful changes to the screen’s functionality. We can but hope.

I will have to disgree on this, to me the picture of the album only is really pleasing, so I hope if the make changes, they will include the possibility of the “old” design

Hi all, sorry to dredge up this topic again but I’ve had a few instances in the last week where the frozen display has come back, but not quite in the same way as before - it just displays the home screen and doesn’t show album art or playing info (sometimes shows volume level but not always). I’m on the latest update 3.3.0.4300 which I thought had fixed this and seemed to up until now!
Anyone else had this?

Chris, have you been in contact with Naim support about this?

Not yet, I’m just waiting to see if it’s a repeatable bug or if it’s just a glitch caused by connection problems unique to my setup. If others have had any issues I will get in touch with them.

Yes - I’ve had this very occasionally on the Nova since the last update. Normally switching back to standby and back on cures it. I have a vague feeling it is after streaming from Tidal or the Core but I have no scientific backing for that and may well be wrong!

Oh trust me, I noticed it right away along with other things that bugged me about the Atom. So I cancelled my pre-order and went with a SU instead. Surprised that after almost two years the screen layout has not been updated. But there you go.