Hi, I need some basic advice. Have had a core for a few months, then transferred all my music from my unitiserve, and am ripping CDs all perfectly. So now I want to investigate downloading music rather than buying physical product, but I am a novice in this area.

A while back I bought a hi-res copy of 50 words for snow and it sits on a USB stick, the files look like this when I view the stick on my laptop 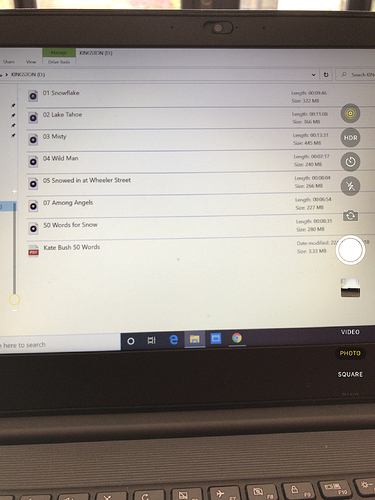 The PDF file has album artwork.

So when I plug the USB stick in my core and upload the files they then appear in a folder with no artist or album name. They play absolutely fine. But I don’t want to end up with unnamed albums and artists on my core in the downloads folder.

The core seems to give me no option to edit the files through the Naim app, in terms of adding artist name or album. It does allow me to change the name of the track, but nothing else.

Do I need to do something to the files on the USB stick before I plug into the core? Is there something obvious I am missing? Thanks.

Hi, I think you have just discovered that Naim servers can only edit metadata on CDs that they have ripped. For anything in the Downloads folder, you need to use a third party metadata editor such as MP3tag (Windows) or Metadatics (Mac) and it’s good practice to do this as soon as you download an album, although it can be done later if necessary.

However you can also make a folder called Kate Bush on your PC with a sub-folder 50 words for Snow then put all the music files in that folder. You put the cover art alongside the music files in a file called folder.jpg or cover.jpg. Then you copy the whole lot into the downloads folder of the Core. I know this does work for this album because I did exactly that with the high res version of that album.

The album sounds sensational by the way.

Thanks David and Chris. You have got me three quarters of the way there. Kate Bush album now sitting on core. Named correctly, and searchable under Kate Bush. Have also downloaded my first album from bandcamp and that sits on the core and plays perfectly. The only thing missing is artwork, but I guess that’s where MP3tag might be of help. TBH it’s a bit of a faff, but I guess regular practice will help.

Yes, it’s a bit of a faff, but once you’re used to using a metadata editor to get things in order, it becomes a simple thing to do. Pity Naim’s can only do CD rips, as this will become progressively less useful as CDs slide into obsolescence.

You don’t need to use MP3tag for artwork. Just get a photo off the www, by searching for CD Cover for the relevant album and then save it to your PC. Re-name it cover.jpg and then move it (eg by copy and past) into the same sub-folder on the Core that has the music files in it. The Core should pick up the change within a minute or so. And the cover art will now show up in the app as usual.

Or the cover art may already be downloaded but called something like 50_words_for_snow. jpg. Just rename it cover.jpg

Thanks chaps. Much appreciated.

My advice for further purchased downloads it to pick flac as the preferred format and not wav. wav is a pita for tags always has been.

Having searched the forum and found this post in addition to your other contributions which have helped me over this subject and not being a computer expert I wondered whether you could assist me further please.

Although I’ve had my Core since just after it was launched and used it exclusively as a server for all my ripped CD albums without any real issues, I downloaded some additional material in the AIFF format which had been made freely available to those who had already bought the boxed set (Underworld - Drift Series 1, 7 CD + 1 DVD) late last year. Having downloaded this new release to my iMac, I then eventually managed to get the metadata etc satisfactorily sorted and then copied it to a memory stick which I then plugged in to the USB socket on the front of the Core and went through the “Import music” process which was fine but the album artist is shown as being “Unknown” (with no artwork, which I have now rectified by following your guidance above). Looking into the Downloads Folder on the Core from my iMac, my main question now is, when opening the Downloads Folder should I have created a sub folder named Underworld and then have yet another sub folder within named after the album title and containing the nine individual tracks and album cover artwork?

Also, in an earlier attempt to get this download onto the Core which hadn’t work out as I’d hoped it would do, I then discovered from one of your other contributions that I could only delete it via my iMac, which I did but although there is no sign of it in the Core downloads folder on the iMac it still showing as a file in the music library with all the track information and you can actually go through the motions of play and indicates as such on the App but of course there is no sound emanating from the system because there is nothing there really to play, so it appears to be a sort of ‘ghost’ file. Is there any way of getting rid of this, I have tied resetting the App and powering down etc but to no avail.

I think the general advice is that when you put stuff into the downloads folder, it is a good discipline to do it the same way that Naim does in the Music Store MQ folder. So you store each album in a folder structure of /downloads/artist name/composer name/album name/music files and artwork file.

But it doesn’t matter how you do it really. It’s not good practice just to put all the files into the downloads folder, not least because it’s hard to work out what is going on and because the artwork won’t work unless it’s embedded in a flac.

Things that are in the downloads folder have to edited by a PC or Mac, as you know. Taking the files out of the downloads folder should make them disappear from the app automatically next time the Core does a scan. You could force it to reindex using the option to rebuild the music index in the app, but note that takes a while to do and your music isn’t available until it’s finished.

There is another angle here which is that there is a bug that sometimes stops all files being deleted from the Core downloads folder. It doesn’t seem applicable to you because you say you have managed to do it, but otherwise I would say wait for the next firmware update (as the fix is in beta currently).

So in summary, I suggest ignore the phantom file issue for the time being, but if your inner OCD won’t let you do that, then rebuilding the whole index is the thing to try, perhaps last thing before you go to bed!

I hope this helps

Many thanks for your very prompt response David.

Can I rebuild the ‘file structure’ for this album on the Core via the iMac or is it best to carry it out on the memory stick and then reload it onto the Core after deleting the existing file from the Core Downloads Folder.

You can just edit the downloads folder directly, as if it were just another folder on your network, which is what it is really!
Best

Once again, many thanks David, you have been a great help.

This is my first attempt at ‘downloading’ onto the Core and therefore I am ‘feeling my way’ slowly in fear of really messing things up and creating a serious problem including my misplaced doubts about this download file format being AIFF because I always rip CD’s onto the Core in WAV.

This episode may give me the confidence to download albums in the future rather than buying the physical CD, you never know!

Thank you very much once again and kindest regards,

It’s my pleasure Derek. I hope all goes ok.

Well, I followed your guidance David and it has all worked out perfectly, so I am delighted!

Hi guys, I read this thread and moved all my downloads to the recommended file structure and it worked great - thanks.

But how can I remove the track number from showing up, see how track 1 shows the number in the track title:

David. Any chance the next firmware update will allow me to edit the files previously imported to the core from my unitiserve? As you know the metadata is fixed and cannot be amended at present. Perhaps you are not allowed to say?

I am not aware of any such planned change, but it shouldn’t be necessary as you can edit files imported into the Core from a Unitiserve if they have been put into the Music/MQ folder, which is where they should have gone.

If the import was somehow made into the downloads folder, which would normally happen only if the Core wasn’t certain that the files originated from a Naim server, then you can edit them in the downloads folder with a PC, using a metadata editor like dBPoweramp if you want to do something complicated, or just by editing what is there if it’s for example it’s changing artwork. Exactly what you can do and how depends on whether they were exported as FLAC or WAV. What is it that you are wanting to do?

Presumably these files are in FLAC rather than WAV? Basically the problem you have is that the title that the app is reading is embedded in the file rather than just being the filename. You can change it using a metadata editor like dBPoweramp. You don’t need to do this outside of the Core - you can use the downloads folder of the Core just as if it were another folder on your network and so if you run the metadata editor, point it at the album in question, make the changes you want (removing the track numbers from the track name in this instance) and then save it back to the Core downloads folder, the Core indexing should pick it up in a minute or so.

Thanks David, I’ll check that out. Cheers - Mike.