In the fullness of time I guess this might be sensibly merged with another thread, but temporarily I have a few comments/questions.

I loved it when Roon allowed me to access my purchased content from Qobuz from within My Qobuz in Roon as although many felt I should store it locally on a NAS for better SQ I wasn’t convinced and wanted flexibility.

I have barely used Roon since enforced updates removed the Purchased section.

I see neither Purchases or Favourites but something of a mish-mash or maybe just Favourites I later purchased?

I’ve not played much at volume yet, but initial experience with London Grammar albums I know backwards amazed me with increased detail/instrument timbre - is this better internet vs NAS streaming in some way or firmware sonic improvements. The downside is a perceived lack of bass, but as noted I’ve not been able to play loud yet.

I’d go so far as to say that unless it’s something to do with streamed vs local content that the latest firmware has brought pretty significant improvements to low level listening clarity which is a significant benefit late at night.

As far as I can see I cannot see my Qobuz Purchases in the Naim app without searching.

I think the category called My Music may be Favourites but I’m not entirely sure - does anyone know?

Also I was struggling the other day to figure out if an item was playing from Qobuz, Tidal or NAS - I updated the app to the current version and now see a little Tidal or Qobuz icon (or UPnP) before the sample/bit rate and format. Is that new or is my eyesight getting that bad I didn’t notice before!

I think the view for puchases you are looking for is under the popup menu when the qobuz logo is oressed, next to the search icon. 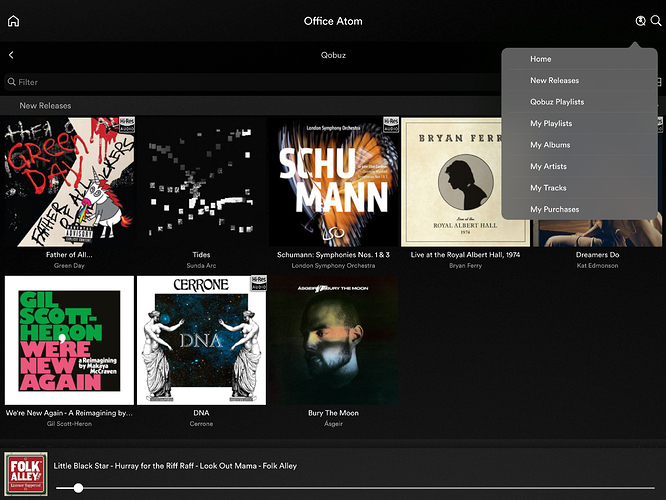 Thanks Steve - I must check the iPhone version as I’d not seen that option.

Brilliant - just found it using that - if I just select Qobuz I only get a scrollable page with New Releases/Qobuz Playlists/My Playlists/My Tracks - is that to be expected (assumed Purchases would be there too)?

As I noted others can’t see why I might want My Purchases (In Roon for example) but i find it very handy so thanks for supporting it.

A minor thing, but when I do select My Purchases the iPhone app shows the Tidal icon instead of the Qobuz one, unless it’s meant to be a switch to go to Tidal:

I can only see the last 50 Purchased albums for some reason too - I just see ‘folder icons’ for earlier ones at the moment - perhaps a glitch will try again and let you know.

Exactly the same bug with the native Qobuz integration switching to Tidal interface when looking at my purchases. Very annoying indeed.

I sent a bug report to the Naim support.