I currently use NAC-62 and NAP-140 chrome bumpers and I am very satisfied with them.
But I want to try Naim Classic.

Have you checked the manual?

I think it stays there for 1 week only before being purged.

Have you checked the manual?

I think it stays there for 1 week only before being purged. 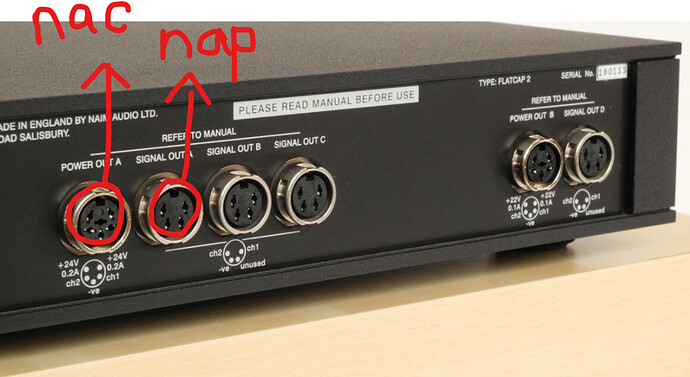 I think there are two possible problems with your idea.

If it had been a Flatcap XS, then at least both supplies would be equal and you could have tried it.

as well as both?

Ah OK I missed the nuance that he wants to power 2 Nacs from a single flatcap.

Dont power both of them from a flatcap 2 at the same time. Use the 24v power socket only with one Nac. You connect them up the same way.

sorry, maybe you can explain complete connection between

I think the OP might be asking if the FC2x can power a NAC62 and NAC112x simultaneously in two different systems. (Apologies if I’m wrong).

You can only use the Flatcap to power up one preamp at the time.

So you can choose to power the 112X or the 62, not both silmoustanely.
The remaining preamp can be powered from your poweramp either Nap 140 or 150X.

Just use the diagram from manual, its quite simple (once you know)

I think the OP might be asking if the FC2x can power a NAC62 and NAC112x simultaneously in two different systems. (Apologies if I’m wrong).

So my conclusion, Flatcap 2X is only useful for NAC-112X and not for NAC-62 if I combine it together in the sense that 1 Flatcap 2X can only supply NAC-112X?

Wrong
You can use a Flatcap 2X for any of the two preamps, as stated above either Nac 112x or Nac 62.

I have just made connection diagram , is it correct ? 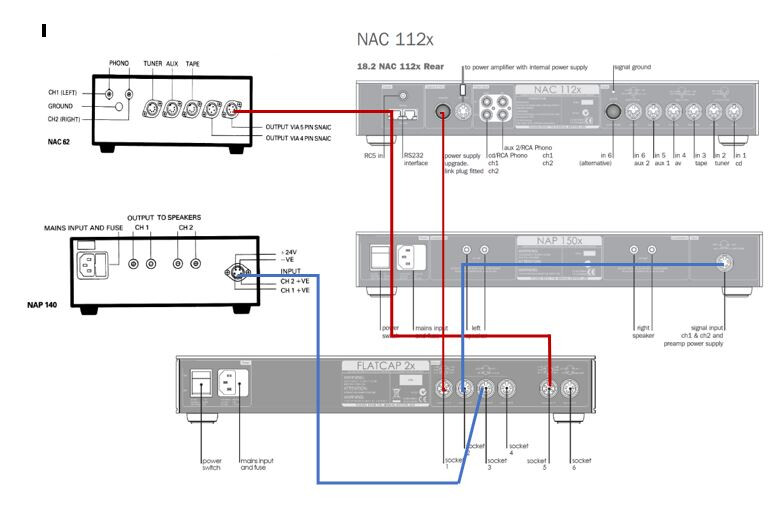 of course, I will only operate 1 system at a time, not both

The second supply of the Flatcap 2 was optimised for the CD5 - which I think was tested by Naim to sound better with 22V cf. 24.

Just use the Flatcap with the 112/150, it’s a nice match. Wait until you can get hold of a Hicap for the 62 then both systems will have the PSUs they deserve.

Notwithstanding recommendations above. As I understand it, and I really do not have first hand experience of separate pre/power, power and signal have to be handled by an associated pair of connectors. You should not just use one of the pair for power only, as I think the OP is suggesting in one of the pics

I think the line the OP has from the NAC62 to the 2X (socket 5) will be taking signal output (hm, attenuated by the volume pot… maybe that’s the issue with using the 2X here, as it was intended for a line level output of a CD player?) to the 2X, but that output will not find its way to socket 2 or socket 3 as the diagram “hopefully” depicts.

But, I really should double caveat this!!! Maybe even triple caveat it X)

…and reading back up the thread, manual seems clear the second set of connectors only listed for source components, not powering a preamp

…also deleted some stuff I wasn’t sure about!