Hi. Sorry to ask such a basic question. Using Naim ND5 XS2. I see that Qobuz, Tidal and Spotify are built in to the Naim App. What is the difference between using Qobuz within the Naim app and using the actual Qobuz App and casting to the streamer? Will I hear a difference sound quality? I’m gradually working my way through all the streaming services taking advantage of first few months for free before choosing which one to subscribe to.

Also…I’m also burning my entire CD collection onto a portable hard drive using FLAC. Will the CDs on the hard drive sound better than that same CD played through Qobuz if I plug the hard drive directly into the streamer? Or should there be no difference?

Have you tried Qobuz both ways and see what you prefer?

There are a few advantages to using Qobuz within the Naim App.

Here’s a summary from our software director in an earlier thread:
When using Chromecast the stream is bit perfect and native upto 192kHz/24bit. The downside of Chromecast + Qobuz is that it’s not really designed to run at such high sample rates. The buffer sizes are far too small (hence prone to drop outs) and the Chromecast stack is very inefficient so uses nearly all the CPU time in the streamer. Not only is this bad for unit response times, but not also great for sound quality as the electric noise floor of the product increases as everything works harder.

For this reason + others, we integrated Qobuz natively into the platform.
Benefits:

Proper buffering - We buffer up to 50MB of data at a time so very robust from internet data fluctuations. The average 16/44.1kHz track is fully loaded within 15secs, hence its playback from RAM buffer.

Efficient - near enough the same as playing a native 192kHz FLAC file from a NAS.

Faster to connect / play / do stuff.

Runs from the internal streamers Play Queue. Once the app has loaded in the play queue the streamer just gets on with it independent from the app / things in the cloud etc.

Overall, I would recommend use Qobuz via the Naim app if possible.

I found this to be true immediately (playing through my Nova.) Qobuz through their app constantly dropped out, and the Naim app totally eliminates that. I settled on Qobuz plus also have Apple Music and stream 100% of my listening.

And gapless playback, you won’t get that with Chromecast

May I ask a supplementary question?

I use legacy equipment (Uniti 2, Muso QB 1st Gen) and I deliver Qobuz to them via Bubble UPNP on a Synology NAS which has been described here and works well for me. However it’s not possible to get the Qobuz programme booklets via that route, as it would be when using Qobuz’s own app. My question is, if I upgraded to current equipment, does the Naim Qobuz app provide access to the programme booklets or not?

It does, sort of. The content is provided by Rovi 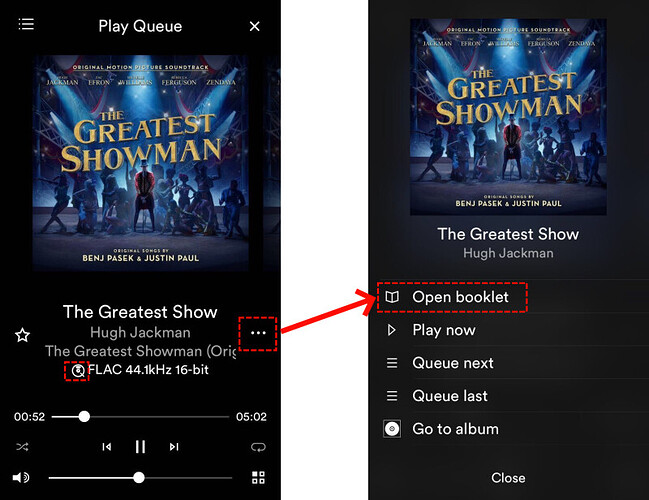 Hi @Andyblain, I’m afraid a fix/solution is not as straightforward as might be imagined. The app interacts with Qobuz via its API (a set of external programmatically available functions - apologies if you know this), requesting the user’s Favourites (Saved) albums, for example. Unfortunately, the API won’t take any ‘sort’ parameter so the albums dataset is returned in the default, Qobuz-defined order DATE_ADDED DESCENDING).
This means we can start displaying the data (asynchronous loading) as it comes in while still pulling down data in the background.
To sort alphabetically would mean waiting for large datasets to be returned in their entirety before a sort could be usefully applied (synchronous loading) - imagine if ‘Abbey Road’, or ‘Adam & The Ants’ were at the bottom of the list.
In short - and I know it sounds like an excuse - when we first integrated Qobuz it was decided on balance to avoid potential grumpiness by a poorly performing sort mechanism. Especially if a sort order was expected on first load.
However, the Qobuz app offers post-load sorting and they may have updated some elements of their API (they seldom tell us - sometimes with scary consequences) so I’ll contact them and see if there’s any viability introducing some kind of sorting in a future release.

This feature is only available on IOS devices is it not? Any reason why it can’t be ported to Android as well?

Don’t forget you can select the Favorites tab in the Naim app where you can sort your favorite albums alphabetically by title or artist. You can also choose Tidal,Qobuz or both together.

Thanks @jsaudio, you’re quite right and it totally slipped my mind. Under Favourites we are indeed loading all content which can then be subsequently sorted. @Andyblain - I was focussing exclusively on the Qobuz browser in my earlier response. While my preference would be a Qobuz API that returns pre-sorted data (and I’ll ask them about it) I’ll look in to applying Favourites-style filter & sort to the Qobuz/TIDAL browsers.

@elverdiblanco: You should see the same Favourites filter and sort functionality in both iOS and Android (see Android screenshots below). 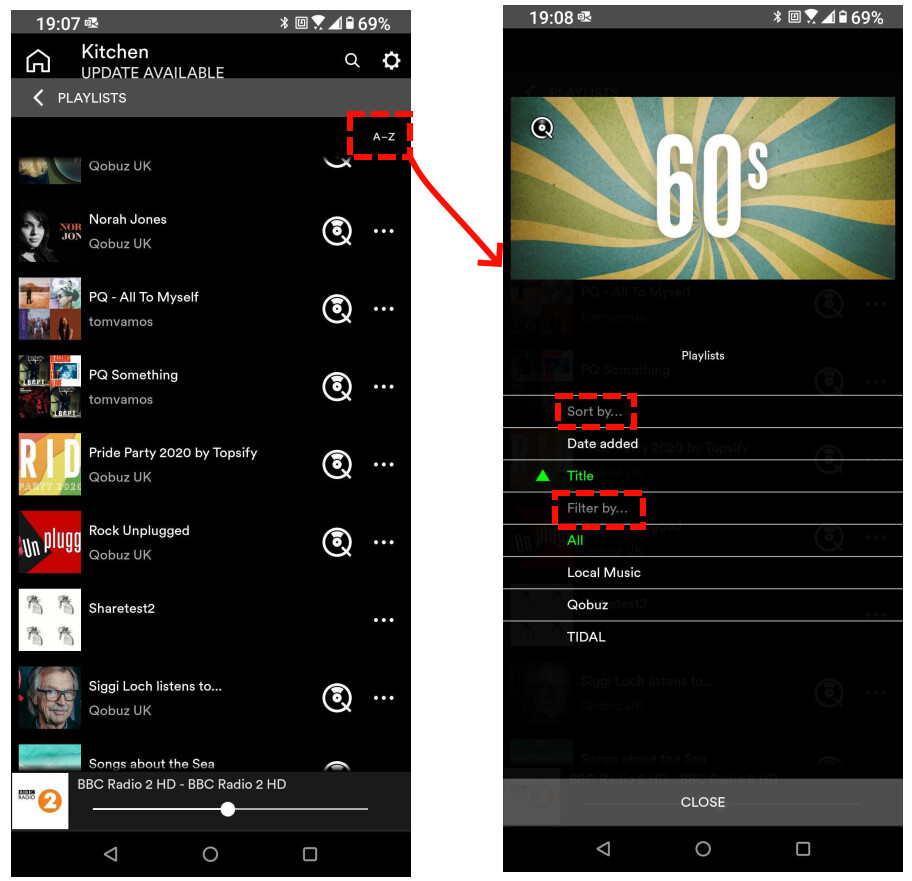 I don’t know if I’m missing something obvious but hopefully you can point me in the right direction? I use an iPad to control the NAIM app. Whilst I have playlists and albums marked as ‘favourites’, I can’t see favourites in any of the menus. Screenshot below - how do I find my favourites? 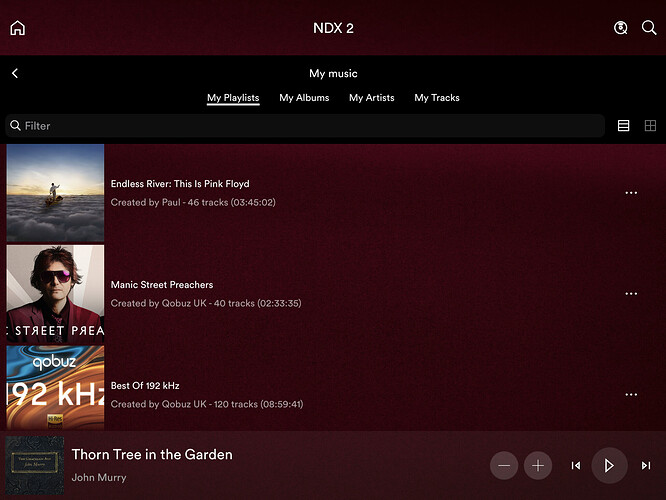 Should be able to go to Home and the Favorites should be an option
Are you on the latest firmware?

Hi @Andyblain, I’m afraid a fix/solution is not as straightforward as might be imagined. The app interacts with Qobuz via its API (a set of external programmatically available functions - apologies if you know this), requesting the user’s Favourites (Saved) albums, for example. Unfortunately, the API won’t take any ‘sort’ parameter so the albums dataset is returned in the default, Qobuz-defined order DATE_ADDED DESCENDING).

Am I missing something? It looks to me as if it sorts my Qobuz album alphabetically just fine:
[Edit: I now see what I was missing from the discussion that followed]]

Thanks, I was about to write that

@elverdiblanco: You should see the same Favourites filter and sort functionality in both iOS and Android (see Android screenshots below).

Yes, but not the Rovi info.

(And by the way, it is difficult to discover that you first have to scroll down to find the hidden More button before you can see the sort options. I was stumped by this for a long time and it never occurred to me that I have to scroll down in the preview (or that what I was seeing was in fact a preview), and I have read and answered quite a few posts on the forum that expressed the same problem, often people simply thinking that sort is impossible)

When I go to the Home Screen, I can’t see any favourites option anywhere. It looks like the app is on the latest firmware version. 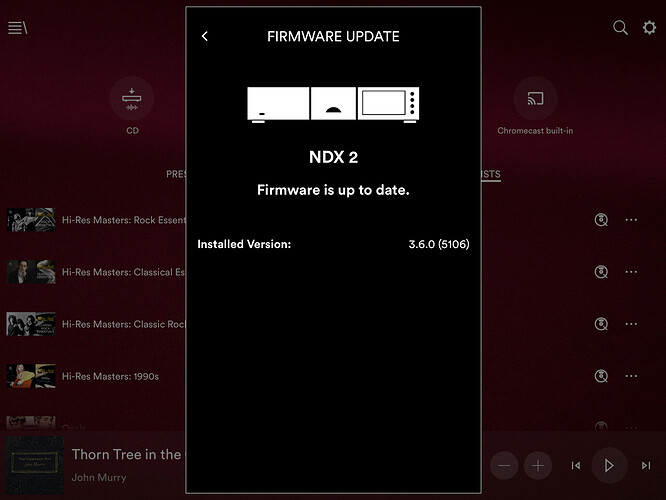 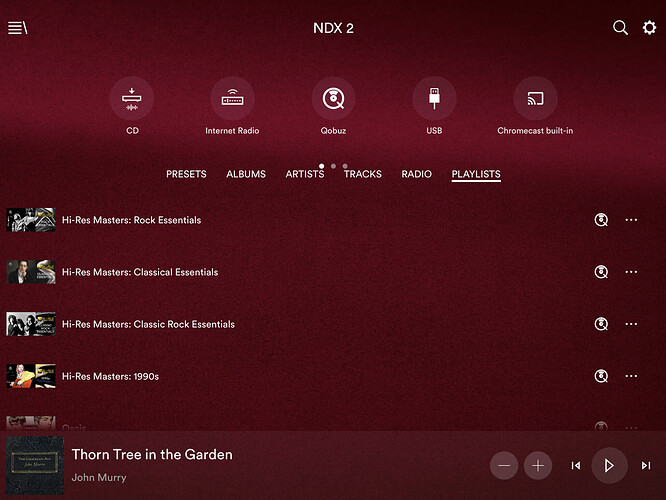 You already are in the Playlist “favorites”, which are not labeled as “Favorites”. Scroll down and press the More button, then there will be the sort options like in @tomvamos’s screenshot, it will say “A-Z”, tap it for other options.

[ @tomvamos, you see what I meant in the previous post about this being difficult to discover? 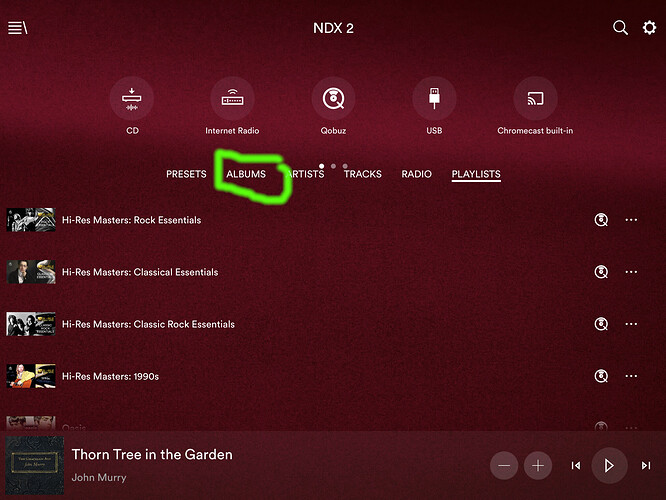 You will then see the album preview. Again, scroll down and press the More button to see all albums, which will reveal the sort options