Vinyl resurgence in a digital world

Apologies if this has been asked before, but recognising the recent resurgence in vinyl, is there much source material these days recorded using analogue processes and if not, what’s the point of buying and using vinyl produced with digital sources? If the tracks have been recorded digitally, inevitably something is lost (almost by definition, sampling is sampling) and just shoving it on vinyl and playing it on a turntable doesn’t mean it’s suddenly analogue. Ta

No, don’t think that has ever been asked before - not on this page, and neither on the broader internet.

what’s the point of buying and using vinyl produced with digital sources?

As far as I’ve been told a vinyl record produced from hires digital files can sound perfect. One advantage is, that the jitter can not be transferred to the lacquers because the cutting stylus is not able to cut the jitter (out of the frequency-range?).
So it’s possible a record cut from a digital file may be preferable to some. It all depends of the rest of the hifi-chain, of course…
Several times a friend of mine, me and also the dealer demoing the nd555 with one PS against a climax LP12 into 500 series and statement amplification into <kudos 808 could hear the merits of the latter. But at this level some prefer the sound and convenience of digital replay - or the sound and ritual/haptic experience of vinyl…
Regards

Never underestimate this, it is a very strong reinforcer of our enjoyment of music in the home. Records have the strongest reinforcement, but so do even cd’s and cassette tapes. For me, this is where streaming, despite its obvious benefits, falls short of physical media.

Absolutley! Some Covers are just a work of Art, and -to me- part of the Oevre and part of the experience… 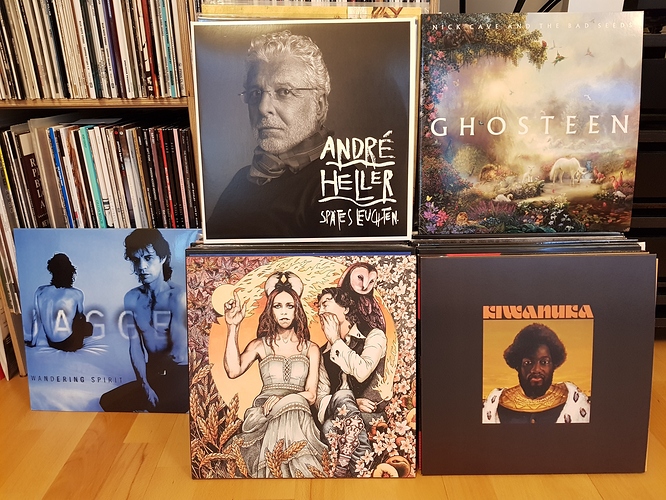 Absolutley! Some Covers are just a work of Art, and -to me- part of the Oevre and part of the experience…

I too find myself enjoying the this-is-art aspect once again. I did miss that after all. The sensory experience of listening to the music AND looking at the art is additive, and missed when (merely) streaming the music. A decently-sized display of the artwork on an iPad does help however whilst streaming. 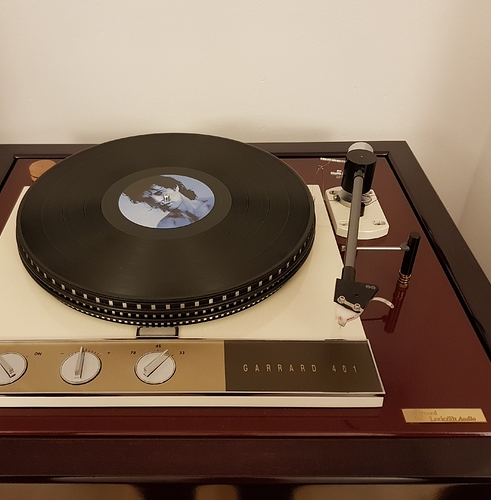 @iPoggy the “recent resurgence” has been going on for 15 years… In fact many would say Vinyl never went away it just took a brief nap.

I often find myself staring at the music app search window not being able to come up with something to play. Almost getting stressed about it. Then I look at my vinyl record collection and directly find something to play. Strange.

That depends on one’s definition of perfect! Unless the recording has narrow dynamic range without deep bass it inevitably will have to be compressed in fitting 20 minutes on a side of an LP; it will gave RIAA pre-emphasis and de-emphasis with any artefacts they may create; it will have surface noise from the disc, even without any imperfections, dust or wear; and the high sensitivity analogue phono stage amplification will introduce electrical noise.

Before all that the digital recording will have been through a DAC to convert to analogue. If the analogue output of the same DAC were played through one’s home listening system it would have none of the imperfections (sorry, character) of the vinyl process.

it would have none of the imperfections (sorry, character) of the vinyl process.

Quite right, but as you mention it, “perfect” was not the right word. - As you can easily see, I’m not a nativ englisch speaker.
It’s an interesting field here, as in analog vs digital photography, the latter will be closer to perfect, but as with vinyl replay, I’m more “touched” by analog replay. But I can see others will prefer the digital presentation and merits (in music replay or fotos).
Maybe it has something to do with the fact, that being an inevitabilly imperfect human being the more “analog world” attracts me more, than the, dare I say, clinical “digital world”.
We are fortunate enough to have the choice!
s

I’d be surprised if anything but a very tiny, if any, percentage of what is pressed on vinyl now is analogue through the entire process. Virtually all modern music is made, recorded and mixed using digital tech and even where someone’s gone out of their way to keep all that analogue they then have to find a cutting engineer that uses analogue gear. And when I say modern, I mean for at least the last 30 years.

Better to focus on the craft of recording, mixing and mastering rather than the technological method.

hat being an inevitabilly imperfect human being the more “analog world” attracts me more, than the, dare I say, clinical “digital world”.

For me digital gets closer to the music that was recorded - which itself was analog and with all the imperfections or inflections of real instrument playing, singing, etc. Nothing clinical about it at all when done through a good DAC that rebuilds the analogue sound. Compared A digital recording played via vinyl is adding imperfections that personally I like not having.

But I fully understand the love of the physicality of vinyl playing, both the album sleeve and the ‘magic’ of the stylus entering the groove and converting wiggles into sound. The album sleeve in particular is something I miss, though for me the benefits of good digital overide that.

It is of course personal choice, not right or wrong.

All that said, if the mastering is different digital can sound worse, many an album having been spoiled by the ‘loudness wars’, severely limiting dynamic range of some digital releases, which probably hasn’t been done with vinyl releases,

Two of my favourite recordings On Every Street and Nothing Like The Sun - we’re digitally recorded but just sound awesome on vinyl.

Donald Flagen / the Nightfly is a good example too. 1982 digital recording.

The analogue coversion from master digital files in the manufacture of a vinyl record is a single process carried out on professional equipment.

Any deviation from perfection is insignificant when you consider:-

I had the 2014 Croz album of David Crosby, one side in 45 rpm. Much better sounding than the 24/96 hirez played through my nds.
It don’t see any imperfections in vinyl replay personally. Far from that.
The only one is when the lp is not in good condition, which gives clicks and pops. It represents maybe 2% of my lps.

Just to add my 2p worth
There’s been a lot of reports from high end demos here recently, that might be the Statement Pre or in a lot more cases the Kudos 808 active which often involved the Statement Pre
Often the sources were ND555 & 2 x 555PS’s and a Klimax LP12 with Superline/ SCap
Those who expressed a preference on the source were almost always with the Linn

At around £55k my vinyl set is still relatively modest

er digital files in the manufacture of a vinyl record is a single process carried out on professional equipment.

Playing a digital file is a single process, though multi-stage. The same applies to cutting a vinyl record: file read from a store, signal down a non-boutique digital cable, DAC feeding at least a signal compressor and RIAA pre-emphasis filter, into a cutting lathe (all through a cables from the likes of Mogami or Canare, not boutique hifi cables, and all powered through bog standard mains cable, plugs and fuses). Of course unless a direct cut disk it is actually a master disk that is cut at that point, from which a stamper is made, and from that copies pressed,

DAC is manufacture dependant, a Naim DAC will sound different to a sugden DAC. Both can’t be perfect.

As for replay, many of the variables you mention for digital can be eliminated by not streaming across a network, or using a streamer/DAC not sensitive to the RF or other electrical noise that “sub optimal” components inject or transmit. As you suggest the sound does indeed depend hugely on the DAC, as I also had alluded- and whilst it may or may not be “perfect”, nor may be turntable, arm, cartridge and phono stage of a record playing system which the vinyl recording goes through.

The rest of the system is irrelevant as it is common to vinyl or digital.

So in practice digiral replay can be minimised to the point where the difference is the renderer and DAC in your system, vs the DAC and an awful lot more including some non-reversible changes via the vinyl medium…

I don’t doubt that vinyl can sound very good, especially with very costly replay equipment, but in particular when taken from a digital recording it has more unavoidable inherent limitations.

Against that, some digital recording are mastered for digital release very poorly, artificially limiting the quality of the medium…

Playing a digital file is a single process, though multi-stage. The same applies to cutting a vinyl record: file read from a store, signal down a non-boutique digital cable, DAC feeding at least a signal compressor and RIAA pre-emphasis filter, into a cutting lathe (all through a cables from the likes of Mogami or Canare, not boutique hifi cables, and all powered through bog standard mains cable, plugs and fuses). Of course unless a direct cut disk it is actually a master disk that is cut at that point, from which a stamper is made, and from that copies pressed,

Any inaccuracy or imperfection produced when cutting a vinyl record from a digital master is just another imperfection amongst many others, it’s not as though everything else is perfect. As you pointed out the turntable, arm, cartridge and phono stage all produce inaccuracies.

With regards to the use of non boutique cables and bog standard mains cable, plugs and fuses. I assume the likes of Jimi Hendrix used similar, when they recorded music onto analogue tape machines in the 60’s.