I thought I’d post this separately, rather than confusing the ‘your watch and Naim’ thread.

Towards the end of last year I bought one of the new Oris Big Crown Pointer Date watches, which uses their new in house movement.

When it’s on the winder it keeps pretty much perfect time, over say a week. But when I wear it, it gains at least 30 seconds a day.

I’ve done some research and it seems that the most common reasons for gaining time are incorrect adjustment, or the watch has been magnetised. What’s confusing is that if I wear it for say four days it will gain a couple of minutes. If I then reset the time and put in in the winder, it’s perfect again. Surely if it was incorrectly adjusted, or magnetised, it would still run fast on the winder.

Obviously it’s under guarantee as it was bought new, and the seller has said I can send it back for checking, but my fear is that they find it’s fine and send it back unchanged.

Being retired, a couple of minutes are neither here nor there, and it would do me good to get to appointments early rather than late, but that’s not really the point.

I have two other mechanical watches, both of which are absolutely fine, both in the winder and on my wrist. It’s therefore a bit of a mystery. If I’d discovered this in the first 30 days I’d have sent it back, but that’s no longer possible. Any ideas?

All I can think of is while you are wearing it is in proximity to other stuff e.g. electronics in the car, phone etc but obviously not in the winder.
Could you get your other half to wear it and see what happens?

But as HH say, I thought once magnetised that was it. So it seems that it still runs fine in the wonder.

I’d be inclined to get it adjusted to run accurately under normal wear. Or just get a service

It’s only four months old and I should have paid closer attending to what it was doing in the 30 day return window. I do like the idea of Mrs HH wearing it for a few days to see what happens. I can test for magnetism if I can find the compass!

Seems unlikely but - temperature? It will be warmer on your wrist. But I thought that temperature compensation had been pretty much standard in watch movements for many years…
Attitude? Again, unlikely these days, but watches used to be sensitive to whether they are lying horizontally or vertically, and which way is up. Watches should have suitable compensation, but I suppose that might be a possibility.

If I’d discovered this in the first 30 days I’d have sent it back, but that’s no longer possible. Any ideas?

It sounds like it’s faulty to me. So, surely the 30 day limit won’t apply.

Maybe you could invest in this. Or similar. 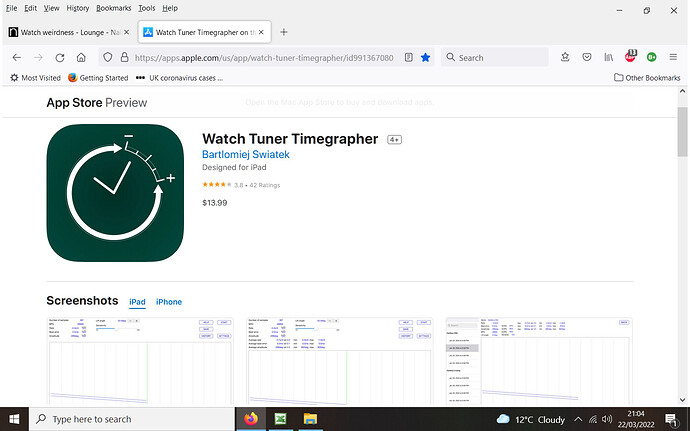 I’d have spotted that straight away.

Another few things to try:-
take it off the winder and leave it on a desk. What happens (other than it running down)?
Try it in different positions - upside down, on the crown, with the crown uppermost, etc.
Wear it on your other wrist - what does it do now
?
Each of the above will need to be done over at least a day for each test.

Don’t use the winder - do a manual wind - try 20 winds, then when you’ve seen how that affects it, go to 40 winds - the degree it’s been wound to matters. again this will take days.

I’ve got an Omega Aqua Terra that can be accurate to 0 seconds over a week, but then will start to run 2 seconds (or more) a day fast for no obvious reason. I once wore it 18 hours a day for a month and it gained/lost nothing.

I also find that if I wear it around 14 hours and put it on the desk for 10 it’ll run slow on my wrist, but gain when off giving the 0 seconds over a day.

My Seamaster 300 and Tudor Back Bay both vary in their gain over a day/longer depending on how I sit them on the desk. Yours does seem excessive though, especially as it’s fine on a winder (by the way, which winder do you have and would you recommend it ?).

Have you tried wearing it on the other wrist ?
Could be a side issue ?
Maybe a left handed version ?

Thanks, lots of good ideas there. 30 seconds is certainly a lot, and on occasion it’s been more. The winder is a Wolf Cub, which works really well and is nice and small. It’s just odd that it’s fine on the winder yet so different when worn.

Not sure whether or not it might apply to your Oris, but when I bought my Submariner, the Rolex agent had me fill out a questionnaire, and among the things covered were “which wrist, inside or outside of the the wrist, and did I take it off a night, or wore it 24 / 7”.

They reckoned they could do some fine tuning, based on the answers.

Might be worth a chat with either Oris or the jeweller who supplied it.

Yes, keeping slightly different time with proportion of time on the wrist, or pattern of wear (how active), is I believe normal? Ideally it should be set to keep the best time if worn regularly daily and off during night - my Tudor GMT almost never needs any correction when worn this way but starts gaining a few seconds if left just sitting.

If your watch runs ok while in the winder it may actually be perfectly well set (as the winder is supposed to reproduce a “normal” wear pattern) and depending on the actual daily use and amount of daily activity with the watch on it may be behaving closer to when worn less or more? So it might be a matter of just asking Oris to check and/or adjust more to your wear style? I guess if it’s within whatever they would call tolerance, they might say it’s fine…

Thanks. It’s been on the winder for four or five days and lost 20 seconds. I’ve reset the time, manually wound it and put it on the bedside table to keep and eye on it. I’m confined to the house with Covid so at least this gives me something to think about! I tried putting it on the compass to check whether it’s become magnetised, which it hasn’t, so that’s another thing ruled out. The new Oris 493 movement is supposed to be pretty good, so it’s odd this is happening.

Are you sure that it has nothing to do with your magnetic personality?..

Seriously, why not get a nice light weight quartz watch? You replace a battery once every two years and enjoy an unmatched accuracy all the time?

This is very weird indeed. Temperature was the first variable I thought of too.

Maybe some other daily activity like holding the handlebars of a motorcycle/scooter/bicycle that causes the watch to rattle around on your wrist?

Last night I took it out of the winder and left it on the bedside table. In 7 hours it’s gained 25 seconds. Yet, on the winder it’s ok. It looks like it’s going to have to go back for checking.

If you do send it back, make sure you take some photos to record the condition of the watch.
I have a porcelain dialled seiko that was losing 4 minutes a day, i sent it back and the service centre claimed it had been dropped due to the damage on the case! I had never dropped the watch and the case back was scratched but both the retailer and service centre denied responsibility.

Is the watch sold as a "chronometer ? If so that’s def. out of spec. If not +/-30seconds is usually what is specified so you may have a bit of an argument but I’d still expect an examination/repair without question from the dealer as it’s not consistent.

@RvL Modern watches (or those I’ve seen/know about/own) should cope with “normal wearing” - so riding a bike, etc should be considered normal. Perhaps if you use a pneumatic drill continually you’d be wise to take it off first

@Haim It’s just not the same; trust me - my first “real” watch was a quartz Seamaster. For the 20 years I owned it I always hankered after the automatic - finally traded it in 3 weeks ago and am pleased as punch. No longer does it cost £140 for a battery change every 2 years (though it needs servicing every 5-8 years so they still get their money

) Just watching the mechanism is intoxicating and a good way of just easing up and calming down when modern life strikes again. There’s also that warm feeling that you’ve got such a precision instrument on your wrist that just isn’t the same.

The winder is a Wolf Cub, which works really well and is nice and small.

Thanks for this - I’ve been looking for a winder, but have no idea what I’m buying so a recommendation from someone trustworthy is really helpful. Not only that, it’s within my budget