Well that was unfortunate 😞

Unfortunately last night my 1 year old little girl accidentally tripped on the rug in our living room and knocked over one of the speakers.
Thankfully she is absolutely fine but not so for the speaker!
This is now going through my insurance and they have told me it won’t be repaired and they will be crediting me with the full list valve of the speakers.

My dilemma now is having had this happen as much as I love them on reflection they aren’t the most stable/planted speakers (Totem Sky Towers).
When auditioning last year they blew everything away and my sole focus was on sound. Stupidly I didn’t really think about 3 feet vs 4 and weight.
The Totems only weighs 10kg so this combined with its 3 feet means delicate.

So now the search for some new speakers shall begin, never thought I’d be doing this so soon!
Ideally something heavy and on 4 stable feet!

My Verity Audios are 78 kilo’s a piece, and I guess there are many more speaker with a considerable weight. However you really have to consider it…, I fear your daughter might hurt herself quite badly if she would hit my speakers with her head in a bad way…, another aspect while the weight might be ok…, the soft speaker parts might get damaged. So I guess I am arguing that you perhaps should treat it as a one off bad lunch and get the same replacement, and pray it doesn’t happen again…

I really glad your precious daughter is fine, that is all that matters @popeye.

Bookshelves may be an option and Totem do some cool looking wall mounted speakers in the Tower styling, like the Tribe II.

It is unfortunate, the grills stay on all the time and in all honesty she doesn’t pay them any attention.
With the replacement whatever it is, I will now make a habit of pushing them right back against the wall when the system isn’t being used.

Most standard speakers seem to be around 22-25kg obviously it depends on the speaker.

what is the actual damage, is it just cosmetic? have you considered the impact on your house policy if you claim?

Ideally something heavy and on 4 stable feet!

Or Shahinians on casters. Well worth auditioning, especially if you listen to lots of live music.

have you considered the impact on your house policy if you claim?

This is well worth checking. One of our granddaughters broke a lens on my wife’s very expensive glasses and the increase in premium at the next renewal of our house contents insurance was four times larger than the payout after deduction of the excess from my claim.

Back in the days of the early 90’s I bought a pair of ex demo Heybrook Sextet speakers for a bargain. Problem was one of the speakers had fallen over in the shop resulting in a nice chunky gouge out of the the walnut trim. That didn’t put me off as they were wonderful speakers.

Called the local French polisher and he came round, built up the dent and painted in the walnut marbling. Walked in the room and I could not see the damage at all - perfect match. Then the cost £10 ! so I gave him £20 and we were both extremely happy.

Both, cosmetic and the driver effected and where the banana plugs go in the terminals because they were ripped out and bent, it’s ovaled the terminals and they are very loose.

This is an interesting one as following the thread that is currently running on insurance It is obvious I am paying an absolute fortune compared with everyone else so will be looking to leave anyhow next year.

Have you spoken to your dealer/the UK distributor as it could be some elements could be fixed quite cheaply e.g. terminals and drivers - assuming you are accepting of the cosmetics.

It’s the jarring within that would concern me, the internal bracing, how the crossover is mounted, many factors.
And as I say it’s not very stable so it’s definitely the right thing to do and get something more suitable.

that’s what i initially would do…

Unfortunately even if you ring them, discuss, then not claim…some(all) put it down as a claim against the policy, and hit you next year.

@Gazza you’re right - they are like the Candian Mounties they always get their man - one way or another.

Yes that was my thought when you mentioned insurance. I’d be very wary about claiming for this on home insurance as you’ll almost certainly end up paying more in uplifted premiums than if you get the speaker repaired or buy a new equivalent pair yourself.
As others have said the main thing is that your little girl is ok

Indeed, and when taking out a new policy, you are likely to be asked if you have any previous losses, regardless of whether or not you have made a claim.

SBL’s could be viable. Reasonably inexpensive and need to go against the wall.

Given the insurance payout and your old speakers will have value you would turn a profit and could lad some SBL’s and put the difference towards a used XPS DR!

I use Kudos S20’s and these work well pretty close to a wall, C20’s are similar in this respect and very capable.

If you want to hear S20’s I’m in East Dorset and welcome to visit.

Well it’s done now and how i opted to do it, I have never claimed so I could never comment how much it will effect my premiums.
However I have claimed many times on car insurance over the years and over the years my public liability that I hold having my own company. These have never made a considerable difference and fundamentally it is the whole reason we have such insurance.

I had a pair of those a superb speaker mine were in Maple the fit and finish was truly outstanding.

@pcd I still have them gathering dust. Just had a look and still can’t see where the dent was. Ah it could be maple rather than walnut. 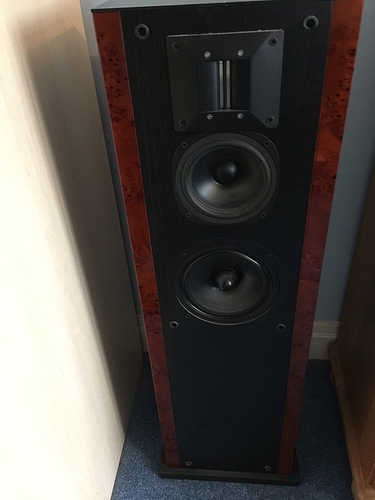