What a pile of drivel...The Brits

Am I missing something?

You’re missing the ODI from Barbados.

Bit racist, me thinks. Nothing wrong with the Brits. Lovely People!

Yet another pointless industry backslapping waste of time…like all award ceremonies.

I have the system on, who gives a f**k about the Brits

You’re missing the ODI from Barbados.

Lucky you - I had to turn the system off for SWMBO to watch the Brits!

Lucky you - I had to turn the system off for SWMBO to watch the Brits!

It’s a grea5 match! I reckon we will win

Nobody shoots them better than Martin Parr: 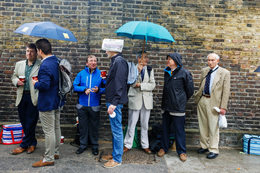 Surreal. Mine is at home!

Looking good, Roy’s in great nick. At half time I was worried we’d collapse.

It’s a cracking batting pitch, I reckon Roy could get a double here

With the near stumping I started writing we nearly jinxed him, and had time to change it as he got out to the next ball. Root needs to kick in now, he’s coming off a fast ton in the warmup, he’s been able to play the anchor and farm the strike to Roy, he’s the set man now.

Magnificent run chase in the WIndies though! Well done to everyone involved

Sorry Alley Cat, I think PB and I rather diverted your thread.