What gin are you drinking, and why might someone else enjoy it?

There are threads on whisky, wine and beer, but not one (or at least not current) on gin.

I drank gin a bit when I was, erm, about 15-16, standard pub fare (Gordons or Booths), drinking it with lime (undiluted cordial) until after my English Language ‘O’ Level exam (at least I think it was that one), when I got very drunk on it, sleeping it off that afternoon on a park bench…. From that day onwards I didn’t like gin at all. Until 2019:

On holiday with extended family in Spain, others were drinking and enjoying Tanqueray Seville Orange gin with tonic (Fevertree light.) It looked nice, and I had a sip - liked it and had a glass…and another…and more on the following days.

I then tried other gins, and various tonics, and found some very enjoyable ones! Only one other orange gin was worthy of having again after the first bottle, but then I branched into other gins and found a number that I particularly liked, and maintain as a stock in the gin cupboard to savour when I fancy. But more of those another time: this evening I’ve had one of those original Tanquerays, so that will set the ball rolling for this thread… 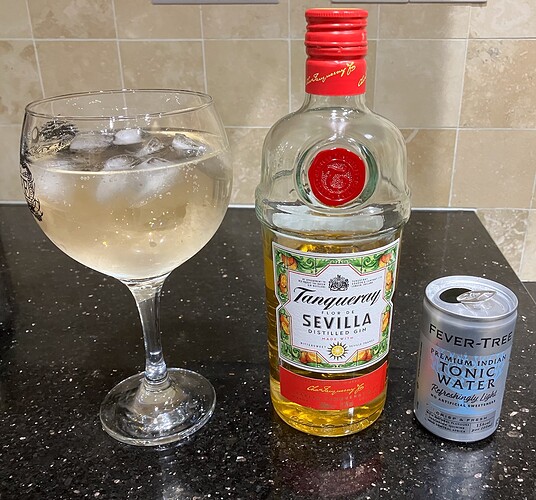 Distinct and real orange taste, and on the sweet side which complements the orange. Very drinkable - but not very gin-like - indeed although a legal requirement for a characterising juniper flavour I don’t really pick it up in this drink (1:3 gin: tonic). Perhaps that’s why I liked it when I first tried, but it re-introduced me to gin, and led to many more where I can taste the juniper. However I still don’t like Gordons. Hayman’s is a family-owned distillery here in Balham. I drink their gins all the time, with “Exotic Citrus” a particular favourite. 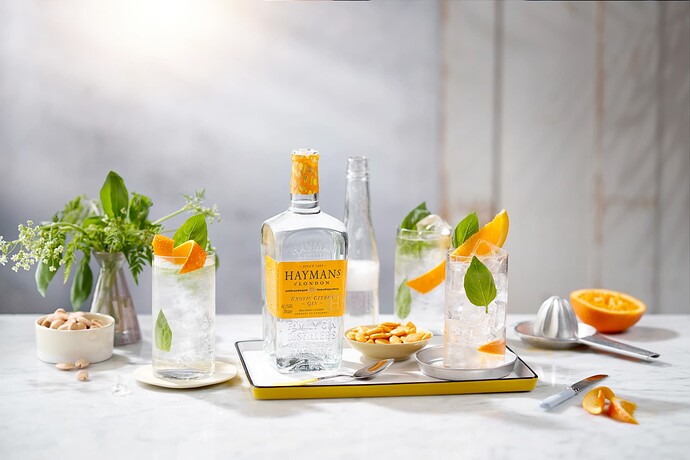 @MrM I do fancy trying The Botanist, the distiller’s description making it sound good - how would you describe it?

@TheKevster, I’ve not come across that one - hardly surprising of course as ther anre many thousands of gins and local ones don’t often reach much further afield. I tried all the orange ones I came across after first being hooked by Tanqueray, the Whitley Neil one being one I recall finding disappointing, and one by Chase being the only other I liked. have you tried other orange ons, in particular those I just named, and if so how would you say the Haymans one compares?

I don’t usually add anything other than plain tonic to the orange ones due to the distinct orangeness already there - but some orange, or clemantine, zest in many gins I find beneficial.

My number one for some time now:
No 3, Berry Bros & Rudd 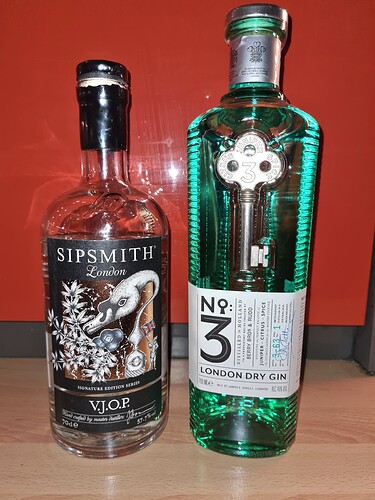 Any idea what VJOP stands for? I’m familiar with VSOP, but that is different! And neither old nor pale normally make sense with gin, not normally aged, and with no colour pale is meaningless!

Very Junipery Over Proof, remember he said it’s 57.5%, and they use double the amount of juniper.

Botanist is a firm favourite, complex and balanced perhaps a way of describing it? There’s multiple taste layers to it, usually well received by guests and those liking a gin based drink.
Mermaid is another, mainly due to connections with those making it and it coming from my place of origin of the Isle of Wight!

Hayman’s Exotic isn’t orange – it’s kumquat, pomelo, Persian lime and mandarin, and is absolutely delicious. You can get it easily, either online or at Waitrose.

Of the purely orange gins, Malfy blood orange from Italy is my favourite: 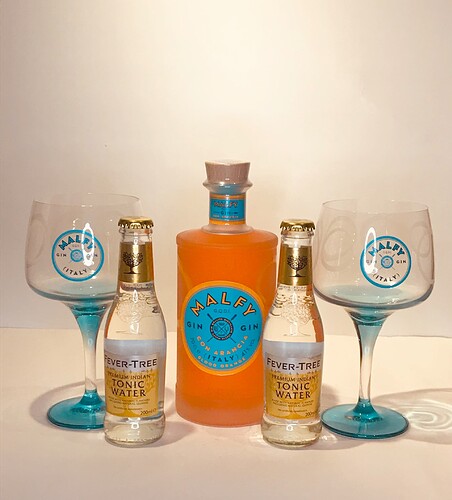 But their Sicilian pink grapefruit gin is even yummier! 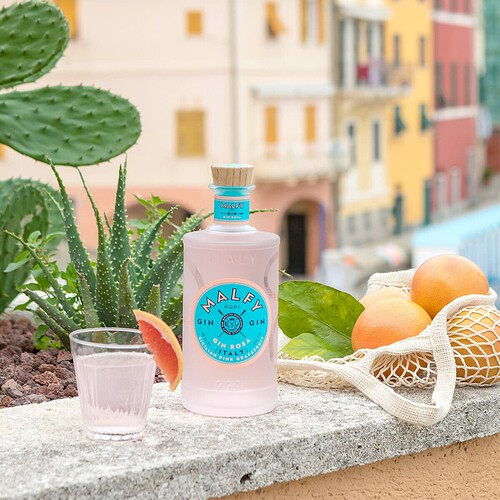 When I first found the (derelict) Thamesside warehouse that was soon to be converted into my riverside home in Limehouse in London’s East End, it smelled delightful, as it had been used for decades to store fresh juniper berries for use in gin (I can’t remember now which distillery). Sadly, the aroma faded with all the building and cleaning works that were necessary to turn it into a home. Heavily junipered with half a distilled pine tree in each bottle.
Unique and now my very favourite. Often found in Asda for £20.00 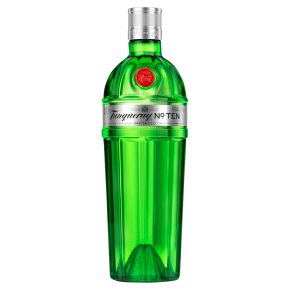 Wonderful taste of grapefruit comes through the ‘botanicals’ . 47% so take care. Often on offer.

All with Fevertree Original tonic. Perhaps a slice of lime or lemon. Nightly un iced in the colder months.

About a week ago, I experimented with making (what I’ve decided to call) Christmas Spiced Gin.

To a few hundred ml of decent-ish supermarket gin, I added:

Tried some as a G&T last night and it was surprisingly well-flavoured. Next step is to make a larger batch. 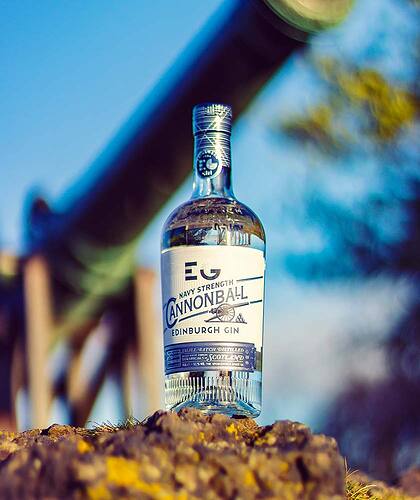 Cannonball navy strength.
Nice simply sipped with ice or as a mean G&T.

Best simply sipped with ice, gets a bit wish washy with tonic. Or use with soda water.

My go to gins are The Botanist (occasionally drink it neat) and Tanqueray Rangpur Lime. The latter is quite subtle in my experience of flavoured gins.

Best simply sipped with ice, gets a bit wish washy with tonic.

That’s my view on Bombay as well, I love the subtle aromatics from it and I find they’re completely swamped by tonic, so with a dash of water or on the rocks for me.

After extensive ‘Gin Taste Off’ sessions with gins from around the world, our tastes considered the following the ‘No. 1’, esp with Walter Gregor’s tonic (with ice, no lemon). 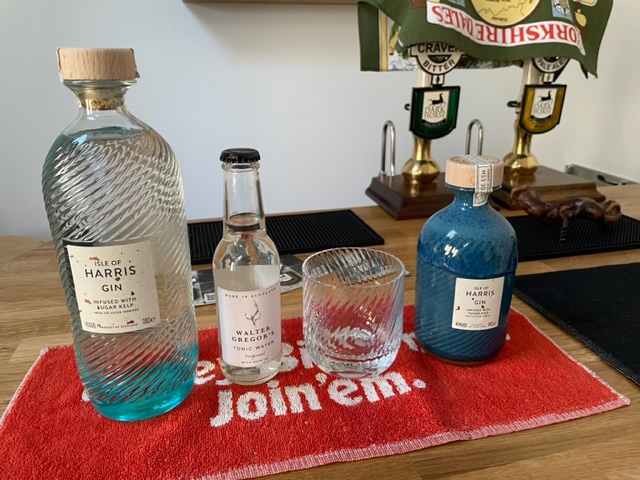 Interestingly unlike some I’m not keen on the taste of Bombay Sapphire, though it is drinkable with a strongly flavoured tonic like FeverTree Aromatic.

Incidentally, whilst some gins are nice neat, if I fancy a neat spirit, I am far more likely to go for a malt whisky, or sometimes a well aged Cognac or Armagnac, never withice, and save the gin for refreshing G&Ts as a long iced drink.

I have to confess that I’m not a fan of the current vogue for ‘flavoured’ gins but each to their own. My house gin is straightforward Tanqueray gin which is a very reasonably priced high quality gin.
2 other shoutouts:

A big +1 for Beefeater - my brother-in-law was amazed a couple of weeks ago when I told him the G&T I made for him was made with Beefeater. Based on taste alone, he was assuming it was something much more exotic.

I think Beefeater gets overlooked precisely because it is (or has been) so prevalent. Rather like I remember everyone having a bottle of Gordon’s in their drinks cabinet in the 70s/80s, the same was sometimes true for Beefeater so, in my mind, I know I’ve often mentally tarred them with the same brush.