What’s your favourite pudding and why?

This is borrowed from Dom Jolly’s FB page. He disagrees with the ranking - so do I.
My favourite pudding is Summer Pudding; I have two reasons: first, it’s quintessentially a taste of an English summer, and second it’s a good excuse to open a desert wine. 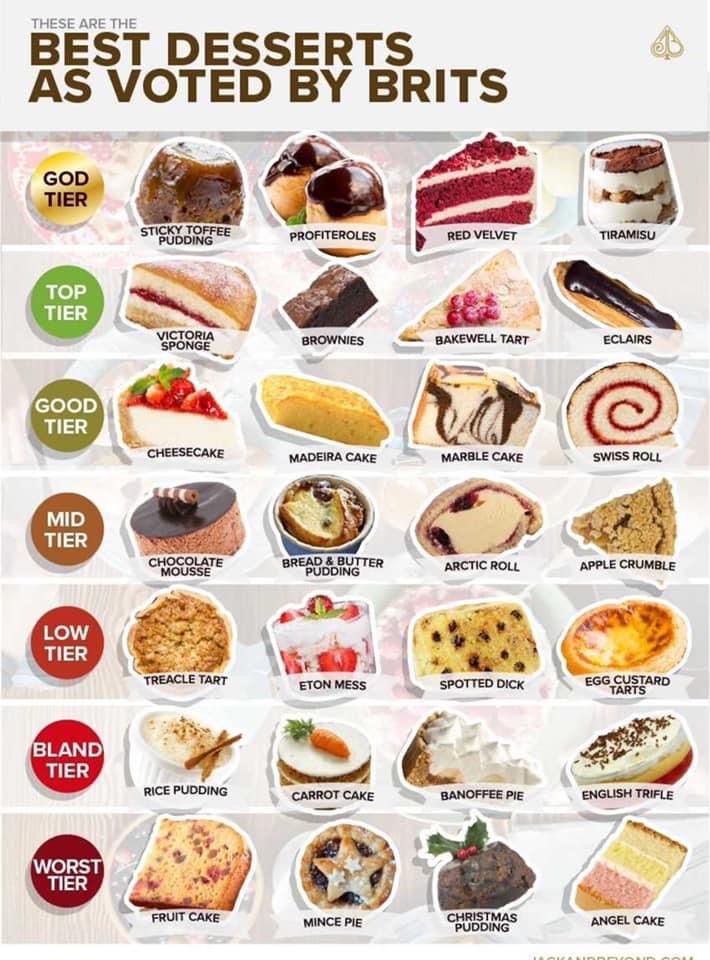 Good old fashioned sherry trifle is hard to beat and easy make. I assume they still produce the trifle sponges that were 5x2x1 inches and quite dry ready to absorb lots of Bristol Cream Sherry. My mother was good with puddings - we were spoilt. You name it and could make it to perfection with top quality ingredients.

My father ran a dairy supplying locally produced milk in the bottle. None of this homogenised stuff were you can’t see the cream line and colour. It all passed the sniff test and if it didn’t it went to Cadbury’s for testing and processing into the biscuit form. Dad’s cream was made from the best milk and was completely natural unlike modern stuff - a proper accompaniment for English puddings or ingredient for many others.

The best puddings for me are anything with custard poured over…apple pie, fruit crumble, chocolate sponge etc…aaahhh sheer delight!!!

Cake isn’t a dessert, it’s just cake! It belongs in a different list. The fruit cake in that picture doesn’t belong in any list, look at the colour of it.
If I had to choose my own top tier out of those, maybe Tiramisu, Bakewell, Eton Mess and Trifle.

Cheese, then out into the sand dunes? Sounds intriguing. Personally, I follow up my cheese course with pudding.

Here is a pudding that some older and wiser people may be familier with.

Just this weekend, the family visited the In-Laws and my wife requested a pudding she had not eaten for donkies years. Her mother kindly obliged and we were served Sago.

It was the first time I had eaten it and it was delicious with raspberry sauce. It is basically made by boiling pearl sago and sugar in milk until the sago pearls become clear, and thickening it with eggs or cornflour.

Here is a picture of before and after, before on the right. 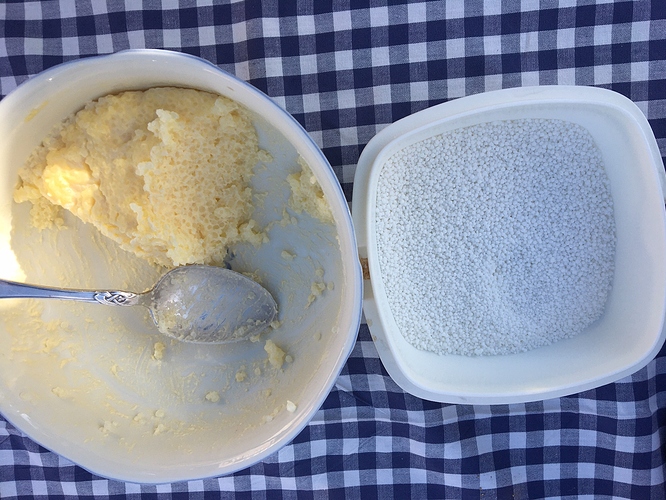 And with the sauce. 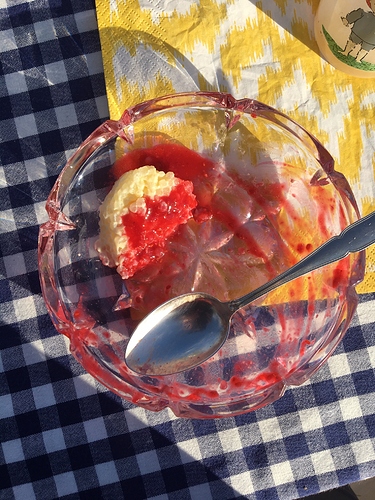 I was really surprised how good it tasted…clearly a pudding gone out of fashion but requires a come back in lockdown times.

That’s one of the best menus I have ever seen

Sticking to the title, when eating out it’s usually Sticky Toffee Pudding. Only if it’s done properly, big tray bake rather than commercial single portions. Strangely, I do not like the one that is sold as the “original”. Usually with ice cream.
Next, and I had it tonight, Christmas Pudding.

Well, I’m not a pudding aficionados and usually give it a miss, passing straight onto the cheese. But …

… based on that list it would be apple (or rather fruit) crumble or, better still, apple & blackberry pie, with a thin pouring of cream.

A chocolate brownie might make me postpone the cheese for 10 minutes or so.

Yes, that is a serious omission to the list.

Thick custard with almost anything is a winner, but roly-poly definitely comes top of the tree!

For me Tart Tatin still can’t be beat from France, or Italain Panna Cota, got to be British Triffle

Sago pudding - not had it for years. I used to love it as a kid (50 years ago!). One of my dear old mothers standards. I must seek out some sago at the local stores asap. Excellent choice @JOF

It really was very good.

I don’t remember anyone at school liking frog spawn, aka sago.

It should be on your list…scandalous I say.

Same here, the school version must rank as one of the most repulsive foods ever. Perhaps it’s better if prepared with a bit of TLC, but to me it was just one of those character building things you had to face at school.