What speakers do you use with your NAP 300?

Trying to get a feel for the speakers used with the NAP 300.

Ideally with a little bit of information about (any) previous speaker and any specific setup features (e.g. distance from walls), any exceptional areas (e.g. smooth treble) and unexceptionable areas (e.g. boomy bass) etc.

They are quite equilibrated in my set up. The bass is not boomy, quite controlled.

I had them with a NAP250 previously. They already worked great.

NAP300 for 3 years but just recently upgraded to NAP500.
Sopra -3 in a 17X25 foot room with vaulted ceiling.
Speaker drivers are 5 feet from front wall firing down the long length.
7.5 feet apart.
Carpeted suspended floor
No acoustic treatments other than curtains behind speakers
SQ is excellent. No bass boom even with NAP500. Midrange is excellent. No toe in to tame the beryllium tweeter. Had Sopra-2 prior, felt the 3s might be more appropriate for rather large room

Using B&W 805d3 prestige editions, with Kudos ks1 cables, on Dreadnought stands with atabites. In an open plan lounge / kitchen, with high vaulted ceiling. I had a Nap250, but the 300 I have now makes the speakers ‘bigger’ with weightier bass. I feel the 300 can give more power but the standmount speakers can handle the 300 really well too - they both work together well.
Next steps for improvement I think would be to get the kit out from between the speakers - it is quite bassy between them, and a dedicated ring main. Hence I don’t think either speakers or 300 deserve to be changed until I’ve wrung some extra potential out of them.
This feedback is from prime listening seat, around the room they play the music but it doesn’t seem like the sound quality is anything major.

About 6.5 feet apart shooting down the longer length of the room. A fair bit of distance (50-odd inches) from the wall. Minimal toe-in.

I also use them with the Gaia isolators in place of Dynaudio spikes.

my room is fairly small - the speakers are placed 4ft apart, 1.2 ft from ft from back wall, with a slight toe in to my lisening position which is 8ft away

dont have any boomy base, clear and very well difined - mid has drive and clarity, top end is lovely 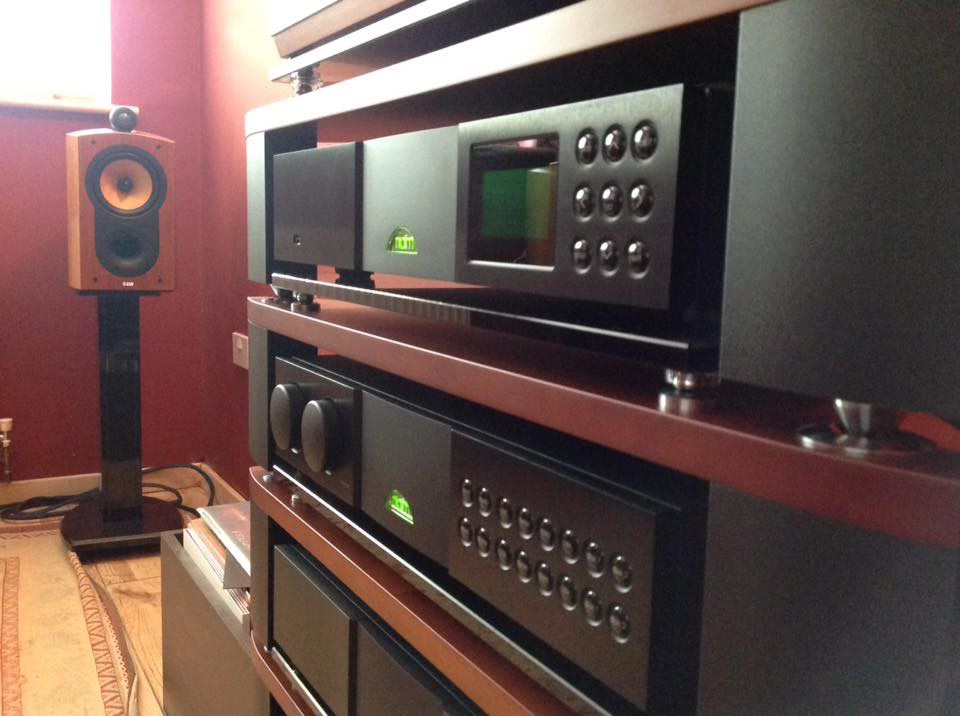 I used Neat MFS for many years, a speaker I believe still punches well above its weight. A superb match for the 300 and only changed because the system ended up in a much bigger room, 6m x 11.4m.

Now using Magico S3mk2. These are in another league to the Neats but although the 300 drives them well, I know they have much more to give so I plan to swap the 300 for a 500 in the next couple of years.

Firing down the length of the room, both speakers ended up in similar positions, around 2.38m from the front wall and 1.68 from side walls. 2.65 apart and I sit 2.75 away. All measured to the centre line of the front baffle.

In both cases, a little toe in but not aimed at the listener, the Mágicos more toed in than the Neats.

My ceiling is irregular, lowest in the corners behind the speakers (1.3m) and highest in the middle of the room (3m). Flat concrete construction with an open, descending stairway. The irregularity is beneficial, as is the size of the room but RT is greater than I would like and am working with GIK on treatment options. The need to treat seems more obvious with the Mágicos than it did with the Neats. That said, we will be reducing the 11.4m length to around 7.6m soon (adding a bedroom/office) so that may completely change the character of the room…

PMC Fact 12s doing great service for several years now. I have owned three sets of PMC speakers as I have worked through my upgrade path. The front-firing ports work well in my room. Several Fact 12 owners on this forum say they work even better with a NAP 500, so that is my next upgrade but no timeframe for that yet.

The back of the speakers are 16cm from the rear wall, no bass boom and they sound very balanced to me.

I changed from a 250DR a few weeks ago which has transformed them. The bass goes deeper than I could have wished for with great control. The S20’s have a reputation for being bright but I don’t experience this now with the level of electronics I have. I understand Kudos use the NAP300 as their reference when developing their speakers.

Are you unhappy with your SL2’s?

Are you unhappy with your SL2’s?

My plan for 2021 is to try some alternatives.
More of an itch to scratch rather than any specific “unhappiness”.

Demoing speakers in ROI is a frustrating experience with the very limited amount of brands readily available. I wish someone here stocked Proac, Kudos, Neat and a few others.

I’ve used Focal Sopra 2s with mine to very great effect and with Spendor 9.2s since November. The Spendors are very well suited to classical and jazz which suits me perfectly and look nicer in the room - according to my family! The family likes the fact that they are only made 36 miles away from away - seems to matter to some!

When I had my 500 DRd my dealer loaned me their 300DR demo driving my B & W 802s. No problem in my average size room, 13’ x 18’. Speakers 1’ away from rear wall and 2’ from each side wall, between fireplace. Wooden suspended floor with large rug. Superlumina LS cables.

This seems to becoming a common theme among SL2 forum users…

SL2’s in their natural home of, hard up against an external brick wall.
Before I was lucky enough to find a pair I listened to, and enjoyed, various Kudos models, but mine are going nowhere unless I everything that is currently feeding them is upgraded to 500 series, so going nowhere

I went from SBLs to SL2s with a single non dr 300 two and a half year ago, then went active and dr’d both 300s but have recently traded the active bits (plus a “few” quid

808s on a single 300dr beat SL2s active with 2x300dr by quite a margin but you might well hope that would be the case at what they cost. Swapped to 500dr from 300 and that brings another major lift

Neat Ultimatum XLS on Track Audio stands. 18 inches from rear wall, 4ft 4 inches from side wall, 8ft 4 inches apart and the listening position is 8ft 6 inches. Since getting the WH Morgana for the NAP 300 back in June the speakers were moved about 8 inches further apart. Improved the soundstage considerably.