What would you do next?

Recently upgraded my system, adding a ND5 XS2, Hi-Cap DR and Hi-Line which I’ve been enjoying a lot. But, as with all things Hi-Fi, thinking about the future and which directions to take and wondered, what would others do next if in my position.

Current room is my office, small… around 12" x 10". Made smaller by sacrificing 18" of space behind speakers, units etc. Limited space but the 4ft near field listening triangle is providing great soundstage / imaging so far.

Option 1
Upgrade to a NDX2

Option 2
Keep ND5 XS2 and add a separate DAC, such as a Chord Qutest or maybe Hugo TT2.

Option 4
You tell me

Anyway… as part of the fun is planning future changes, thought I’d see what others would do based on what I currently have while trying to keep a good balance across the system. Cheers

How are you finding the new TQ Silver compared to the Black?

Too early to say at the moment as they’re still burning in.

When I spoke to the supplier I said I was looking for a cable that will provide great clarity, detail… especially around the mid / highs but without sounding harsh or fatiguing. The Chord Epic X were mentioned but they said on B&W speakers, they found the TQ Silver to be great and use them on some B&W floorstanders.

So far they sound good but, I’ll wait a week or so before making a comparison. I had the mk1 blacks before these.

Speakers certainly look like the weak link there so maybe the 805 D3 as you suggest but the PMC twenty5.22 is certainly worth looking at too, they’re the speakers I have and sound mighty sweet on the end of a Nait XS2

Just received the toughened 8mm polished glass I’d ordered to use as additional isolation plinths… get that sorted tonight.

So far, while the TQ silver II is still far from burned in, it’s changed enough to know that I haven’t lost the nice bass from the TQ Black and, the highs aren’t harsh… sounds very open. Still needs another 3-4 days running I think before being able to see how they’ll turn out. So far so good though.

I would explore new speakers.

Speakers certainly look like the weak link there so maybe the 805 D3 as you suggest but the PMC twenty5.22 is certainly worth looking at too, they’re the speakers I have and sound mighty sweet on the end of a Nait XS2

That’s what I was thinking. I was thinking black box initially but I’m finding new cabling is revealing more from the hardware so it would be interesting to see what new speakers could reveal.

When I buy high end camera lenses, they only really shine when they’re on the higher resolution cameras… the more resolution the better otherwise you don’t see what they’re capable of. My local Naim dealer stocks both the 805 D3 and the Twenty5.22… which is just as well as there is no way I’d buy speakers blind, would have to be a home demo.

My local Naim dealer stocks both the 805 D3 and the Twenty5.22… which is just as well as there is no way I’d buy speakers blind, would have to be a home demo.

At that price you’d be daft not to

They are seriously good speakers and that’s over a grand off the price new of the i version that has recently been announced.

Definitely the speakers, suspect the SN won’t get the best out of the 805

Forgot to say I went in blind with my recent purchase of the ND5XS2 never having heard it. But with a Naim amp and CD player in my system already I was confident it would be a good buy and so far I’ve not been disappointed

Well, I’ve dropped them an email to see if they’re able to offer a demo and what they’d offer for the trade in for the CM6 S2s. I have to admit they look lovely… but I’d rather hear them first! Well see what they say.

What I’m finding is that with all th e cable upgrades, the ND5 XS2 is getting better and better on the SN2. Getting some real nice glimpses of what the TQ silver II are going to be like. They’re like a black box upgrade, very happy so far.

You’ve got a nice system there, but in a small space .

Is it time to move it into a bigger room ? Perhaps running an Atom with the B&W whilst putting some floor standers (Again B&W)

I know what you mean… but I do most of my listening in the office so for now (all really), it will stay where it is. For the size of the room I’m nearing the end game in all fairness. Probably why I’m thinking of speakers rather than changing anything else, which would require a bigger space to get the most out of it. Certainly don’t see changing the SN2 as I don’t need anymore power. I’m at the fine tuning stage, which is very nice and fun finding little ways to make improvements.

If the guy doesn’t come back about the speakers, I wouldn’t be heart broken… I’m really enjoying what I have at the moment so there’s no rush

I’d rather get the finishing touches right! 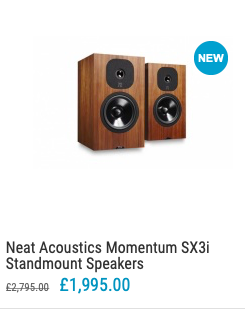 I think there are some Neats that might fit the bill, tuned to the Supernait - there is a very substantive discount available on the Neat SX3i of around £800, and they are a firm based in the North East (lovely people)

Look good… my local Naim dealer stocks them as well. I really hope he opens for demos before too long.

That said, listening to New Moon Daughter by Cassandra Wilson on Qobuz 192/24 and it sounds amazing! Any new Additions would need to be really good! Feel lucky to have found Naim… I know it’s a modest system compared to many but they really do make amazing gear that can really benefit from good cables. The missus just can’t get her head around the cost of the cables… and that’s when I declare them to be half the value they are

I have to admit they look lovely… but I’d rather hear them first! Well see what they say.

Yes I’m a big fan of their slanted design and I think they sound as good as they look. I’ve got mine about 1 inch from the wall but because they are front ported there’s no booming at all and that could be something to think about in a small room. They’re built like tanks as well, the 22s weigh in at about 10kg each. PMC are obviously confident of the build quality because they come with a 20 year guarantee.

Good to know… I moved the unites 18" off the wall to to give the CM6’s space to breath. They work well like that, no booming but it would be nice to regain some space!

Might try calling them tomorrow… not sure if they are going in or not at the moment. How are they in terms of detail… vocals and imaging. The CM6 S2’s are really forgiving in terms of imaging. I have a sit/stand system for drawing / photo editing and sound stage/imaging holds up very well even when I stand up. Provided the tweeters are ear level or below.