Why do accidents happen after you've decided they probably won't? (After an otherwise constructive day!)

Up early, drove to the log burner showroom and as I had some tarpaulin in the boot decided to get a cubic metre of seasoned wood as my location makes delivery tricky.

Naturally as soon as the crate came out for me to load up the heavens opened, but thankfully that quickly settled.

Arrived home and spent the next few hours unloading and stacking the logs.

At around 90% done I’d had enough and thought I’d have a rest but for some reason pressed on, when I finished I felt very satisfied.

For no good reason decided to move the car a few feet and thought I’d declutter the drinks holder of 2 nearly empty cans which had been there several days.

So rather cackhandedly holding two phones, specs and 2 aluminium cans thought I’d be able to manage to carry my Apple Watch as well which had been in the driver’s door pocket.

My brain had evaluated this was precarious but I pressed on, then stupidly decided to pour the dregs of pop from the cans onto a bush.

The Apple Watch dropped and the face hit the flagstone below with a subtle shattering noise - I knew before flipping it over that the glass was in smithereens.

What is this odd phenomenon? I seem to do this a lot - I perceive a small risk of some kind but go ahead anyway and what probably wasn’t that likely happens. 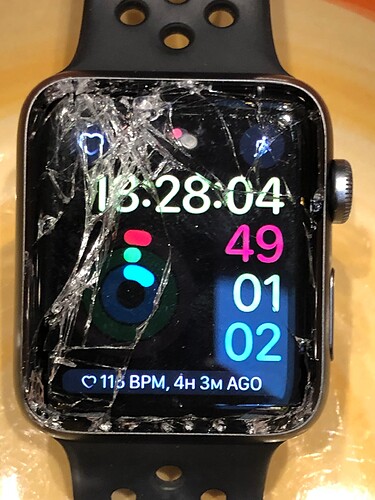 Yes it does happen i had two coke cans in my right hand with a few dregs left, something in my other hand….being right handed i opened the door latch and the contents spilt on the carpet. I sort of knew it was going to happen but could not quite stop myself😥

It’s not just you. I frequently find myself doing something stupid that I know will likely end in tears but press on anyway in the blissfully happy expectation that it won’t.

That’s despite 68 years’ experience that it usually does.

It’s a well known phenomenon: the triumph of hope over experience. It happens to all of us…

It happens to women too. My wife knows the risk of something bad happening if she leaves her phone in her pocket while using the toilet. But funnily enough that particular disaster hasn’t reoccurred since Apple started waterproofing their phones properly! It’s almost like Destiny knew that that particular game was over! 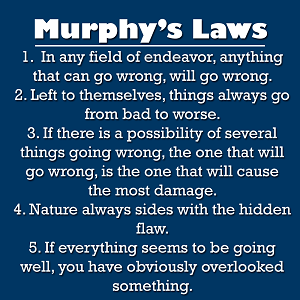 The thread title perhaps doesn’t explain this oddity (so I’ve chnged it) but often I notice 2 factors:

2 - Perceiving something as risky but deciding it’s ok to carry on. More often than not this might mean carrying too many things and one drops or tips something (eg mugs/glasses from upstairs/kids rooms when filling dishwasher to minimise trips) or balancing something slightly precariously but evaluating it won’t fall but of course it does! Here I think you’re telling yourself you’re doing or have done something constructive but are maybe trying to be too clever or efficient.

There may be a 3rd factor - distraction - I got distracted today by a slightly shifty looking chap watching what I was carrying from the car and I think only then decided to pour the dregs out outside rather than in the kitchen.

Pretty sure this is governed by Sod’s Law.

Arrived home and spent the next few hours unloading and stacking the logs.

Goodness, how big is your cars boot?

@Skeptikal is using name most of us in polite society refer to this as.

Not big enough or I’d have got 2 lots

I’m quite slow at loading/unloading things like this but back seats down so had filled boot/back seat area and rear passenger footwells. It was all loose wood, quite a slow job to carry it from the roadside to the rear of the house while being fairly careful to keep dust off the car upholstery. In the past if I’ve carried too much I’ve dropped the odd log and nearly scratched paintwork. It’s a lease car and I’ve already kerbed the alloy wheels during an emergency

I don’t have a dedicated log store currently and my ‘go to storage places’ are already full, so had to improvise with an old pallet/bricks and a large garden umbrella to keep the rain off!

I need to get rid of loads of stuff in the garage to make some space, but was trying to visualise a log store where I have an old shed up against a wall , the roof has collapsed on that so trying to figure out if I can repurpose it as a log store or just build one in its place!

I do this a lot too, it’s not laziness,(no being bothered to make repeated trips to safely carry items from A to B), rather a personal challenge that if I pull it off, I’ll get a sense of satisfaction. A classic weekly one for me is the walking out of the house to the garage with umpteen bottles for the recycling, I’ve got them tucked under arms, between my legs, anywhere I can fit them. The challenge is to waddle to the garage (with keys in my mouth), trying not to drop any en route. Sometimes I do, sometimes though…

It happens to women too. My wife knows the risk of something bad happening if she leaves her phone in her pocket while using the toilet.

Someone I knew once lost their pager into the lavatory - suspect that wasn’t a fun conversation trying to explain to switchboard what had happened!

I notice that these things happen to me more often as I’ve grown older, as some might even call me ‘elderly’ these days.

I think that age may have something to do with the frequency of such things happening.

Shakespeare’s famous ‘Ages of Man’ speech may have nailed it 400 or so years ago.

I suppose that that may have depended on what went into the lavatory immediately before the phone.

I suppose that that may have depended on what went into the lavatory immediately before the phone.

So, is this a formally recognised ‘thing’/behaviour with a name?

You could almost consider it a sixth sense or premonition you ignore, perhaps it’s just poor judgement?

The mention of pagers takes me back. In those days I had a pager but no one had mobile phones. So if the pager went off I had to ring in to a call centre to get the message. We had one phone at home and if my wife or I were in one of those phone calls with friends or relatives that just went on and on, test mode on the pager gave an instant answer. “Bleep, bleep, bleep, bleep Ah David’s (or my) pager has just gone. Have to clear the phone now. Sorry! Bye bye.” Hang up.

I must check but until very recently Mrs AC had a work pager she always forgot to turn off or annoyed with low battery sounds or alerts when she wasn’t working. Not sure she still has it as they’ve migrated to WhatsApp which is even worse.

We’ve a word in my NE Scottish dialect that might cover this - ‘thran’. It’s an adjective that describes someone who does something they know is wrong but they do it anyway. Might be in more wider usage but it was certainly bandied about in my childhood