I have 1988 vintage Nait 2 one owner and 62/hi/ 140 serviced 2nd owner. I am constantly fighting with an over bearing midrange mostly on CD my vinyl is working pretty good. it just sounds forced or resonant. However the Nait is smooth and relaxed and so much less grating. However the Nait is soft in the base and lacks some of the preciseness and overall detail. I tried getting the separates serviced and wow it fixed a lot but still sometimes I just grit my teeth. Never on the NAIT does that happen.
Ken

What’s your source and speakers?

since both use the same source I don’t see it as that important. I mostly use a modified original Planar3 with out board motor but the original motor and a Dynavector 20x2 with a Lehman black cube se2. Also have an original Rega cd player with MSB link dac nelson mods. NAC A5 into Meadowlark Kestrel hotrods. But I am referring to the amps both in the same system. I also tried Linn LK100 and a linn pre but it just didn’t time the bass right but was tempting as it played with more dynamic slam and way louder. But I rarely listen loud. Bu t really I am addicted to the timing.

The source is important and it’s likely that the deficiencies in the Rega are being revealed by the pre/power combo. The Nait 2 is nice but even that will benefit from a better source.

This is normal Ken. The Nait 2 (and slightly more so with Nait 1) are more transparent / less coloured. The Nait 2 will even hold up pretty well against modern amps in this respect and, therefore, can match with modern digital sources. Both your separates and Nait were voiced for vinyl but the separates lack the neutrality to sound 100% right with digital. But as I’m sure you know, The Nait lacks grunt to fully control many speakers and can sound a bit ‘thin’ on a lot of material.

Is that because of different input boards for cd, or are we talking merely phono?

I think the 62/Hi/140 is presenting you with much more of the music - warts and all.

But there must be something amiss further up the chain, with your source. The 62/Hi/140 should not make you grit your teeth. It should sound fantastic. My digital source plays through my 72/Hi/180 - it sounds superb. So did my vinyl deck.

The Nait 2 (and slightly more so with Nait 1) are more transparent / less coloured.

May I ask why ? The 62 the OP has was originally the second best Pre that Naim sold. Why would it be less transparent and more coloured than the bottom of the rung Nait 2 ? Did Naim go wrong somewhere ?

such as 110 (or 140 when I owned one). I don’t know where the coloration comes from, whether it’s more the pre or power amp side but none of the boltdown/CB/Olive pre/power amps I’ve had, including SNAPS/HICAP, could beat Nait/Nait 2s in terms of transparency/neutrality. Not heard 52/PS/135s though. All were Naim/Class A serviced. But I don’t actually know why. Perhaps it was side effect of increased power back in those days. A modern SNAIC 4 does help clean up the sound a bit, although I prefer the originals when using vintage gear.

There’s no way a Nait 2 is transparent and neutral! I bought one as soon as they were available and loved it but…

I replaced it with a 32-5/Olive 90 which was so much better and I kept this combo for years. It was fronted with a very decent spec LP12 though.

Both the Nait 2 and 62/HICAP/140 are very much from the vinyl era. In my experience Naim amps from this time can sound much as you describe - a bit hard, pushy, unforgiving and relentless with CD sources. They worked especially well with a contemporary LP12, which tended to sound a bit soft and flabby. The combination far exceeded the sum of the parts and was magical, especially with Linn or Naim speakers. The classic flat earth system.

As far as the Nait 2 sounding softer goes I can only offer the following observation. When I upgraded my 42/110 by adding the SNAPS power supply I was initially unsure if I liked the effect. The sound was certainly more focussed and immediate and there were clear musical gains but at the same time the presentation seemed harder and a certain slight softness in the 42/110 had disappeared. I decided that the slightly harder presentation was a result of more realism to the sound and was not really hardness as such but rather simply the result of a more focussed and tighter sound.

Great comments. I demoed the separates vs the nait2 a couple times and ultimately the clarity and detail and especially the bass swayed me however I will not give up the Nait 2 as I know it will never disappoint. Actually I did have some similar issues on vinyl I forgot about and that was fixed by dropping the gain on the phono. I wondered at that time if it was a bit overdriven. I have looked at attenuators but they get the best reviews. I may try it to see for myself. Note this is not at high volume. Happens at any volume 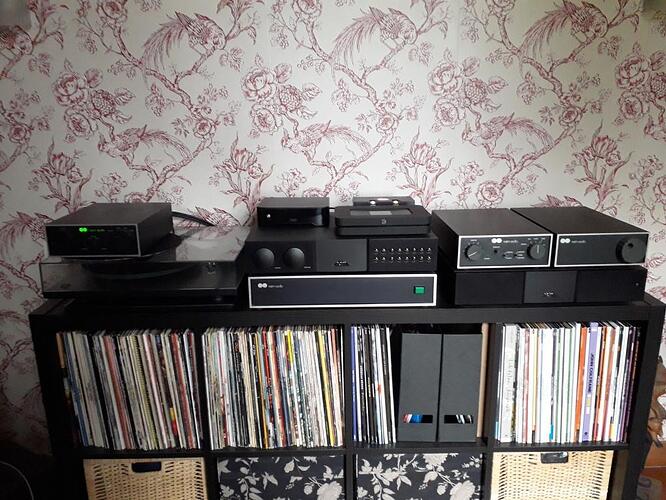 HC/32.5/250 vs Nait 2. Both feeding the dreaded A5’s. Music from Joni Mitchell. Pink Floyd and the Rolling Stones via stream on the Node plus Qutest.

The Nait 2 sounds fine at low vols but as you crank it up the mids are left behind. Still plenty of bass and lots of top end. I really can’t find much missing at the two extremes, just most of the mids disappear. The Stones become wearing, PF sounds a little muddy but never wearing. Joni sounds sweet but even her toppy notes and the clarinet on Played his song for free are managed well by the Nait 2. Again she doesn’t get wearing but does sound a bit thin. All compared to the 250 set up.
Male voices seem to suffer most. Just playing Meatloaf and his softer passages are fine, but as he belts it out then the sound suffers. " I don’t know what it is but it just won’t quit" Everything clear as a bell but loud = raucous. The bass on the drums is good though. Obviously not as good as the 250 but no slouch either.

The Nait 2 can still perform.

yes I forgot the separates hold together at higher volume. I have been wondering about more efficient speakers for the NAIT2. I don’t play loud too often any more.

I used the Spendor’s here as I know the A5’s need a bit of heft to get control over them. Even so the little Nait2 performed well enough.

Edit. I am sure there are more efficient speakers around now which would suit the Nait2 well. I did run my av speakers for a while on the Nait2 - Dali Oberon 5 though again only in a bedroom, not high volume.

The Nait 2 has that little something that I have not heard from other Naim amps. The sound is fast and immediate with some roll-off of the frequency extremes. The soundstage is contained in an ellipse shaped bubble starting from the outer edge of the speakers, expanding to the front and back. It’s not very wide but quite deep and it have some height.

I think most people like the sound of the Nait 2 because of the consequences of it’s shortcomings. It brings the whole medium frequencies (where the music lies) very clearly upfront without being impregnated by bloated low frequencies and sizzling highs. Otherwise, it doesn’t try to do things it wasn’t designed to do.

It is also a very cute little box and doesn’t cost a fortune!

It is also a very cute little box and doesn’t cost a fortune!

Have you seen the recent prices?

Over the past 20 years my Nait 2 (first Olive, then CB, always serviced) has been hooked up to a plethora of sources and speakers. I have also been able to compare it to Olive and Black integrateds and pre-powers (not CBs).

It is a sweet amp but creating a balanced and rewarding system with it requires some care, with some combinations punching well above their weight and other combinations proving less satisfying.

In my opinion, and in my room, and to my ears, they like speakers that are an easy load and sing by themselves. Obviously there are various flavours but ones I found to work well are Royd Coniston R (I have those) and Minstrel, all older Rega speakers, little Neat standmounts such as the older Critique and Petite and the newer Motive SX3, also Naim nSats, Linn Katan and even some Shahinians.

As for sources it really likes source-first. Analogue shines with for Rega a minimum Planar 6 or a Majik-level Linn LP12 or similar. Plus a cartridge that suits the phono board (there is a selection) or more universally a nice phono stage (but that somehow goes against the “integrated” bit IMO). Also all Naim tuners are a superb combination.
Digital works great with the CD5 XS and the DAC-V-1 with a nice digital transport (have not tried the nDac with the Nait 2). There a slightly attenuated cable works best, too bad we don’t have Flashback anymore to make those.
Finally I use long lengths of NACA5 with Naim plugs which helps. Having (dedicated) mains and earthing in your place sorted out by a certified company also makes an audible difference.

I have found that many of these approaches also work for shoebox Olive pre-powers (and thus likely for their CB predecessors as well). The mentioned pre/hicap/160-180-250 combo’s are really in a different league and don’t have these caveats (probably other caveats then but their owners would know better than I).

All this to say that in your system description I don’t find any of the items I listed above that I know work well. So at least it doesn’t surprise me that you have big differences or extremes between an unserviced Nait 2 (the servicing makes a huge difference in clarity) and your serviced pre/power. As much as they will always produce a different system outcome they should both be comparable in musical capability and house-sound, which you can then choose between.

Many owners here of both the Naits 2s and shoebox pre/power combos so you should get plenty of feedback. For my part I’m not trying to criticise anything I just hope these thoughts help your quest, good luck!