Is there a reason why Naim uses the glass shelves and balls/cups I would have thought this would be more resonant that something like wood and could perhaps ring too. Is there some science behind it?

There’s fair bit about this subject on the current forum, and lots on the old forum. After trying many different alternatives, the favoured material for the shelves was aluminium plate, however its very expensive to make perfectly flat - the SL2 interface plates were made from the same stuff and Naim had plates made up that are still used in the factory for perfectly levelling the metal feet on the top end kit. A surprise though was how close a certain type of glass got to its performance. Although glass could never quite achieve the same flatness, its was much easier to make, less costly too, and looked nice as well. Hence that what was chosen in the end.

I remember speaking to Naim about the Fraim on a factory tour, some years ago. The Fraim is a clever combination of materials, with the wooden shelves, the steel cups and balls, with the glass on top. I guess it would be easy to try replacing the glass with a sheet of wood if anyone was so minded.

John Watson of Mana used to say he decided to use glass after hearing the effect of putting an alarm clock in contact with a window. It picks up vibrations really easily. 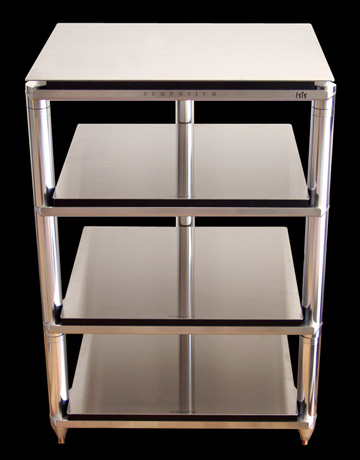 I have wondered this. Indeed, I wonder why they use shelves at all. I stopped using any shelves some time ago (the feet of the units are supported by smallish stub supports - nothing under the units at all. Looks good, and there is nothing to pick up any vibrations.

I often wondered the same thing. When it’s all said and done, it’s a matter of choice. With that being said, Nice to be back!

“I have used the Fraim with standard glass, Corian, Sonority regular shelves and Sonority roller Shelves.

The Corian seems to benefit over the glass when there is any component with some compliant suspension within (552, CDS etc) but not so much when there isn’t (Supercap etc). The Sonority better both in all ways, with the double-layer Rollershelves c/w ceramic cups/balls being significantly better to just the ‘regular’ Sonority shelf (which is better than the Corian). “

With that being said, I finally picked up a corian shelf from Tyler @ Next Level.

Might be my imagination but in the last week or so I’ve noticed less humming! who knows.

Next upgrade another corian shelf next week and 5 glass shelves. Naim spec’s I guess!

Nice to check in on you guys, it looks like the ND555 is the new kid on the block DB finally bought in!

PS. Briks I recall some years back the glass was better for the amps and the corian for type mentioned above.

Nice to see you back!