Need to change my power blocks and after some research settled to either one of these two models, I have some experience with the Wireworld but none with Titan Audio, tried reaching out to Titan folks to inquire about the wiring scheme of their power block, not sure if it is a full star wired PB or not. They never responded to any of my emails, so curious if anyone here knows whether these are indeed star wired or not.

This the inside of the 6 socket Wireworld Marix-2
Its not full star wired (the so called “star” config is actually called radial when used in power circuits) there are 3x L,N&E radials going to each pair of sockets, each radial is then linked to the other socket in that pair. 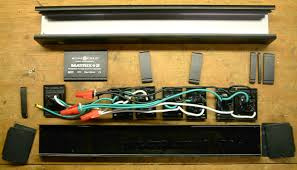 I can’t find any internal pics of the Titan NYX so can’t be sure, but some www blurb says “…
internally the NYX incorporates its fully hard wired design, with each socket being independently wired … there is no loss of current from one end of the block to the other … other blocks use a bus bar systems”.
This sounds like they are wired in a radial config.

Personally I’d go for the NYX, I repaired a Matrix-2 a while back & was not impressed with the build quality.

The reflex ultra g3 is much better than the wireworld matrix 2 it replaced in my system for sound quality. But it comes at a price of £1300, so really should be good. Quite a few on the forum are using these.

Interesting comments with regards to the WireWorld quality, I had one short-circuit on me when I was unplugging one the devices, massive spark and circuit breaker went off… luckily no impact on the equipment…

I have only one socket behind my HiFi rack, and today this lone power socket is used by an MCRU power block to which all my gear is connected to (500/552/Chord Dave, UltraRendu, and some fiber ethernet-optic converters)

Really keen on changing things around and having the NAP500 powered via the wall socket directly, and then using another socket located farther away via a longer extension chord/power block to power the rest of the gear, for that the Ultra Reflex G3 might be an overkill so considered the Titan Audio blocks as a middle ground.

Alternatively I was looking at PS Audio’s PowerPlant 12 but then read how these might be detrimental to the audio quality when powering something like the NAP500 so gave that idea up for the moment.

Was hoping it was full star wired but it seems it follows the same configuration as the Wireworld Matrix 2.

By the measure of the lack of responsiveness to the emails and inquiries I left the Tital Audio folks, as well as the lack of any phone number one can dial to check leaves me with very little confidence in their gear as well.

Which mains cable used between the wall and Matrix II ?

Alternatively I was looking at PS Audio’s PowerPlant 12 but then read how these might be detrimental to the audio quality when powering something like the NAP500 so gave that idea up for the moment.

@joeling uses the powerplant with the Naim Statements. Detrimental to audio? Not sure

I used a spare Naim PowerLine for that… Overkill perhaps, but it was lying around doing nothing…

@joeling, keen to hear your impression of the PowerPlant, which one are you using?

You can read the “ Statement + Utopia thread”. At the end Joeling says the Ps powerplant sounds better on his new system. But before was smoothing things a bit too much…

Thanks for the lead… going thru the thread…

Ordered a wireworld matrix 2 with Wireworld Stratus 7 power cable from Futureshop yesterday, will report back when it lands.

The stratus 7 has been suggested by futureshop, somebody or by yourself?
Looking forward to your comments, then!

The stratus 7 has been suggested by futureshop, somebody or by yourself?

There was a package deal on Futureshop, I was going to buy another powerline lite to use with the Mateix but thought I would try the stratus after reading the reviews/specs.

Have you got a full Naim system?

Yes apart from the turntable and phono stage. Tried an MCRU mains bloke a while ago but although it was more detailed it was also a lot slower and a bit boring sounding, so ended up putting the old Adsa one back in! Hopefully this Wireworld one will be better but will go back if not a decent improvement.

I’ve been testing for a few days the Naim musicline vs Matrix 2 power strip with standard Naim cable (therefore a comparison under the same conditions) in a system where only the amplifier section is Naim.
What I am experiencing as the main difference is a less sting sound, the total absence of harshness and less background noise with the Matrix2 compared to the Naim Musicline: with the Matrix the reproduction appears to me less tiring and hard (we are in the field of shades, very important for us of course …).
A question to the experts: I am not a great expert in comparison tests, therefore I hope not to exchange these things that seem to me positive points with actually a more dull sound and / or with fewer harmonics…

I bought a Matrix 2 earlier this year.

Really not that convinced by it.

I fed it with a Powerline and everything sounded very harsh. A standard lead mellowed the sound. I now have 3-4 things in the Matrix 2 and several others in a domestic extension lead and I honestly think it sounds better this way.

Maybe just bad luck with the sample, or just an issue of synergy (or not), but as with mains conditioners I’ve tried they do not necessarily make things sound better.

Is yours a full Naim system?

So much of this stuff is complicated by system synergy and for some reason the Matrix 2 for me in certain combinations just sounds too bright especially with a Powerline feeding it. Maybe I just prefer a warmer analogue sound and the Matrix 2 is more accurate - ultimately it’s an extension strip which is more sturdy than the average one - some people rave about them, I’m not personally convinced, but in their systems the Matrix 2 might just be more synergistic with their kit.