I’ve had a Naim NDX 2 for a month or so (absolutely loving it!) and have not been able to stream Wyldwood Radio at all - at any point, I don’t think. I’ve removed it and re-added it a few times. No apparent problems with other stations. It seems to be live and kicking online, so the station seems ok.

Any ideas? Anybody else successfully streaming it on an NDX 2?

Do I see the Comissioner @davidhendon bat light in the sky.,

Wyldwood radio is a tls1.3 https station only. It was broken on vtuner yesterday due to a legacy stream url going dead, now live again. Upgrade to v4.8 code and it will work again as we have a fully compliant https stack in it that will keep things running for many a year.

And on ndx2 def works. It might be a regional issue as licensing issues can restrict access to some streams in some countries.

@MarkB_UK has a quite UK sounding user name….

Just chased this one and we are tracking moving targets. The station have moved their servers again. Yesterday it was in one place…. Today somewhere else.

We’ll track them down and get vtuner updated.

And yes, I’m UK based, so it’s readily available on UK internet radio sites. I understand the internet behind the scenes pretty well, but not how streaming specifically operates - will have to do some research.
Basically I’m guessing a website can lookup the streaming servers dynamically but vtuner stores a static address? Frustrating, but… I’ll do my research

Anyway, I’ll keep trying over the next few days.

Again, many thanks for the responsiveness, very much appreciated.
Mark

We’re still investigating this one. Its failing on a https certificate issue for that provider, but unsure why at the moment. It was working about 1 day ago so there is something subtle on a security check is going on.

Wyldwoods streaming provider have fixed their certificates server side, so its working again.
On a side note JB Radio 2 was also affected as they host at the same provider.

Still doesn’t seem to be working for me…
I’m just using search to find the station (i.e. not a saved favourite) but after briefly showing “Connecting…” it reverts to stopped.

Searching JB Radio2 showed two results and neither of those would play either (I’ve never tried either station before).

Do I need to flush any local cache or similar on the device itself?
Or might it take longer to propagate?

Just thought to try naim.vtuner.com directly, and in fact when I find Wyldwood or JB Radio2 and download the m3u file (I don’t know how these work) and open that in Apple Music they don’t work either.

In contrast other stations, say BBC Radio 4 or Radio 2, their m3u files open and play fine in Music.

Just tried it. Seems to be streaming ok. 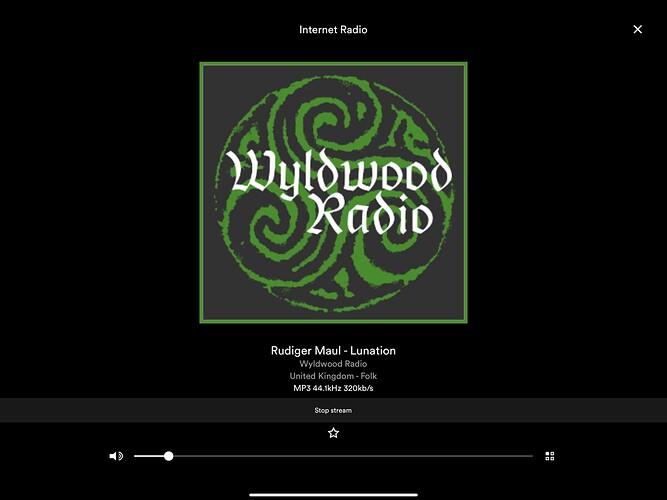 One thought - do you have v3.7.1 installed? If on v3.7 or earlier it won’t work as this service provider was affected by a https root certificate expiring.

The urls as advertised by vtuner are good. This is all to do with https certificates failing security tests.

I’ve got these running MP3:

Plus I’ve learned what the updates available icon looks like in the app, now!

All working - Wyldwood and JB Radio2 (realised there are two bandwidth versions) both playing fine.

Thanks Steve, and once again thanks for the really swift and helpful response, it is really appreciated.

PS. Now I’m quite embarrassed not to have actually looked inside an m3u file – only to discover it’s simply a URL!!! Ahem… I do work in digital, honest!

@MarkB_UK tell us a little about Wyldwood, please. Is it worth me looking up?

Hi Gavin,
They call themselves a pagan radio station – I have no real clue exactly what that means (it’s not occult or anything like that), but the music is “Folk, World, Spiritual & Ethnic Music”.

It’s generally quite mellow but they throw in some odd metal-ish, probably Scandi?, stuff here and there. I like Scotlander radio, too, which is more obviously celtic, but they’re akin, possibly along with Radio Paradise Eclectic mix.

Obviously I’d say give it whirl – I think you’ll know quite soon if it’s your bag or not.
Enjoy!

I suppose it differs from the Misty Moisty Mornings, and burly blacksmiths deflowering maidens of traditional English folk songs.

The big name in pagan folk is Omnia - you can find some clips on Yootoob. Wife & Daughter#1 are very much into it.