I understand the generally advised service timeline for this kit is c.15Y - but having had my 2 x PS’s done at age 13.5Y (both hooked to a CD555 - both DR’ed several years ago), these also having sat 12m unused while my house was refurbished, there are notable improvements in replay, even from stone cold.

The noise floor is much reduced, general clarity and detailing is increased, all this leading to the ability to play with more volume. And, typical of the warming-up of this kit, there should be more to come (fingers crossed).

Prior to servicing, there was a top edge glare & sibilance from CD replay, which has also been addressed/materially reduced - I had thought the primary problem was my room but now I’m questioning this assumption.

Suggested learning - don’t wait for 15Y. Based on what I’ve heard, a shorter timeline should apply - in my thoughts around 12Y.

Strange?
Most of the parts inside will have been changed when the DR was done …you would think that they would be good to go for many years after the DR upgrade

Just to ask --is the board with all the transistors and Tats cables /Connectors/etc that are removed when the 555PSU is DR’d worth anything to sell?

I find anything sells on fleebay

@anon23139555 - I can only assume it’s the new caps which are working their magic as the service sheet suggests it was only these and the logo which were changed.

@Diver41 - no idea on the redundant innards - I thought the DR-bit was only a small but meaningful circuit change. I’m probably wrong.

Um No Happy–It seems to be full Christian Barnard jobby!–I thought it may be of some value to a DIYer
/etc etc. 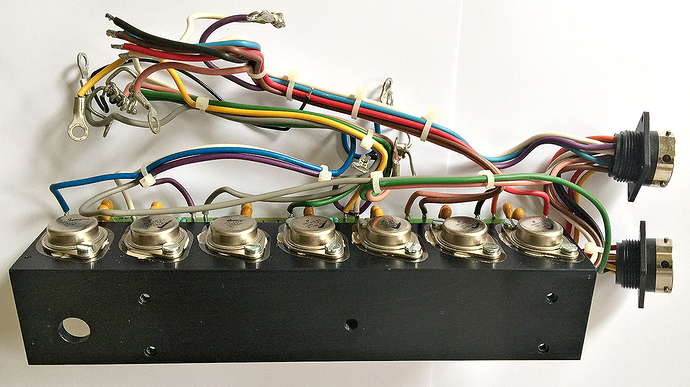 @Diver41 - thanks, and goes to explain the DR cost (several years ago). I suppose you could always ask for the bits - I’ve also always wondered what happens to the various bits of kit which are exchanged for new, when a material fault reveals itself early doors.

Back to my serviced 555PSs, based on what I’m now hearing, I’m coming to the conclusion something must have been sub-optimal for some time (perhaps more than a year) - which breeds thoughts that servicing should be <12Y’s - perhaps 10. I was always sceptical of the 15Y timeline. When my CD555 display faded away post track selection, the sound dipped very slightly - it’s no longer doing this.

This is a bit of a mad hobby/interest when you don’t know what things are supposed to sound like sometimes and whether performance is sub-optimal.

I would have thought that Naim would keep these parts for the very reason that they would not want them falling into certain dodgy hands - there are DIYers out there who will take parts and try to turn them into legitimate Naim kit, which then gets passed off to unwitting secondhand buyers

Here’s a NAP250 that turned up at the factory as one of a pair for service back in around 2005; 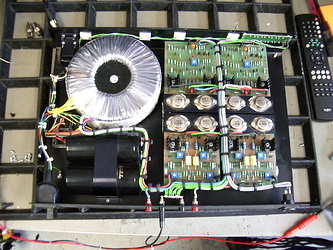 It looks OK, until you start noticing that little details are not quite right; The soldering quality is not up to Naim standard; cable ties aren’t quite as they should be; and then we realised the biggest difference of all - the chassis was scratch built but the alloy plate used was ever so slightly too thin, so in the event of a fault the thermal protection would not work properly.

To say the new owner was shocked was something of an understatement. Naim told them what could be salvaged - the amp boards, the transformer, the sleeve and a few other minor parts - and that from there the amp could be properly rebuilt. The bad bits would have to be scrapped. IIRC the owner agreed to have it built into a proper NAP250 by Naim service.

This is a bit of a mad hobby/interest when you don’t know what things are supposed to sound like sometimes and whether performance is sub-optimal.

During a recent rebuild I did made some tweaks to the cable dressing that’s made a big difference to the sound that I thought was fine before.

That is exactly what I tend to reproach to Naim gear: the cables forest, and cable dressing making such a difference.

When auditioning Magico speakers, with Soulution amps, I had a nice conversation about which electronics to blend with Magico (Naim, CH Precision, Soulution, Nagra, etc.).

When I mentioned the fact that cable dressing had a real impact on how my system sounded, the guy didn’t say anything. He simply smiled, and politely moved to another topic. He not even tried to tell me that Soulution had a different approach.

Yes, for me cables is clearly the thing don’t like about Naim

Thank you Richard I fully am in agreement and knew that this assembly could be used for
nefarious purposes and no, I would not sell it on the open market–as there is not much reason for me to
keep it I will offer it to my Naim service man for spares.
Concerns truly noted.

–not sure re the displays tho.

Re logos, on my Superline (H2-2008), I’d noticed it was less bright than others and it was only when tilted it up when packing did I see there was a lot of bleed - as I understand things from the dealer, the logo change is now included, noting the servicing is fixed priced now (as I understand things)……although I’m sure this wouldn’t apply to the FrankenNap250 Richard has pictured above.

I know some of the early network players/streamers have had screen issues - whether that’s just the item or some trait akin to the ‘burn’ which afflicted early plasma TVs, I’m not sure.

I’m comforted that Naim still have mechs for my 12y/o CD555, which hasn’t needed the mothership’s attentions (all digits crossed) - I hope suitable provision has been made for displays on the NP/streaming side.

A few days now since connecting up the serviced 2 x 555PS DRs to a CD555 and the music sounds so much better.

Enhanced detailing, separation, bass is getting tighter as things warm up. The one potential downside is that compared to pre-servicing replay, there appears to be far more energy/weight in the sound and the display, when on, is now sharper. It is a new experience - a welcome one but reinforces my thoughts that the PSs must have been some time over the service hill (so to speak). A review of speaker and room set-up may be required to optimise.

Once they are both warmed-in I’m going to switch them around on the analogue and digital feeds (keeping the plug-in order the same), as I’m wondering if one PS may be slightly better than the other.

I had my CD555 and single 555PS serviced/DR’d just before Christmas and it still continues to get better, so I’d not be in too much of a hurry to mess with things yet!

@Geko - out of interest:

1= was there anything amiss with the CD555 to drive the need for a service?

2= can I ask you to detail what this involved. I assume a mech-change is only undertaken when one fails and isn’t voluntary service work.

I’m not planning to switch things around until things have settled some more - probably a month or so based on previous experience.

Sorry it’s a bit of a late response.

No, nothing amiss with the CD555 + 555PS when it went for the service and DR’ing. I just wanted it to sound how a new one might sound. They did replace the mech as they weren’t entirely happy with something - not sure what though.

It sounds absolutely spectacular now. The CD555 is such a classic piece of design and over engineering I can’t help owning one!

@Geko - thank you for responding.

What you have said has whet my appetite to get mine serviced…!

Mine had a bit of a ‘moment’ yesterday, I think caused by the CD-reader software or somesuch getting ‘confused’, perhaps due to some handset commands being undertaken too quickly. A power-cycle appears to have fixed.

…as you say, it’s not a bit of kit I want to return to the mothership, although…