Asset UPnP R6.6 has been released

It appears R6.5 released 2 weeks ago had some problems, I hadn’t seen any of it, but here’s the list of issues fixed.

Thanks Mike. I had a funny glitch the other day, maybe it was 6.5 causing trouble.

Thanks for the heads up. Just installed it an it’s already fixed the problem with missing tracks on certain albums. Great!

Thanks Mike. I’m starting to become a whizz kid at doing these updates now. R6.6 is now installed onto my QNAP.

Has anyone tried adding a new album to the nas. I’ve just added one and Asset doesn’t automatically find it. This is a glitch we had a while ago. Is it just me?

Not yet, I’ll let you know.

If you just ‘touch’ the metadata of an album, it will be promoted the New Albums selection during the next scan.
I don’t have the automatic detection, but avail of a forced scan every 60 mins.

I’ve added two new albums and they are not detected until rescan detecting changes is used. I recall this happening last year and it being subsequently fixed. I’ve therefore raised it on the Asset forum. It’s a shame it wasn’t picked up in beta but having done beta testing for Naim I know it’s not that easy. Let’s hope it’s fixed soon, as it’s a pain to have to do it manually.

Thanks for the heads up on this one, I haven’t enabled the auto detect function since the previous problems you mention, simple enough to ‘scan for changes’ when loading a new album & I got used to doing it.
I’ll give it an other go when Asset send a fix, I expect it’ll be very soon.

It seems to have sprung back to life today and is adding new albums very quickly. I’ve no idea what was happening but am pleased it’s now working.

I’ve re-enabled mine, it seems to be OK, I removed one & it reacted to that, reinstalled that & followed that a new album & all OK.

HH: I’ve found it to be hit and miss as to when it adds the new albums, sometimes quickly sometimes not so quickly … but it does add them eventually … having a cup of tea whilst you wait helps.

Have added a couple of albums now and no problems this end.

Its been a couple of years or so since I have posted following the help I received on the initial set up issues I had with my Synology DS216 NAS from the ever patient and helpful @Mike-B!

My system is still NAC 272/250DR power amp/XPSDR Power supply and I have been very happy with it (other than a rare software error a few months ago resulting in the 272 having to be sent back via Nintronics to Naim to repair). I have used Synology’s Media Server to date and have had little or no problems but then I don’t have many classical/compilation/greatest hits albums or a desire for different album art etc which I understand Asset UPNP might be better for. Using Media Server and the Naim app I have generally found the layout by Artist, Album Artist, Album etc etc adequate for my needs so far although I appreciate you never know if there is something better until you try it. The importance of getting the metadata tagging right has been key and that was an initial learning curve resulting in a few re-rips. e.g where I ripped three albums by the same artist which had “and” in the band name, but one of the three albums was inadvertently ripped with “And” rather than “and”, and so shown separately to the other two, as if it was a different artist under the “Artist” or “Album Artist” etc tag on the Naim app. (The more regular issues have been with the Naim app playing up every now and again, but that has generally been resolved by a reset or in some cases uninstalling/re-installing). For my large selection of eclectic music, it has been ripped onto my NAS almost exclusively from cd’s by dB poweramp to FLAC level 5, or a few DVD-A or Blu ray 24 bit/96khz etc files to FLAC by DVD- Audio Extractor.

Despite Media Server working OK to date, I have read various references to WAV sounding “better” than FLAC on certain “old streamers” and so have been increasingly intrigued by transcoding the FLAC files on my NAS to play as WAV on my 272, which I assume is a relatively “old streamer” now. I cannot see in my DS216’s GUI that MS can transcode FLAC to WAV. I have seen references to this subject but have not found a specific view on whether WAV (transcoded or “as is”) sounds better/different than FLAC on the 272. I know it is down to personal opinion and ears and I will probably download the 30 day trial version of Asset to try (assuming it will include transcoding to WAV) but it would be good to hear any views on whether it is worth me changing to it, given my comments above. I have also recently ripped a few cd’s straight to WAV on my NAS to do some blind A-B tests for those. Thanks

Hi again Oddtimejon, I found WAV to sound a tiny bit better than FLAC on my NDX when I first started streaming, so I bought, converted & ripped all to WAV (all except DSD)
Another reason for WAV with me was Synology’s Media Server UPnP was pants with transcoding as all 24 bits where played as 16 bit, plus transcoding made a pigs ear of gapless album tracks.
I went to Minimserver which fixed the gapless problem & that served for a while, but I didn’t like the faff involved in setting it up.
Then Asset UPnP arrived as a development project & I got stuck into beta testing it before it was released. It does it all as far as I’m concerned, simple to set up & use & although it’s not as good as Minim with the metadata permutations for classical albums; but I don’t have a big collection & the way I have set my metadata works for me.
Now with Asset & its excellent transcoding function, why have WAV? So I had a think about converting all the WAV to FLAC, its easy to do with dBpoweramp, so after some verification checks, that got done.
It’s saved about 35 to 40% of HDD space & also as some of the www download vendors are no longer selling WAV & one (Q) in particular hasn’t a clue about it, FLAC to me seemed a good move.
I’m now very happy with converting the whole collection (except DSD) to FLAC & transcoding.
( Asset’s setting for transcoding is FLAC “play as” WAV)

Thank you for your quick reply Mike and hope you’re well. Just to clarify when you refer to Media server transcoding being pants, I take your point about 24 bit and gapless but were you transcoding from FLAC files to WAV at that time on Media Server on your DS218? As I said, I have FLAC files on my DS216 NAS but cannot even see that the GUI has the option to transcode these to WAV. Perhaps it’s one of the few Synology models that doesn’t. I can’t seem to find a definitive answer even in Synology website help.

were you transcoding from FLAC files to WAV at that time on Media Server on your DS218?

Hi again, I found that FLAC 24 plays as 16 when I first started & was experimenting at the time, that’s why I chose to go exclusively WAV.
It maybe that Synology MS doesn’t do this anymore, but it’s of no concern anymore with Asset UPnP.

As far as I’m aware Synology DSM works on all models, the how to do it instructions are in the Media Server section of the manual & online under DMA Compatability

It transcodes all the popular codec to either WAV or raw PCM which is practically the same (not sure which, but I’ve done it) 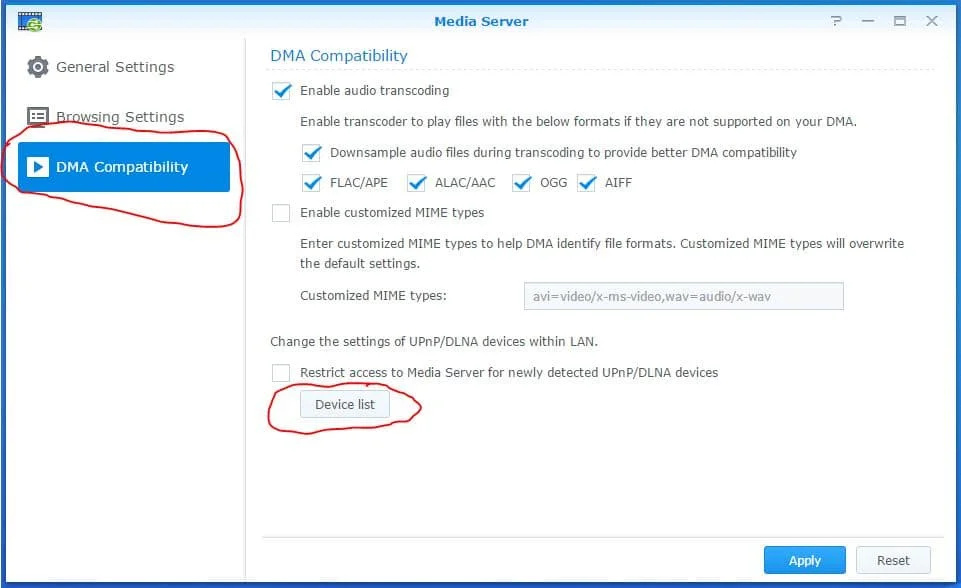 OK many thanks @Mike-B and @jmtennapel.
Mike, I have been into that DMA settings page of MS many times and realised it was almost certainly the only place where transcoding to WAV might have been possible, but it was not (still is not) obvious to me that by ticking any of those boxes it is saying that my FLAC files will be transcoded to WAV or PCM and then played as such on my 272. Sorry if I am missing something but by ticking those boxes (including AIFF which is PCM essentially?) all it is saying to me that it will play any of those formats if they are not “supported on your DMA”. But surely that is not a problem that I have as all those formats are supported on my 272 as far as I am aware. i.e. the 272 plays WAV and FLAC. I just want to effectively “convert” (maybe the wrong phrase technically) my FLACS on my DS216 to WAV before they are played on the 272? And if I have understood the MS tick boxes in this DMA section correctly then MS won’t achieve this and I clearly need Asset UPNP purely on these grounds alone?

2 other questions please Mike: 1) you HAVE checked downsample in your screenshot but as you say, I would not have thought that should be checked? ; 2) why have you circled “Device list”?

Here is my current screenshot (also note the restrict access box ticked at the bottom which has not ever caused any known issues but I cannot recall why we did this when I had the set up problems): 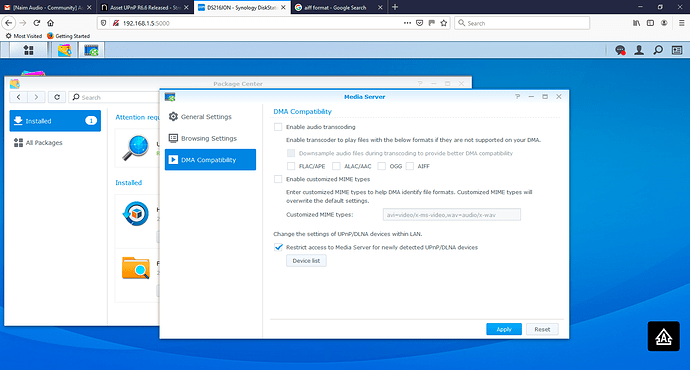